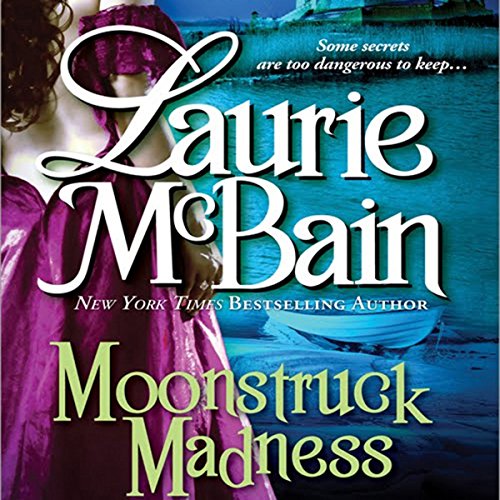 By: Laurie McBain
Narrated by: Marian Hussey
Try for $0.00

She's one thing by day, something else altogether by night....

After escaping the slaughter of her clan at a young age, Scottish noblewoman Sabrina Verrick provides for her siblings by living a double life, until the night she encounters the Duke, and her secret and all she holds dear is threatened....

With his inheritance at stake, Lucien, Duke of Camareigh, sets a trap for the Scottish beauty with the piercing violet eyes, never imagining what will happen when the trap is sprung.... As their lives become irreversibly entangled, Lucien and Sabrina become each other's biggest threat, as well as their only salvation....
©1979, 2011 Laurie McBain (P)2012 Audible, Inc.
Historical Fiction Regency
Show more Show less

"The plot has imaginative twists and turns, and the backgrounds are lush and evocative. It's good, satisfying fun." ( Publishers Weekly)

What listeners say about Moonstruck Madness

What the hell is wrong with people?

So as a dude this book had a part of the battle of Culloden.. so I thought it might be pretty interesting. Girls like this stuff? A complete asshole and a douch... Using people and complete dick moves and people just forget and forgive? If this is how girls dream then goddamn I'm glad I'm a man... Holy hell I just cant.

Not sure what the problem is I bet I could not count 10 books in my 50 years of reading I didn't finish.....seemed it woukd never end!

Classic Romance with a successful storyline

I will recommend to all my hopelessly romantic friends to listen to this audiobook. This is the first romance novel i have purchased as an audiobook, certain that I would not enjoy it as much as reading off the page, I intrigued by the experience and will encourage my friends to try it.

What other book might you compare Moonstruck Madness to and why?

Moonstruck Madness brought to mind a novel by Virginia Henley titled 'The Pirate and the Pagan'. Each novel is similarly intricate in building momentum in both adventure, suspense and romance. Both have strong headed females who have had to put away their childhood and disguise themselves as highway men. Although Virginia Henley does a better job as a writer to make a reader feel like they are en wrapped in the world and characters she has created, Laurie McBain has done an excellent job herself.

What does Marian Hussey bring to the story that you wouldn’t experience if you just read the book?

Marian Hussey has an amazingly well pronounced and clear voice that is almost angelic. I would happily listen to another narration by her, even though I did not feel she did a good job with the character of Lucien..
I can also pronounce certain words better than i could before (or I was unknowingly pronouncing them wrong all these years).

Who was the most memorable character of Moonstruck Madness and why?

Sabrina of course being the main character and so dominating throughout the book. However, by the last chapter and in finishing the novel Richard was the Character that remained with me the most. I think it's because he was the cause of the events in the end that eventually brought our two main characters back together. Also, Richard was at that very awkward stage, there's definitely another story to be told there (as the awkward child becomes a man etc.).

Started out good, but went a bit downhill.

This is an old book, first published in 1979. The story started out real good for a while. But eventually went a bit down hill. I really liked the hero and the heroine in the beginning. Then heroine became too annoying, and stupid. Making stupid decisions, always had to be her way. I was glad it finally ended. The author drug it out adding things that didn't necessarily need to be included. Needless to say I have read two very old books back to back and have had my fill of older HR books.

There was a lot of dialogue throughout the book which I did like, (I do like lots of dialogue in my books) There was sex in this story, of course not graphic but there was fondling and "lovemaking" that is how it is referred to in the book.

The narration was very good. Marian Hussey did a great job, everybody had their own distinct voice.