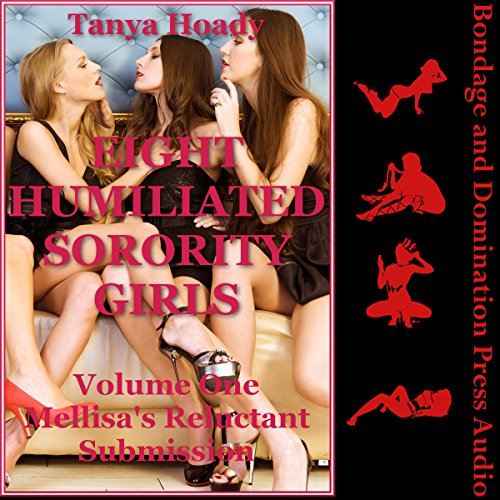 In this story, eight sorority girls attempt to flirt their way out of paying for pizza on a Friday night. This delivery boy isn't playing ball and given they have some things going on the university wouldn't be happy to hear, he decides to leverage his advantage. If they can't pay in cash, they'll pay by submitting to his every whim. Melissa is first up, and that means plenty of humiliation as she has to address him as "Sir" and pleases him with her mouth!

"Come on, Sweetie," another girl said. "You can do your good deed for the day."

She smiled in a sultry way. "Melissa."

"Well, Melissa," he said. "Pay me. I get charged when this happens. Right out of my check."

She kept trying. "But we'll be soooooooo thankful."

Joe shook his head. "Unless you're planning on putting it on my dick, how about you shut that mouth and pay me."

Melissa looked like she'd been slapped, and Joe felt a burst of happiness at that. He also, oddly, felt arousal. It wasn't strange to be turned on. Hell, his girlfriend had done it to him for a day and a half. What he found strange was how it turned him on in particular that she looked like she'd been slapped and that was what did it for him. The rest of the girls laughed but Melissa said, "Asshole." She opened a box and took a piece. "All right everyone. Cough up some money."

The girls giggled. "What's the matter, don't want to suck off the cute delivery boy?" The girl who spoke was actually stunning, with beautiful deep blue eyes. She grabbed a piece and started eating. A few of the other girls began digging through their purses and a few more started on their pizza. He looked around. On the table were a bong and a baggie. There were a few rolled joints as well. He was particularly interested in the handles of vodka and rum because most of the girls looked like they were freshman or sophomores, not yet 21.