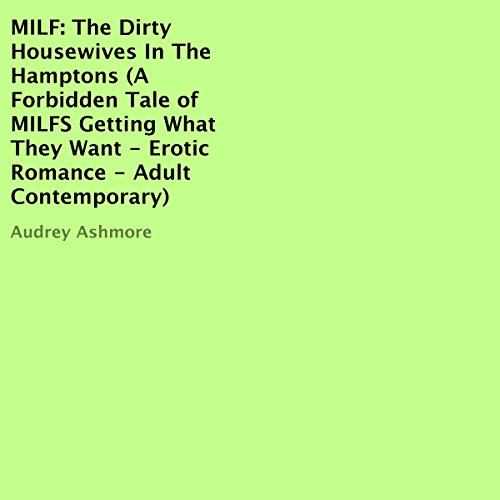 By: Audrey Ashmore
Narrated by: Trevor Clinger
Try for $0.00

Jack, struggling to pay off his student debt, is complaining one night about his bad financial situation. One of his friends suggests doing handyman work for the dirty housewives of the Hamptons. It's a housewife trade-off: he offers them sinful moments and they get to feel the heated pleasures of younger flesh again.

Maria is a sexy, Swedish housewife whose husband is gone most part of the year as he plays for the NHL. She is longing for someone to ravish her. Secretly, she longs for being touched with passion and sensuality.

Frances, one of her Hampton neighbors, is privately educated, a well-spoken broad. She married into "old money" that can't satisfy her. France's sex life with her husband is rough and ready, but she secretly desires a chance to dominate a younger hunk.

Sharon, known as the Hamptons' slut wife, is an adventurous blonde that was first married to an old oil tycoon. No one knows about her first marriage and sinful ex-addict past. She hasn't been tamed and doesn't see anything wrong with guilty pleasures. Her sex life knows no bounds, and she f--ks everything that moves.

Fiona, another high-powered Hamptons businesswoman, is being ravished with fetishes every time she ventures out in the grimy downtown. Fetishes keep her interested when her husband doesn't.

Finally, there's Annie, the queen bee, who is married to a nice IT guy who is filthy rich. Always looking for something to fulfill her urges, she meets Jack one day. Annie's body is aching for someone to touch her sinfully so she surrenders to Jack's guilty services. The struggling, handsome DIY guy hasn't told her about his plan to ravish all the other dirty housewives of the Hamptons.

I received a free review copy in exchange for my review

I couldn't get past the monotone narration. Save your money and my advice to the author is hire another narrator please..

The narrator was like a machine. He read without passion. Would not buy again, sorry bought this one.