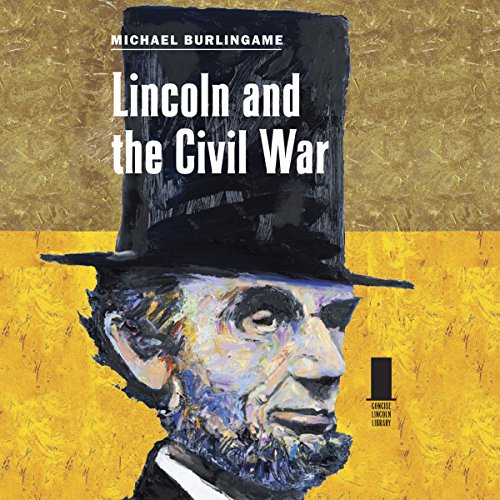 Lincoln and the Civil War

By: Michael Burlingame
Narrated by: Charles Bice
Try for $0.00

In Lincoln and the Civil War, Michael Burlingame explores the experiences and qualities that made Abraham Lincoln one of America's most revered leaders. This volume provides an illuminating overview of the entirety of the Civil War and Lincoln's administration, focusing on the ways in which Lincoln's unique combination of psychological maturity, steely determination, and political wisdom made him the North's secret weapon that ultimately led to supremacy over the Confederacy.

When war erupted in 1861, the North - despite its superior economic resources and manpower - was considered the underdog of the conflict. The need to invade the South brought no advantage to the inefficient, poorly led Union Army. In contrast, Southerners' knowledge of their home terrain, access to railroads, familiarity with firearms, and outdoor lifestyles, along with the presumed support of foreign nations, made victory over the North seem a likely outcome. In the face of such daunting obstacles, only one person could unite disparate Northerners and rally them to victory in the darkest moments of the war: Abraham Lincoln.

While Lincoln is often remembered today as one of America's wisest presidents, he was not always considered so sage. Burlingame demonstrates how, long before the rigors of his presidency and the Civil War began to affect him, Lincoln wrestled with the demons of midlife to ultimately emerge as arguably the most self-aware, humble, and confident leader in American history. This metamorphosis from sarcastic young politician to profound statesman uniquely prepared him for the selfless dedication the war years would demand. Whereas his counterpart, Jefferson Davis, became mired in personal power plays, perceived slights, and dramas, Lincoln rose above personal concerns to always place the preservation of the Union first. Lincoln's ability, along with his eloquence, political savvy, and grasp of military strategy made him a formidable leader whose honesty and wisdom inspired undying loyalty.

In addition to offering fresh perspectives on Lincoln's complex personality and on the other luminaries of his administration, Lincoln and the Civil War takes listeners on a brief but thorough tour of the war itself, from the motivations and events leading to Southern secession and the first shots at Fort Sumter to plans for Reconstruction and Lincoln's tragic assassination. Throughout the journey, Burlingame demonstrates how Lincoln's steady hand at the helm navigated the Union through the most perilous events of the war and held together the pieces of an unraveling nation.

The book is published by Southern Illinois University Press

"The author of the most deeply-researched and detailed biography of Abraham Lincoln ever written here provides a remarkably concise and authoritative overview of the Civil War. Drawing on his massive research, Burlingame selects anecdotes and details that effectively illustrate Lincoln's critical role." (Douglas L. Wilson, Lincoln Studies Center, Knox College)
"With a brisk pace and bracing tone, Michael Burlingame assays the titanic clash of the Civil War and the man whose personality and resolve guided the Union to victory. Those who already know Abraham Lincoln will find him alive on these pages. Those whose acquaintance with him is marginal will gain a full sense of the man and his destiny." (David S. Heidler, coauthor of Henry Clay: The Essential American)
"We have many books on Lincoln that really never needed to be written. This is one that did." (William C. Davis, Director of the Virginia Center for Civil War Studies at Virginia Tech)

What listeners say about Lincoln and the Civil War