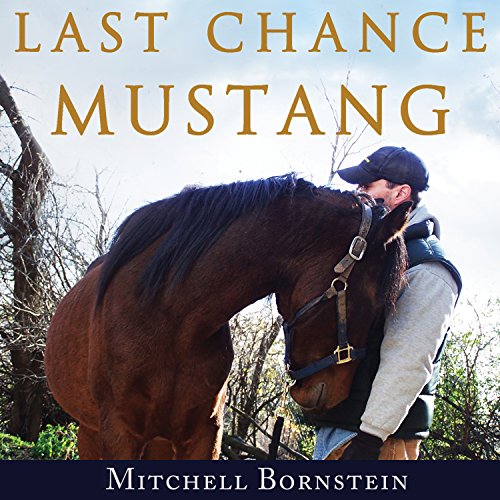 By: Mitchell Bornstein
Narrated by: Tom Zingarelli
Try for $0.00

Last Chance Mustang is the story of Samson, a formerly free-roaming, still wild-at-heart American mustang that was plucked from his mountainous Nevada home and thrown into the domestic horse world, where he was brutalized and victimized. After years of abuse, Samson had evolved into a hateful and hated, maladjusted beast - until the day he found his way to a rural Illinois farm, an ill-equipped owner, and one last chance.

Mitch Bornstein's task was to tame the violent beast whose best defense had become offense. He had 20 years of experience fixing unfixable horses, but Samson would be his greatest challenge. Through the pair's many struggles and countless battles, Samson would teach Mitch about the true power of hope, friendship, redemption, and the inspiring mettle of the forever wild and free American mustang.

"A tough but engrossing tale of redemption, perseverance, and the bond between a horse and trainer." ( Booklist)

Example of the commitment necessary to gentle a truly wild misunderstood and abused mustang. The writer uses every opportunity to expose the corrupt history of the Bureau of Land Management and their dishonest and cruel handling of of Mustangs they are supposed to protect. Hopefully it is in time to save the valiant breed!

loved the story of Sampson, it made me laugh and it made me cry.
The information given about how the American mustangs have been murdered is just horrible it's unbelievable that people can be so cruel and ruthless.
God will judge those who have done such cruelty to his innocent beautiful creatures

No horse lover should miss this book

This wonderful book is unforgettable. It makes a powerful statement about the healing qualities of love and respect. I learned so much about the American Mustang and plan to join the fight to protect these magnificent creatures.

Amazing story, and great information about our native wild horses and the tortuous ways they are treated

This book was so touching and informative. The Mustangs need us, just as when need them. Whether we know it or not. Let hope this book gets into the hands of persons who are willing to chip in and contribute to our mustangs' futures.

I never write reviews but this book touched me so much, the story is so compelling & heartbreaking at the same time. I am horse person and have bought so many books to understand horses, but this book has taught me so much about their character, their nobility and remarkable spirit.
I believe horses are an incredible gift from God and have so much to teach us, if we will only listen!
I am listening now!!

More commentary about our government's horrendous treatment of wild horses than a memoir about training a wild horse, this book is mostly filler and endless repetition. The content certainly does not merit a book!

I absolutely love this audio book. It is the most interesting book I have ever read. I wish there were more books out there like this one.

A beautiful story of, patience, kindness, redemption, and love. So much to learn from this. Thank you for sharing.

Definitely has a agenda

The story is good but there’s no question that this book was written with an agenda. I’m all for learning about the plight of the Mustang, it was interesting but long chapters are dedicated to educating the reader about Mustang history, not the story.

Good story but to much opinion

Although I agree with the sentiment of the anti wild horse slaughter in this book it was over done. There was no need to mention this in every chapter and almost every paragraph. The story of Sampson was awesome and I loved that part of the book. The narration was good.