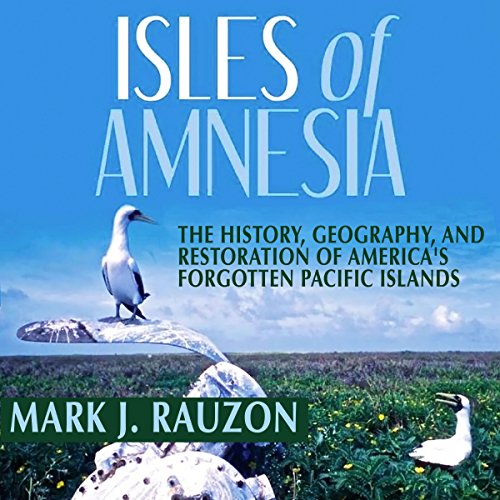 For over a quarter century, biologist Mark J. Rauzon has worked in the field of island restoration, traveling throughout the American Insular Pacific to eradicate invasive plants and animals introduced by humans. The region spans from Hawai'i to Samoa to Guam, and their neighbors - small, obscure, tropical islands that are hundreds if not thousands of nautical miles from each other. These little-known US possessions and territories include various islands and atolls: Jarvis, Howland, Baker, the Northern Marianas, Wake, Palmyra, Johnston, and Rose Atoll, among others.

In Isles of Amnesia, Rauzon chronicles the ecological and human history of these islands, enlivened with his firsthand experiences of eradication efforts to restore atoll ecosystems and maximize native biodiversity. Each chapter focuses on an individual island or island group, revealing how each location has its own particular story, secret past, or ecological lesson to be shared. Taken as a whole, the region has played a unique role in American history, with the remoteness of the islands having served the needs of whalers and guano miners in the 1800s and, in later years, that of military secret projects, missile launching, chemical weapon incinerations, and air bases. This much-needed work tells the fascinating story of America's forgotten Pacific islands.

The audiobook is published by University of Hawai'i Press.

"[Rauzon] combines a biologist's acute eye, with that of an artist." (Pamela Frierson, Environment Hawai'i)
"An interesting, thought-provoking and entertaining listen, based on many decades of experience in these unique places." ( Island Studies Journal)

What listeners say about Isles of Amnesia

If a friend did listen to it, I would let them know that ths 2016 book is broken up into eight chapters by Pacific island group:
1 Amerikan Sāmoa
2 Jarvis Island
3 Kiritimati
4 Palmyra Atoll
5 Kingman Reef to Howland and Baker Islands
6 Johnston Atoll
7 Wake Island
8 Guam and the Northern Mariana Islands
The printed and Kindle eBook versions of this book contain many maps, but unlike most audio books with significant visual content (which include such visual information as a downloadable PDF in your Audible library) this audio book fails to include any downloadable materials at all.

Would you recommend Isles of Amnesia to your friends? Why or why not?

I would not recommend this to my friends, because visualizing the various locations of the islands contained in this audio book is impossible from a verbal description and no downloadable visual content, in PDF format or otherwise, was provided by the author and/or publisher for inclusion in a customer's personal Audible library.

Who would you have cast as narrator instead of Randall R. Berner?

Someone who could refer to a PDF by reference. Note: The relatively low scores this book as earned from me are due to the neglegent performance of the author and/or publishers in not including a PDF for this geographically oriented book, not due to Randy Berner's performance as a narrator. However, if another narrator was to be used, perhaps use the narrator of Treasure Islands: Tax Havens and the Men Who Stole the World by Nicholas Shaxson.

Could you see Isles of Amnesia being made into a movie or a TV series? Who should the stars be?

It might possibly be made into a documentary, but unlike this audio book, which does not contain any accompanying visual materials, such as maps, I would hope such a documentary would visually show where the locations of the islands are actually at instead of just describing their locations verbally.

The maps and other visual data from the other versions of this book should be included as a PDF in the customer's Audible library.