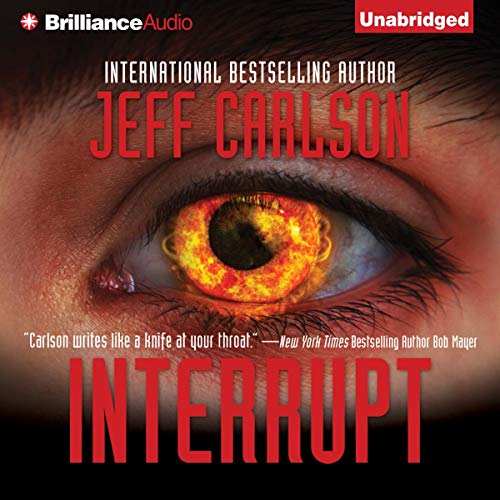 By: Jeff Carlson
Narrated by: Hunter Davis
Try for $0.00

In the distant past, the leader of a Neanderthal tribe confronts the end of his kind.

Today, a computational biologist, a Navy pilot, and an autistic boy are drawn together by the ancient mystery that gave rise to Homo sapiens.

Planes are falling from the sky. Global communications have ceased. America stands on the brink of war with China - but war is the least of humankind’s concerns. As solar storms destroy Earth’s electronics and plunge the world into another Ice Age, our civilization finds itself overrun by a powerful new species of man...

This brilliant thriller takes listeners to an all-too-plausible tomorrow that’s as scientifically rigorous as it is wildly imaginative.

What listeners say about Interrupt

I saw this book on a "Recommended Reads" list and it sounded interesting. After reading the synopsis and a few reviews I was even intrigued!

Then I listened to it.

The premise is pretty good, but it's ruined by what seems like a desire, by the author, to write a movie rather than a good novel. The characters are insanely irritating. The story lurches along like a hobbled puppy. Several times I wondered if it was a Young Adult novel trying to look big in its father's clothes. The heroine is someone you just want to dislike. The hero is flat and pretty stereotypical.

I ended up rooting for the protagonists because I just wanted the main characters to die.

I think Hunter Davis did the best he could and took the only option available...lifting the characters from Seinfeld.

It was just sad how much effort he put into polishing this turd.

So, avoid this trap. Really. It's bad.

I read the whole thing.

Some parts almost read like a romance novel, cringe, so maybe a 1+ star rating for some women, 2 star if you are 12 years-old since the work is sophomoric. Reading this book was a painful experience, so maybe 3 star if you are a masochist, which I might be since I finished the book. The pain grows worse as the book plods along. I think I finished this book to punish myself for having purchased it. I should have read the derogatory reviews more carefully, and after rereading the 5 star reviews for this book I think I will never again read or believe a 5 star review. From now on I'm going straight to the 1 and 2 star reviews before buying a book. I really don't like trashing an author. I know they work hard and have a lot riding on the success of each book, but this author should do his readers a big favor and find a productive way to spend his life. It isn't right to make your living by making others suffer. I love Sci-Fi but not fantasy. To me, good Sci-Fi must be plausible and the author should know more than I know about the science that under pins his story, which is not really that high a bar to clear. I am no Albert Einstein. Fantasy novelist don't even try to clear that bar. Their books are sheer flights of imagination, based on science that seems more like magic. That must appeal to magical thinkers, readers who's average age in 6 to12. Fantasy that thinks it is science fiction is just sad, and this book is an example. For me this book was almost unreadable. I deserve some sort of award for reading it through to the lackluster finish. This story is disjointed and it read as though it had been written by an adolescent who has just completed puberty, thinking he has great knowledge, but you don't know what you don't know, a legend in his own mind. Maybe the narrator is partly responsible, maybe not. He did not seem to make the book sound more adult but that may be the entire fault of the author. I read most of this book as an Audible recording. It might have been a better read on a Kindle. I am so happy Kindle offers refunds. This is the first book I have returned. If I could return it to Audible I would.

Another Jack Reacher novel. He is my alter ego.

Who would you have cast as narrator instead of Hunter Davis?

Disappointment and maybe a little anger at the people who wrote 5 star reviews for this book. I think they must have been paid, or maybe they are just not from around here, like in a Steven King novel, maybe another dimension.

I think I have said enough. You have been warned. I have done my duty, just like Jack Reacher. Like Reacher, this time my duty involved what some might consider murder, so I'd better stay low and keep moving. In my defense, I think my review is a mercy-killing, not a murder. Jack Reacher almost never feels bad about the people he has to hurt to do the right thing.

Jeff’s work is filled with action and causes us to ask larger questions about our own nature. Keeps you on the edge of your seat.

This book started out great but the author soon began to inject verbal dunnage in an effort to either pad his word count or impress us with his knowledge.

I was not impressed.

my brain had a1 hour timeout where it will ask me if anything was actually said over the last hour. office the answer is no, I give the book a 1 stay rating too rebound myself not to download that book again. Inc this case, it for two starts because office started out so well.