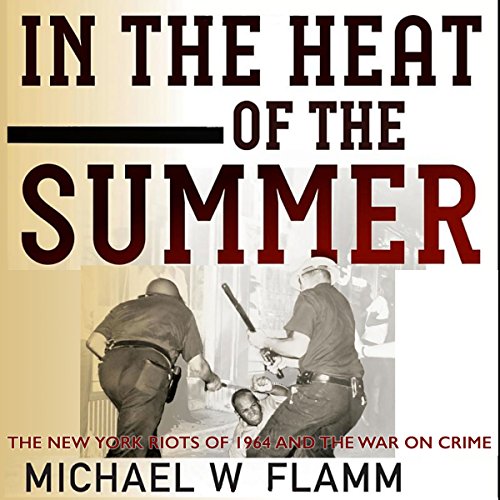 In the Heat of the Summer

On the morning of July 16, 1964, a white police officer in New York City shot and killed a black teenager, James Powell, across the street from the high school where he was attending summer classes. Two nights later, a peaceful demonstration in Central Harlem degenerated into violent protests. During the next week, thousands of rioters looted stores from Brooklyn to Rochester and pelted police with bottles and rocks. In the symbolic and historic heart of black America, the Harlem Riot of 1964, as most called it, highlighted a new dynamic in the racial politics of the nation. The first "long, hot summer" of the 60s had arrived.

In this gripping narrative of a pivotal moment, Michael W. Flamm draws on personal interviews and delves into the archives to move briskly from the streets of New York, where black activists like Bayard Rustin tried in vain to restore peace, to the corridors of the White House, where President Lyndon Johnson struggled to contain the fallout from the crisis and defeat Republican challenger Barry Goldwater, who had made "crime in the streets" a centerpiece of his campaign. In the Heat of the Summer spotlights the extraordinary drama of a single week when peaceful protests and violent unrest intersected.

"A searing account of the 1964 New York City riots...sets the stage for today's debates...." (David Farber, University of Kansas)

"The best history ever written about race and urban violence in the 1960s." (Michael Kazin, author of War Against War: The American Fight for Peace, 1914-1918)

What listeners say about In the Heat of the Summer

Absolutely remarkable how very little has changed. Catering to criminals is never a good policy that could sustain the progression of humanity..

Looking at a myriad of viewpoints, Flamm lays out the details of a horrific and pivotal era without selling one view over another. Enlightening that modern day police killings and subsequent protests and riots are exact repeats of events 50 years ago.