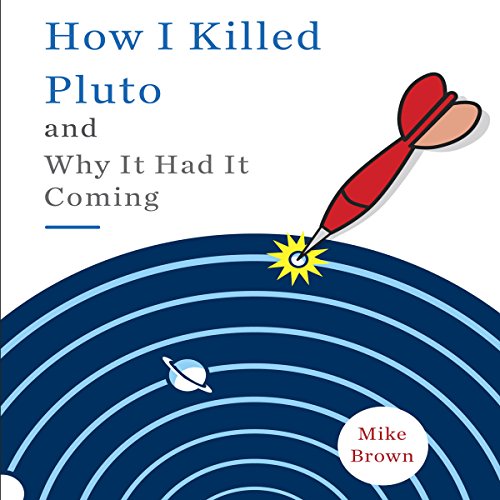 How I Killed Pluto and Why It Had It Coming

The solar system most of us grew up with included nine planets, with Mercury closest to the sun and Pluto at the outer edge. Then, in 2005, astronomer Mike Brown made the discovery of a lifetime: a 10th planet, Eris, slightly bigger than Pluto. But instead of its resulting in one more planet being added to our solar system, Brown's find ignited a firestorm of controversy that riled the usually sedate world of astronomy and launched him into the public eye. The debate culminated in the demotion of Pluto from real planet to the newly coined category of "dwarf" planet. Suddenly Brown was receiving hate mail from schoolchildren and being bombarded by TV reporters - all because of the discovery he had spent years searching for and a lifetime dreaming about.

"Finally I have someone to whom I can forward the hate mail I get from schoolchildren. After all these years, the real destroyer of Pluto has confessed. Part memoir and part planetary saga, How I Killed Pluto invites you into planetary scientist Mike Brown's office, his home, and his head as he tells the story of how his research on the outer solar system led directly to the death of Pluto, the planet." (Neil deGrasse Tyson, Frederick P. Rose Director of the Hayden Planetarium and author of The Pluto Files: The Rise and Fall of America's Favorite Planet)
“Romance, intrigue, laughter, skullduggery, and most of all: science! Mike Brown has done more than anyone to reshape our view of the solar system, and this first-person account of his discoveries is an irresistible page-turner. You’ll have so much fun, you won’t even notice how much you’re learning.” (Sean Carroll, author of From Eternity to Here: The Quest for the Ultimate Theory of Time)
“Science is at its best when it shakes up our thinking, and when it comes to planets, Mike Brown has grabbed on with both hands. Whether you think Pluto is a planet or just another ice ball, you’ll find Brown’s tale of exploring the outer solar system a charming and even endearing read. If Pluto is indeed dead, then its sacrifice was not in vain.” (Philip Plait, author of Death from the Skies!)

When I bought this book it was a bit of an experiment. I enjoyed all the 'fuss' when Pluto was demoted from planetary status, but I wasn't sure an entire book about it would be interesting. It is. Very. Ryan Gesell does a top notch job of narration, and Brown's weaving in and out of his work and home experiences (how he meets and falls in love with his wife, and the birth of their first child) seems to keep it all in perspective. The universe goes on in both the grandest and most humble of ways. There are even some villains thrown into the mix. If you're at all interested in astronomy, or just the excitement of discovery, this is a must listen. Five Stars.
Rick

This book is about the death of a planet, and the birth of a family. I loved the way Brown juxtaposed his explorations of the universe with his own personal experiences building his family. It works. We see Brown the brilliant astronomer, and Brown the doting husband and father. We also see how those two roles sometimes conflicted, like when the early arrival of his beloved daughter almost jeopardized his planet discoveries.

Great, although enough about the sprog

This is an extremely engaging and entertaining listen. It shouldn't be, since Mike Brown's career revolves around spotting tiny little moving dots among seas of other dots. Yes, those little dots are worlds, but we'll probably never see them as anything other than dots in our lifetimes. Against the odds, Brown's narrative successfully communicates the excitement of discovery. He also explains in a clear and articulate way why Pluto shouldn't be called a planet - and more importantly he makes you care!

My only gripe is that there's too much stuff about the author becoming a father. At first it seems fine, as he makes childbirth feel thematically coherent with the discovery of new worlds. But after an entire chapters was devoted to him goobering about his kid, I started to feel like I was being talked at by one of those parents who backs you into a corner at parties and drones about their kid's school grades. Enough! Thankfully, he recovers his sanity toward the end and remembers that he's writing a book about planets.


The reader is pitch perfect.

Astronomy 101 + Stories about My Daughter

Perhaps not enough for a book here- I think I may have been more satisfied had it been reduced to Magazine Cover Story size. The Title of the book "gives away" the final decision related to the book's ultimate debate, and exemplifies the authors humorous writing style. I liked the "Astonomy 101" lessons that I took from the book, but grew annoyed at the excessive descriptions of the authors new-born daughter. (We ALL know that OUR kids are wonderful/funny/intelligent- I'd rather waste hours hearing about YOURS!)

Interesting story about how Pluto was downgraded to an asteroid from a planet and the 3rd grade hate mail that followed. Well written and narrated.

How I Killed Pluto and Why It Had It Coming, is far more interesting and entertaining than I originally envisioned. I just thought I would learn something about astronomy and I got far more than I bargained for. This is really a memoir in which Mike Brown, CalTech astronomer, tells about his dissertation, his research, astronomy in our solar system and even more. The writing is strong and not scientific. It is easily accessed by all readers. Along the way, Brown reveals how his research sent him a wife, the birth of his daughter in the midst of astounding discoveries, and how Pluto was dropped as a planet. If you are looking solely for a scientific treatment of the demise of Pluto, per se, this is not it. If you want to be informed about the science and politics that lead to that decision, you will find it here. The reading of Ryan Gesell is excellent.

Who would have thought an astronomer's memoir would be so engaging? The passion that fueled the drudgery of sifting through huge amounts of data and systematically searching infinity is a tough sell, but the author manages it deftly with a humour and affability that forgives the frequent detours where he stops to marvels at the more terrestrial delights of love and fatherhood. Definitely a worthwhile listen, and it's always nice to have a reminder to look up from time to time to contemplate the heavens.

Not enough science/history; too much ego

Purchased this to listen on my drive to the Lowell Observatory in Flagstaff AZ where Pluto was discovered by Clyde Tombaugh. The author tried to weave a narrative about his career in astronomy with the story of his personal life which in and of itself is fine. However, it is done so poorly that it bogs down the whole book. There is way too much of his personal life in this book and he’s really a pretty dull person. He reminds me of that kind of person who is so egotistical that they don’t realize that just because something happens to them, it doesn’t necessarily make it interesting to anyone else. You know the kind of person I’m talking about? The kind of person who thinks reciting last night’s grocery store list is acceptable small talk? Listening to the mundane details of his personal life was infuriating. I mean, he says he can’t remember anything from entire press conferences but he sure as @&#% remembers every damn cup of coffee he drank over the years and needs to tell us about each and every one of them for some reason. Another huge problem is that as the book progresses, his personality really emerges and it is problematic. The last 45 minutes I’ve listened to has been him publicly mocking the decisions of an organization of astronomers that he can’t be bothered to even try to join. I can’t root for him anymore because he seems like a jerk. I even think his wife seems like an unpleasant sourpuss. I wish I had bought any of the other books about Pluto instead of this one. I probably will just to cleanse my palate after I’m done with this stinker. So, I feel better now that I’ve posted this rant/review and I’m going to power through the last 30 minutes of this dumb book. My advice: consider a different book about Pluto if you enjoy science. Also, check out the Lowell Observatory in Flagstaff AZ! I saw the actual telescope that was used to capture Pluto in the 1930’s! It was awesome! Viva Pluto!

A fantastic story that's unnecessarily verbose, the family tangent ruins the cadence and distracts from the plot.

This has got to be one of my absolute favorite books on Audible. Whether you're an astronomy geek or not, do yourself a favor and get this book! Brown tells an incredibly human story of how he came to be a planet hunter, and how it affected his life. He talks about his obsession not only with science, but also about family-- as he talks in detail about trying to balance his work with his daughter's birth. Even better, he gives his side of the story of how one of his greatest discoveries was almost stolen from him, and how the dirty deed was discovered. This is a book with something for everyone, and the reader does a fantastic job of bringing some of the authentic voice of the author to his performance. Do yourself a favor and dive in!