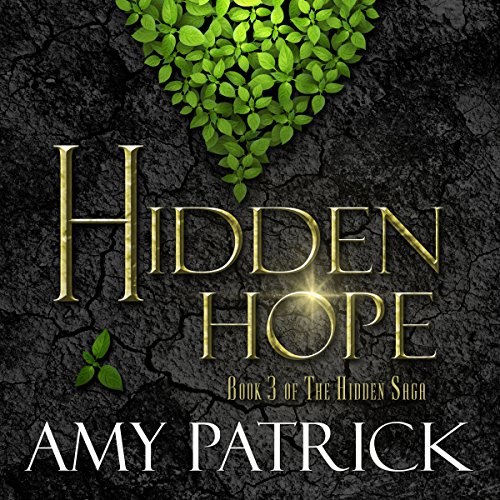 Book 3 of the epic series that's earned more than 3,000 worldwide five-star reviews and has sold thousands of copies! Give in to glamour and continue the thrilling and deeply romantic journey into the Hidden world that readers are calling “addictive”, “riveting”, “magical”, and "captivating from the first chapter.”

Ryann is torn between two kings - two brothers. Lad, the king of the Light Court, is her first love. Nox, the new king of the Dark Court, came through when she needed him most and won her heart. But Lad has revealed a secret to Ryann that devastates her and tears at her loyalties. And though Nox and Lad are fierce rivals for the girl they both love, an even bigger problem threatens them all.

The unsuspecting human population of the world hangs in the balance with an approaching war between Dark and Light. Powerful fan pods have transformed the face of the country. The Dark Council's plan is almost accomplished, and the Dark Court is nearly ready to reveal itself and take back control of the world, as it was in the old days, before the history books were written. Ryann can't believe the Nox she knows and loves would allow that to happen, though he is now deeply entrenched in the Dark Court and seems to be changing by the day.

Is his love for Ryann strong enough to give him the strength to stand against his people and their plot? Or should she side with Lad and the Light Court, who who appear to have the welfare of humans in mind? Lad is fighting the looming danger as hard as he can, fully involved now in the world of Elven politics he tried so hard to avoid.

And what can Ryann - only a partial Fae - personally do? She'll have to learn to balance her own Dark and Light sides - and somehow make the right choice between two tempting Fae guys - or face the consequences of a wrong decision eternally and watch her family and the entire human world fall under the oppression of the Dark Court.

What listeners say about Hidden Hope

This series is so great! I loved this book so much. The ending was what I was hoping for. I am going to dive right into the next book. Also, the author does such a great job narrating!!!

what happened first two were awesome

Heart of the trilogy

This one had me on the edge of my seat the entire time. Ryann, who was with Nox in the 2nd book, was still trying to understand the elven way and how much she had inside her. She discovers who her biological father is and he is not a good guy. She struggles with her heart between Nox and Lad but also her mother and father. I am so happy how it all turned out. It appears the immediate danger has been eliminated but dark forces could bring it all crashing down.

I’ve throughly enjoyed reading this saga. I can’t wait to hear what is in store for them all.

Hi, if you have not read this series, please note there will be spoilers for book 1 and 2 in this review.

Wow. So book 2 was great I was heart broken when Lad left Ryan even though it was clear he didn’t want to. I was annoyed she could see it. Then Knox grew on me although I did not like that darkness he sometimes showed. I just love this love triangle! Book 3 made everything fall into place. This series is just a feel good fun fantasy series. Yes it’s young feeling but who doesn’t love young love! I can’t wait to hear what happens next with my favorite elves.

It’s worth the credit, trust me.

Okay my heart is still trying to recover from all the different directions it got pulled in. I wasn't completely sure who Ryann would end up picking and I am happy with her choice even if there was a lot of who will it be? I really liked the way this tied up a bunch of threads and yet am sad to have to say goodbye to these characters. This was a such a good final book I wish there was more. This one starts a month after the last book ended and it kept my attention from the moment it started. I did not want to pause this or stop listening till the end. I loved every second of this book and hope the author writes more in this world. I don't want to say too much and spoil anything.

Loved it! Each one draws you in a little of more! When will the young lovers find peace! Narrator was great!

Great conclusion, with hints for a spin-off series

Rian’s story arc finds a satisfying conclusion in Hidden Hope, but all is not completely fine in the Elven Kingdoms, leaving the door wide open for spin-off books. I once again enjoyed DeLuca’s narration of the Main character. She was very convincing as Rian learned more about the differences between her relationships with both Knox and Lad. Secrets are revealed, new friendships are kindled, and loyalties are tested as Rian races to save humanity from Elven domination.

Who can resist the pull of light and dark?

My favorite part of this book (as well as the two prior books in the series) have been the world building; its both original and unique.

The plot balances this sweet but conflicting aspect, and the love triangle at the heart of the story pulls you in for different reasons.

I recommend this series on Audible as its both well narrated and entertaining.

Can Ryann stop the Dark Elves?

Ryann is torn between Nox the King of the dark Court who was there for her when she needed help and Lad the king of the Light court who's she fell in love with first.
But her feelings take a back seat when she finds out the corrupt dark council wants to rule over the humans using glamour through TV programmes and the celebrities with their fan pods. Can Nox defeat his council before the senator Davis tries to kill him to become king once again, with the help of Ryann and his brother Lad and his fiancé Vancia. And will Ryann realise who is the man for her.
A really great 3rd installment of this series. As I've said before the voices are spot on and you feel like you're in the story. I received a free audible copy of this book from the author but the opinions expressed in this review are my own.

I received a free audio copy of this book directly from the author for an honest review.

I wish I hadn’t read a spoiler by accident! This was definitely an awesome continuation of a well written and fast paced story. What I read in the spoiler made me think I was going to be majorly disappointed in the book but actually it turned out I was wrong ok maybe it’s still not 100% the way I’d want it but hell what book is? To make it that way and still be happy with the ending that’s a pretty impressive thing in my opinion.