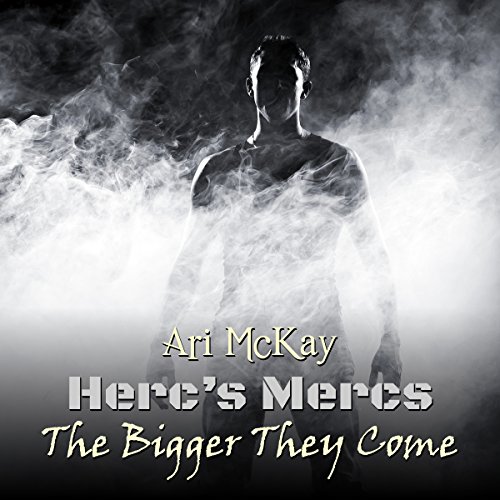 Cade "Hercules" Thornton is an ex-marine and soldier of fortune; now he's the owner of Hercules Security, which provides the best bodyguards in the business. Since his leg was crushed and reconstructed, Cade doesn't do field work anymore - until a challenge is issued to him by wealthy Kate Morgan, who wants her bookish grandson protected from a stalker. She insists on having the very best bodyguard available, and that is Cade himself.

But there is nothing laid back or bookish about Dr. Jude Morgan. Having lived under the thumb of his grandmother his entire life, Jude is insistent that he doesn't need a babysitter. Sparks fly when Cade tries to insinuate himself into Jude's life, and Cade knocks Jude on his ass - literally.

Yet the danger to Jude is real, and Cade is the only thing standing between him and an increasingly more terrifying stalker. Cade's protective feelings for his client become something more while Jude begins to realize that his brawny, neo-Viking protector is a man unlike anyone he's ever known. Yet as Cade and Jude grow closer, so does the danger.

Cade will stop at nothing to protect Jude, but Jude's stalker is determined to get his man - even if he has to kill Cade Thornton to do it.

What listeners say about Herc's Mercs

I really liked the narrator on this book. Will look for more books by JP Handler. The story length was right up my alley too. However I disliked one of the two main characters. Had to force myself to finish book. I am not o a fan when a main character is a temper tantrum throwing brat. It was so bad at the beginning of book I had to stop listening 3 times and take a break. Then near the end of the book second to lädt chapter he got better and I sighed in relief. Short lived. Final chapter in book he again was a childish brat. I will probably go ahead and listen to more of the series hopefully not each book has a character like this. Some people may not mind a bratty main character. It is just not one of my favorite things to read about.

I really disliked the narrator. It took away from the story too much. It should be re-released using Tristan James.

Dreadfully lame story with an even worse narration. No, the narration is the worst bit.Bad, bad, just really bad. Awful.

Would you try another book written by Ari McKay or narrated by JP Handler?

Definitely not by the narrator, have listened to 100's of audiobooks over the years and this is by far the worst narration I've ever come across. Although the story was certainly poor, to some degree the narration made it hard to judge as there is a chance it could have been brought to life by someone better.

Would you ever listen to anything by Ari McKay again?

I would hesitate to. The story was incredibly weak, I don't mind a little of the usual tropes but there is absolutely no arc whatsoever, no real plot to speak of and so no pay off at the end. Bodyguard books in this genre are usually somewhat predictable in nature and that's absolutely fine but I still expect the author to make *some* kind of effort in constructing a story!

There are no words to describe how bad the narration is. It sounds like a computer generated voice is reading the book - the pacing is off, the emphasis and inflections on words are completely wrong and it is void of any emotion. Truly, truly awful.

What character would you cut from Herc's Mercs?

There aren't that many characters but, to be brutally honest, they are all so one dimensional and the plot is so non-existant, I don't think it would matter!

Avoid at all costs, save your money or credit for something better and more deserving.