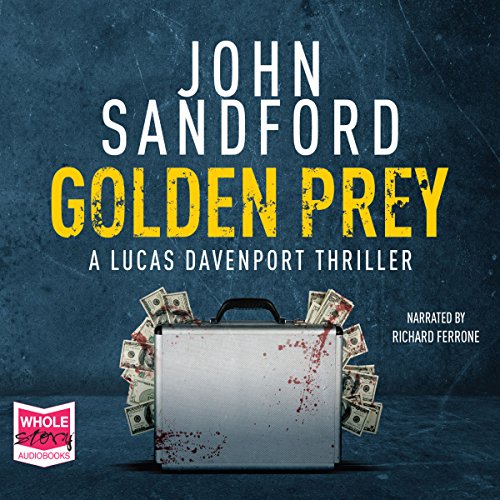 By: John Sandford
Narrated by: Richard Ferrone
Try for $0.00

A drug-cartel counting house gets robbed in Biloxi, Mississippi, and suitcases full of cash disappear, leaving behind five bodies, including that of a six-year-old girl.

Davenport takes the case, which quickly spirals out of control, as cartel assassins compete with Davenport to find the Dixie Hicks shooters who knocked over the counting house.

Things get ugly real fast, and neither the cartel killers nor the holdup men give a damn about whose lives Davenport might have saved; to them, he's just another large target.

What listeners say about Golden Prey

Least Favourite Of The Series

Meh. I like the Davenport novels, but this isn't one of the good ones.

As many have pointed out, it's pure chase--nobody has to do any serious detecting or thinking. In addition, it's got the techno find because the GPS function on cell phones pretty much keeps the bad guys in Davenport's sight. The other cops that Davenport teams up with are pretty flat and wooden.

And Sandford's sense of place and the site of the big shootout is confusing at best. I defy anyone to visualize or draw me a map of where the shootout takes place or what the arrangement of buildings there actually look like. Sandford must be working from a map or a set of photos, but he certainly can't relate those to us in any helpful way. The layout of the shootout is the real mystery here, and it's annoying as hell.

Finally, the plot device where Davenport calls his contact in the Marshall's Service whenever he needs to find out where the bad guys are seems like a cop-out (pun intended). I think Sandford has written much better books than this. I got so bored with the chase thing I opted out with an 1.30 hours to go.

Richard Ferrone was excellent with the delivery of the story

Just what you want from a Prey thriller.
Action from the get go. Davenport at his best.

Character rich, Funny, gritty, thrilling & engaging..if I think about it, "Sandford" should actually be a verb..

thrill ing must read, with Lucas in his new role . has the freedom to chase some "very nasties"

Not as good as Sandfords other books. I'm working my way through the Prey series.
I don't know why the author made the criminals likeable but it was a little off-putting.
The new sidekicks are not as good as the old ones.
The final chapter is pure cringe. Like a little kid telling his bully that he would get his dad to beat him up.

John Sanford never fails to produce a well constructed story where the conclusion is not always predictable. Beautifully narrated.