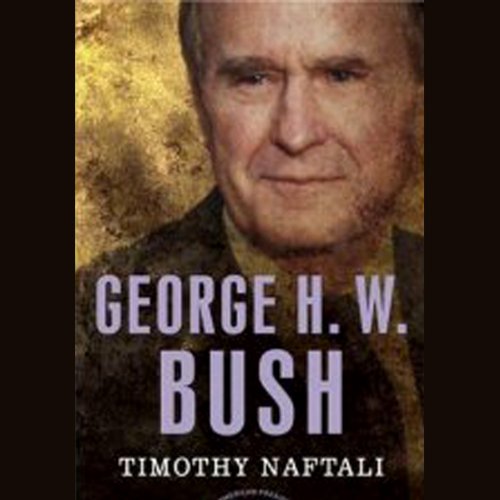 By: Timothy Naftali
Narrated by: Patrick Frederic
Try for $0.00

George Bush was an uncomfortable leader, a distant patrician figure who spoke awkwardly and was long thought to lack "the vision thing". And yet, as Timothy Naftali argues, there was no person of his generation better prepared for the challenges facing the United States as the Cold War ended. Bush brilliantly shepherded Russian reformers through the liberalization of their socialist system and skillfully orchestrated the reunification of Germany. And following the Iraqi invasion of Kuwait in 1990, he united the global community to defeat and punish Saddam Hussein. Domestically, Bush reasserted principles of fiscal discipline and political accountability.

Yet it was ultimately his trademark propriety that cost Bush his chance at a second term. Bush's landmark budget deal was characterized as a political defeat rather than a show of fiscal responsibility; his caution in dealing with Saddam Hussein was considered by many Republicans a pathetic compromise. With his party divided, Bush lost his bid for reelection in 1992, but in a final irony, the conservatives who scorned him would return to power eight years later, under his son and namesake.

George H. W. Bush wrote no memoir about his life or presidency. This biography is part of The American Presidents Series. Bush had been Reagan’s Vice President. In modern times very few V. P.’s have been successful in being elected president. Bush inherited a recession, budget deficit, the savings and loan debacle. He had to deal with Noriega and Sadden Hussein’s invasion of Kuwait. The author proposed that Bush did an excellent job in dealing with the unraveling of the Soviet Bloc.

The book is well written and researched. Apparently, Bush kept a diary and the author had access to this. The book is concise and easy to read. Naftal packed a lot of information into the biography. This is an excellent book for those wanting a good review of Bush’s presidency. At the end of the Audiobook is an interview with the author.

The book is just over seven hours. Patrick Frederic does a good job narrating the book. Frederic is a stage and film actor. He also narrates audiobooks.

This is a reasonably well written short biography of Bush 41 which is consistent with the approach of the other biographies in the Schlesinger series of which it is a part. But it is a political book, so politics cannot be ignored in this review. Although the author is obviously a liberal Democrat, for the most part he attempts to be fair to Bush personally. However, listeners should be forwarned that the entire book is written from a liberal point of view. Thus, for example, the"bad" Bush is the Bush of the "read my lips no new taxes" pledge and the "good" Bush is the Bush who broke that pledge. There are also many gratuitous slaps at Ronald Reagan. Thus, the book in some ways reads like an "analysis" one might read in the NY Times. Accordingly, liberals will have a more positive response than conservatives.