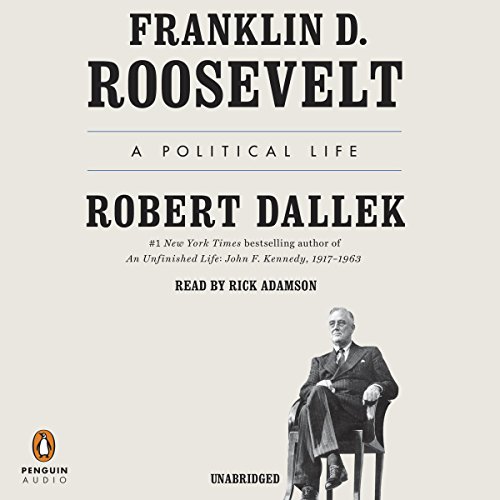 By: Robert Dallek
Narrated by: Rick Adamson
Try for $0.00

A one-volume biography of Roosevelt by the number one New York Times best-selling biographer of JFK, focusing on his career as an incomparable politician, uniter, and deal maker

In an era of such great national divisiveness, there could be no more timely biography of one of our greatest presidents than one that focuses on his unparalleled political ability as a uniter and consensus maker. Robert Dallek's Franklin D. Roosevelt: A Political Life takes a fresh look at the many compelling questions that have attracted all his biographers: How did a man who came from so privileged a background become the greatest presidential champion of the country's needy? How did someone who never won recognition for his intellect foster revolutionary changes in the country's economic and social institutions? How did Roosevelt work such a profound change in the country's foreign relations?

For FDR, politics was a far more interesting and fulfilling pursuit than the management of family fortunes or the indulgence of personal pleasure, and by the time he became president, he had commanded the love and affection of millions of people. While all Roosevelt's biographers agree that the onset of polio at the age of 39 endowed him with a much greater sense of humanity, Dallek sees the affliction as an insufficient explanation for his transformation into a masterful politician who would win an unprecedented four presidential terms, initiate landmark reforms that changed the American industrial system, and transform an isolationist country into an international superpower.

Dallek attributes FDR's success to two remarkable political insights. First, unlike any other president, he understood that effectiveness in the American political system depended on building a national consensus and commanding stable long-term popular support. Second, he made the presidency the central, most influential institution in modern America's political system. In addressing the country's international and domestic problems, Roosevelt recognized the vital importance of remaining closely attentive to the full range of public sentiment around policy-making decisions - perhaps FDR's most enduring lesson in effective leadership.

“Meticulously researched and authoritative.... Adequate single-volume biographies about FDR abound. But none are as heroically objective and wide-angled as this fine Dallek effort.... By tapping into the vast correspondence between Churchill and Roosevelt, Dallek discerns a more strained relationship between the leaders than presupposed.... Luckily for us, Roosevelt is with us again in Dallek’s outstanding cradle-to-grave study.” (Douglas Brinkley, The Washington Post)

“[Dallek] believes that FDR was a born politician of ferocious and very nearly infallible instincts, and through a combination of extensive research and first-rate storyteller’s gifts, he makes the reader believe it, too. His Roosevelt is a man of great but always complicated drives, a worrier and second-guesser who nonetheless often believed the intensely stirring things he so often said and wrote.... Dallek relates in fine and compelling detail all the thorniest scandals of the FDR years.... But far more prominent than scandal in these pages - and far more welcome - are Dallek’s frequent examinations of the now-forgotten political opposition FDR faced at every stage of his long tenure as president.... We see FDR afresh, which is an amazing feat in its own right.” (Steve Donoghue, Christian Science Monitor)

“An insightful, incisive and intelligent one-volume work of biography and history - and a pointed primer on how things in Washington get done. In a period defined by division, gridlock and tweet storms, Dallek crafts a pointillist portrait of the four-term president, who knew almost intuitively how to use the power of his office and how to reach consensus.” (Peter M. Gianotti, Newsday)

Not bad, but has errors in the side stories used to flesh out story.
Most likely a research assistant errors not caught by the author.

Example: Authors states Lindbergh crossed the Atlantic in 1925, it was 1927.
Authors says that all the Doolittle raiders shot down in China died in captivity. 4 survived at POW's thru the war.
These only 2 of 5 caught reading the book. These are &quot;side&quot; story that don't impact the FDR story line, But I would expect an author of this caliber not to make these errors.

A good view of FDR as a political person

Having not read any of the biographies of FDR, D K Goodwin et al, I.have a limited view, but one supplemented by several more focused accounts, WWII management, the depression mostly critical accounts. In sum FDR really does come off as the third great president.

With the many books written on Roosevelt I feel that this one most likely didn't need to be written. Rather than display the facts and give you a full presentation of Roosevelt's life I feel like the author was a Roosevelt fan boy who wanted to display a full picture but thought that Roosevelt could do no wrong and was justified in some of his shady dealings.

hagiographical account of FDR is peace and in war

Dallek cannot deny that FDR did all he could to manipulate events to get the US into the war, that he did too little to get Great Britain to give up her colonies, and how the depression dragged on throughout the 30s. Yet he praises Roosevelt whenever and however he can. Google the "Greer sinking" for a taste of what he missed.