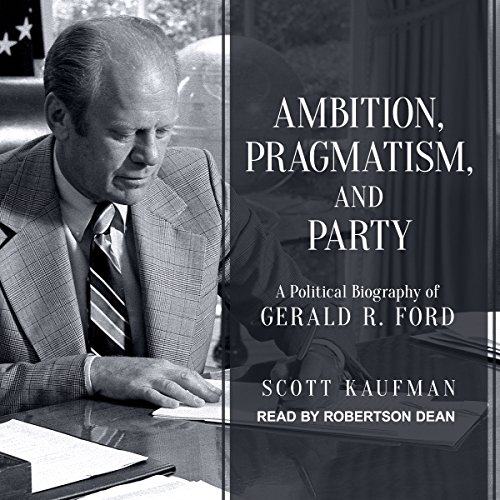 By: Scott Kaufman
Narrated by: Robertson Dean
Try for $0.00

Within eight turbulent months in 1974 Gerald Ford went from the United States House of Representatives, where he was the minority leader, to the White House as the country's first and only unelected president. His unprecedented rise to power, after Richard Nixon's equally unprecedented fall, has garnered the lion's share of scholarly attention devoted to America's 38th president. But Gerald Ford's (1913-2006) life and career in and out of Washington spanned nearly the entire 20th century.

Ambition, Pragmatism, and Party captures for the first time the full scope of Ford's long and remarkable political life. The man who emerges is keenly ambitious, determined to climb the political ladder in Washington, and loyal to his party but not a political ideologue.

Drawing on interviews with family and congressional and administrative officials, presidential historian Scott Kaufman traces Ford's path from a Depression-era childhood through service in World War II to entry into Congress shortly after the Cold War began. He delves deeply into the workings of Congress and legislative-executive relations, offering insight into Ford's role as the House minority leader in a time of conservative insurgency in the Republican Party.

What listeners say about Ambition, Pragmatism, and Party

I selected this book because I have an (admittedly weird) interest in the minor US Presidents- the ones who tend to either be a bit forgotten or considered outright failures. Gerald Ford certainly fits the bill and I honestly knew almost nothing about him.

What a truly rewarding listen this turned out to be. Kaufman provides the deepest of dives into the political career of Ford, providing sometimes too much detail, but if you’re a history buff, it’s pretty enthralling.
At the end of the book, I’m not left with the impression that Ford is at all underrated. His presidency seems truly inconsequential at best and his almost blind partisanship mirrors much of what we still see in modern politicians. However, his post-Presidency evolution is fascinating. Even more intriguing are the tidbits provided about Betty, who I found even more complex and interesting than I found President Ford.
Rather than continue to ramble on with my thoughts about this book, I’ll simply say it is outstanding. Possibly among the 5 best presidential biographies I’ve ever read. If history and/or biography is your kind of thing- I highly recommend this book.

This is a well written and meticulously researched biography of Gerald Ford. Kaufman provides a balanced and insightful review of Ford’s political life; his personal life is lightly covered.

Kaufman claims three traits emerge in Ford’s life: his ambition, his loyalty to the Republican Party and his political pragmatism. Kaufman covers his naval career, his congressional career and his term as president. To me Ford and Carter were excellent presidents to heal the nation from the turbulent period of Richard Nixon’s presidency. Ford’s key points where he did not lie to the country and he appeared calm and dependable. I recently read another book on Ford by Donald Rumsfeld called “When the Center Held: Gerald Ford and the Rescue of the American Presidency”. That book covered only the presidency. If you are looking for more information, this book is the better choice.

The book is sixteen hours and twenty-two minutes. Robertson Dean does an excellent job narrating the book. Dean is an actor and voice artist. He has won eight EarPhone Awards, been nominated for several Audie Award and was Audiofile Magazine Best voice of 2010.

Overall, a very thorough book. The author is especially thorough on the legislative aspects at Ford's history and work. He also takes Ford to task for being a much less than perfect husband and father. Sometimes the story jumps around and ideas are repeated, but still a very good book

I was predisposed to like the book since I liked Ford. For me, however, the book ended up a “C” rather than a “B” or higher. It is a little passionless, a little antiseptic — not enough of a feeling for the man as opposed to a mere recitation of some events. I was surprised that there was no discussion of the Fortas incident, although perhaps I slept through that part. I liked the book, sort of, but did not come away thinking that the author was a scholar nor anything more than a middling writer. This is a worthy read if one likes political biography and has nothing more impressive awaiting him.

This is clearly very well-researched. It discusses not just who Ford was as a politician, but as a person, and at times, why he was that way. Something about Robertson Dean’s voice makes it easy to zone out and miss things, which is why I gave it four stars, but it’s great regardless.

The book presents a fairly balanced portrait of Gerald Ford. While his tenure as President was very short, he provided much-needed leadership to heal the deep divisions in the country left by Watergate and the Vietnam War.

An enjoyable and informative book on President Ford

This book, “Ambition, Pragmatism, and Party” was especially interesting to me because I was a young and ambitious person in the time of the Ford presidency. I remember when President Nixon resigned and President Ford was appointed to take his place. That’s why many of the aspects of his life in the book are especially intriguing. You will truly enjoy this book and listening to the story of President Ford. He was a good man and did his best to take care of a country that was torn because of the scandal of Watergate.

not a bad book on our only unelected president. lot of info on his life and presidency

In my quest to listen to an autobiography from each President from my lifetime, I had to settle for a biography with President Ford. I believe this was the most unbiased and informative one I could have chosen.
Of the president’s in my list, Ford is the one I knew the least about. I had virtually no opinion of him. That seems to be his curse. As the only unelected President, I don’t believe he was ever taken seriously. That’s unfortunate. He may have been the most equipped for the job. I believe he was an honest man who truly wanted the best for his country and though his pardon of Nixon was controversial at the time, most of his critics eventually came around to say much later that it was exactly what the country needed to move on. His “accidental” presidency turned out to be fortuitous for the nation. He was the right man at the right time.
This book informed me about many historical events that informed present day problems too. Ford’s career spanned such a long range of time that the book covered many issues I only knew a fraction about before reading this.
It also changed some of my feelings about Ronald Reagan as I had no knowledge of the campaigns he ran for president in the seventies before he ran his successful campaign that put him in the White House.
Overall the book was very helpful. Not always the most interesting but absolutely informative.