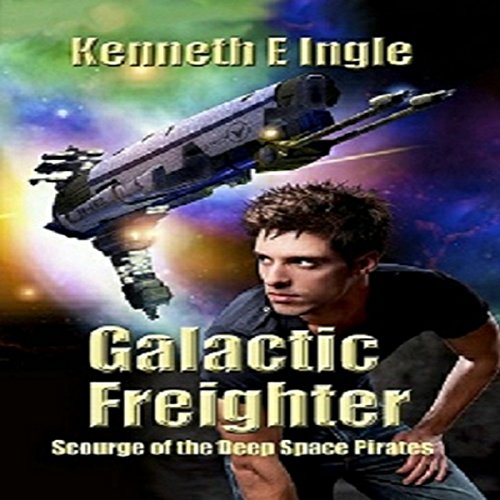 By: Kenneth E. Ingle
Narrated by: Joe Farinacci
Try for $0.00

Spacer Buck Fryman emerges from the local lockup with a dream and a plan. He'll go into business himself, as a space freighter. He'll take the dangerous routes, sail fast without waiting for the convoys normally needed for pirate protection, and if a pirate does decide to take him on, he'll prove that he's not just a barroom brawler, he can defend himself in space as well.

A few years later, his fleet growing and his wealth enhanced by the many pirate ships he's captured, Buck is summoned before the emperor. While Buck's exploits have cut into some local piracy, the pirates are increasingly organized and effective. The emperor wants Buck to take charge of the anti-piracy efforts and even Buck doesn't dare say no to the emperor.

Handling the occasional pirate raid is one thing. Going after the source of the piracy is something else. Even with the empire's navy backing him up, Buck finds his hands full with Jarred Mahoney, former imperial intelligence minister and former leader of two worlds determined to use the pirates as his wedge to overthrow the empire and make himself emperor. Mahoney will stop at nothing, from loosing pirates on innocent freighters to bringing aliens back into conflict with humanity for the first time since the days of Contact.

Author Kenneth E. Ingle continues his exploration of the Contact universe with an exciting space adventure. Buck Fryman is a larger-than-life hero, applying his combination of finesse and brute force against a universe where he seems always outnumbered but never outsmarted.

What listeners say about Galactic Freighter

I debated how to rate this book, and decided just to give it three stars. It really wasn't a bad book, but I'm torn about whether my credit could have been spent better...

The storyline follows a man who is released from prison and purchases a freighter which he arms for defense against pirates. As the story progresses, he becomes feared by the pirates and well known for his accomplishments. The Emperor of his star nation asks him to lead the fight against the pirates since he has more experience with them than the military has, and they can too easily detect and avoid military ships. He is given nearly unlimited resources in which to do this. Throughout the book, he becomes one of the Empires most brilliant tactical minds, marries into the Imperial family, finds long lost knowledge, fights space battles, makes new scientific discoveries, gets kidnapped, takes over a planet, and on, and on...

First off, I'm not too sure about that narrator. Unlike a few others, I didn't think it was horrible, it just wasn't "good" compared to some of the narrators you will find. I did find him annoying at some points, which draws you out of the story and makes you want to stop listening.

As I said, it really wasn't all that bad, but the way the story was told leaves so much more to be desired... It seems almost like this book was written as a bunch of mini stories or novellas that someone combined to make one book. The whole book doesn't flow like one cohesive story. Each sub-plot or story has its own beginning, middle, and end. I actually found this flow irritating enough that I stopped listening for a few days until my frustration subsided. It would have been a much better book if it wasn't fractured into separate yet somewhat connected stories.

Overall, if it sounds like a really great book to you, then have at it. As frustrating as it was sometimes, it actually wasn't bad. BUT, as I said in the beginning, be sure that your credit isn't better spent elsewhere first. I wish I'd put this in my list of low priority wish list to eventually listen to, but not right away.

If it weren't for the narration!!!

The only other reviewer (to this point) appeared to comment primarily on chapter transitions and the narrator; being overly harsh in their criticism and doing a significant disservice to the author. Many of the points made in that review were valid - though nowhere near "earth shattering" - and it bothered me greatly that the review contained nothing about the novel itself, author's universe construction and the story.
Yes, several segues between chapters did seem somewhat rushed. On the one hand those chapters could be viewed as "stories within a story" and contributing to the whole. On the other hand, a few of those rather abrupt transitions simply jumped over intervening years - I can forgive that sort of quick shift much easier than a contrived shipboard story or subplot that started and went nowhere. I am certainly not saying the author made the best of choices in smoothing over those transitions but it was better than trudging through pages of fluff 'n stuff.
Ok, done disparaging the previous reviewer. :-)
A VERY big positive from my perspective: there were NO descriptions of sex.. There was one (and as I recall only one) "intimate" scene which was handled delicately and without describing the act itself. Throughout the novel there was no bed hopping or gratuitous sex used as a plot mechanism.
On the critical side, I frequently found myself wishing for more (or better) character development. At least the characters' personalities, once fleshed out, remained consistent, interpersonal relationships, social and familial development progressed predictably (with respect to the passage of time).
Another positive: the science and technology were eminently believable. Ships could exceed the speed of light, but the rest of Einstein's universe and laws seemed to still be in effect. Ships had to plod along until superluminal generators (or whatever they were) were engaged, combat was fought at sub-light speeds with understandable weapons. inertia could be dampened but not avoided, etc.
The previous reviewer did get one thing right: the narrator left a great deal to be desired. Personally, I thought the book, plot, action and characters made the narration bearable, but only just. Even when totally "into" the book I found myself drawn back out of the novel because of abominable pronunciation, inflection and/or emphasis.
All in all, I think the narrator took too much away from an otherwise decent novel to give it a better overall rating. I would recommend the the audible version only when nothing else was available and even then with a caveat about the narrator. Otherwise, I could only consider recommending the paperback or kindle versions.

Seamed to be condensed and rushed

Would you try another book from Kenneth E. Ingle and/or Joe Farinacci?

Would you be willing to try another book from Kenneth E. Ingle? Why or why not?

The book seamed to be very compressed almost like the chapters are out lines for the story. The chapters all have a fast pace and give the high points to move the story along, but there wasn't much meat on the bone. that said the story was ok and I liked the characters for the most part but again they are very thin even the main character seamed to lack depth.

Would you be willing to try another one of Joe Farinacci’s performances?

The reader for this book I did not like at all he seamed to be rushing to finish from the start. His pace was fast and I couldn't even tell you after listening to the hole book if he had different voices for characters it all just turned to a high speed drone.

What would have made Galactic Freighter better?

would have been better if it had a good story line

Kenneth E.Ingle must be a 15 year old . This was one of the worst books ever

he needs to find work doing anything else!!!

a root canal would have been better
but i was to hard headed not to go all the way to the end.It sucked till the very end.

Get a beer, not this.

I felt as if the guy reading it was doing so for the first time and that the author ripped off every 1940's space opera off to conserve the story line for better writers.

I coulda love the story had the author found one path to follow. A tale about a burlt, too large guy that ends up married to a peer of the realm but is just a home spoken hick got rather pedantic by chapter 6. You just kept listening to see how insulting the author could be!

the 'reader(?)' can we call him that? Was only barely better that my 7 year old grand daughter. His delivery was lack luster and un-inspired. Larry Pressman! where are you!

Do you think Galactic Freighter needs a follow-up book? Why or why not?

I kept the book 'cause I walk and bike while listening to the books. The best thing about this was that this book and it's reader did not interfere with those activities in the least!

Would you try another book from Kenneth E. Ingle and/or Joe Farinacci?

Based on my experience with this book I won't even consider another book by Ken / Joe. I've had junior varsity readers that had more excitement than this book delivered. Each step in the story (if you can call it that) was predictable with absolutely no suspense or build up.

Lack of plot. I was halfway through the story when I realized I really didn't know why I was listening. I hoped, and was disappointed, that there would be an "ah-ha" moment somewhere and I'd become hooked but it never arrived.

In most instances when the author reference "time" it was in "T-Minutes", or "T-Hours". After chapters and chapters of this we get the hint. As a reader (listener) I don't care about "T" anything. Just disappointed that I wasted my "T-Time" listening to this monotone voice drone on about a Space Freighter.... yawn!

Joe has an almost monotone quality to his voice. There was no change in timbre or inflection when the dialogue switched between characters.

After hearing books narrated by Scott Brick (Sword of Shannara) or John Sharian (Black Jewels series) I've come to expect so much more from a narrator.

If you want to listen to a good story with lots of space combat try the "Lost Fleet" series by Jack Campbell. Lots of great action that leaves you guessing even though you know the good guys win in the end.