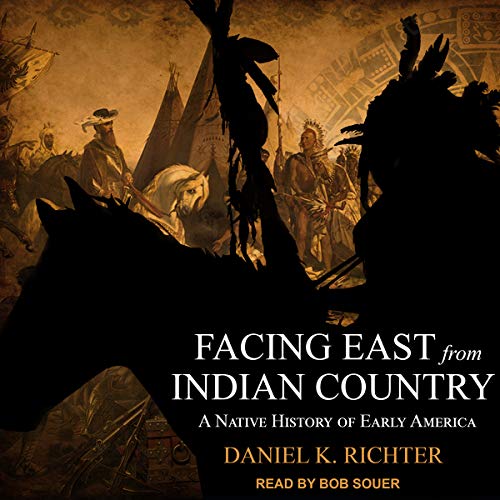 By: Daniel K Richter
Narrated by: Bob Souer
Try for $0.00

In the beginning, North America was Indian country. But only in the beginning. After the opening act of the great national drama, Native Americans yielded to the westward rush of European settlers. Or so the story usually goes.

Yet, for three centuries after Columbus, Native people controlled most of eastern North America and profoundly shaped its destiny. In Facing East from Indian Country, Daniel K. Richter keeps Native people center-stage throughout the story of the origins of the United States.

Viewed from Indian country, the 16th century was an era in which Native people discovered Europeans and struggled to make sense of a new world. Well into the 17th century, the most profound challenges to Indian life came less from the arrival of a relative handful of European colonists than from the biological, economic, and environmental forces the newcomers unleashed. Drawing upon their own traditions, Indian communities reinvented themselves and carved out a place in a world dominated by transatlantic European empires.

In 1776, however, when some of Britain's colonists rebelled against that imperial world, they overturned the system that had made Euro-American and Native coexistence possible. Eastern North America only ceased to be an Indian country because the revolutionaries denied the continent's first peoples a place in the nation they were creating.

In rediscovering early America as Indian country, Richter employs the historian's craft to challenge cherished assumptions about times and places we thought we knew well, revealing Native American experiences at the core of the nation's birth and identity.

What listeners say about Facing East from Indian Country

Not quite what it purports to be

Perhaps it might be expecting too much for an American of European heritage to succeed in such a task. By definition, he is explaining native history through his own prism of experience. I don't doubt that he is sincere in his effort, but unfortunately it falls short of expectation, in my opinion.

First of all, he freely acknowledges that the premise is daunting to start, as there are precious few documents or archives detailing anything like a comprehensive native view of the history of the continent. And even then, they're mostly filter through Eurocentric translators and historians, rendering them all but useless for this endeavor.

Secondly, is the apparent need the author feels to present some kind of moral equivalence to the conflict between white Europeans and various native peoples. (Don't believe the Amazon detractors claiming that it's all about blaming white people for everything, it's far from that). Europeans do get their fair share of criticism, justly, for their motivations and actions regarding the people inhabiting the land. But the author is far too speculative on the motivations of the natives in creating what he characterized as essentially mutual efforts of ethnic cleansing. Only in the epilogue is that notion, dripping in irony in the "stand your ground" era in which we live now, addressed.

There's a bit of the Monty Python "What did the Romans ever do for us?" sentiment, which might be legitimate to a point, for the technology and wealth brought by Europeans (but at what cost to native culture). But also a bit of speculation, reminiscent of Lost Cause rationalization, that native culture and populations, like slavery, would have eventually died out anyway. Which seems a bit absurd, and more than a little cynical. I'd like to think the author is just presenting the old views, which he is trying to contrast against, but it's hard to tell.

But mostly, the book fails to deliver a true voice of native people. Again, perhaps I was naive to think this author could achieve it. As it stands, it's a reasonably interesting history of the continent, but still predominantly Eurocentric. The author could have made some effort to distinguish the contrasting views better, for example with his use of the names Metacom vs. King Philip. They are used interchangeably throughout the text, sometimes within the same sentence. But never is there a demarcation of the European view of King Philip, against the view of Wampanoag history of Metacom. Seems like a natural way to frame the story. Similarly, the name Mataoka is mentioned perhaps once or twice in passing, but most of the account of Powhatan interaction with English colonists is from the European perspective, and how the stories of Pocahontas have it all wrong (hardly breaking news). I feel a native writer may have been more insightful on such matters.

All in all, I'll give it a reasonably positive review (the mouth-breathing of the narrator notwithstanding). It's clearly a well-researched, quite comprehensive history of Early American interactions of natives and Europeans, but it's not really anything different than what's already on offer. Perhaps it was in 2002.. Still, it's not really facing East as much as it would have you believe.

This is a bad audible book to listen to. I’m a driver so I listen to a lot of books and podcasts. This book right here almost had me falling asleep halfway through!
So bad that I had to stop at a disgusting truck stop in Chicago, grab the darkest coffee, put 10 packets of sugar in it, then debated whether or not to give the ugly lot lizard $20 dollars just to wake me up.
You can tell the narrator was getting tired as well. He’s a bad reader and the book is bad. It could be better if you’re really Christian and love reading books about Europeans forcing Christianity on indigenous people. Do not read.

P.S
I didn’t get the lot lizard. I know my boundaries

My social studies teacher challenged me that i wouldn't read it i ended up reading the book 2 years later i loved it its perfect if you are into old Indian stories.