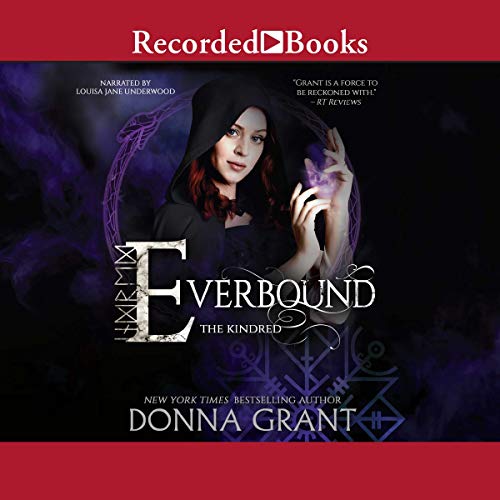 By: Donna Grant
Narrated by: Louisa Jane Underwood
Try for $0.00

To live in the light, they hunt in the dark.

The power of Helena's magic has made her a target for the Coven. She wanted no part in the war of the witches, but it's out of her hands now. She has to make a stand - and she does that by helping the Hunters and their allies against their common enemy. And now, the witch who ripped Helena's future apart is coming.

Sybbyl's vengeance is swift and terrible, pitting the two against each other. But Helena doesn't have to fight the Coven alone. A seductive warlock offers his aid. Helena is hesitant to give her trust to him - because it's more than her life on the line. It's her heart as well.

As the most feared and respected warrior of the Varroki, Jarin is used to being on his own. But with the Coven's quest to locate the bones of the First Witch escalating, he finds it increasingly difficult to retain his solitary existence.

When Jarin encounters Helena, he is helpless to resist her. She's everything he didn't know he wanted, and with her help, he's convinced that maybe his people can finally defeat their foe. But there's so much more at play than they know - ties in blood and sacrifice - and the loss that's sure to follow may be greater than any of them can bear.

What listeners say about Everbound

I thought the Hunters would get the staff back after it was stolen in the previous book. Instead, the powers of the Eternal Staff is unleashed. The Hunters base of operations and everyone in it are slaughtered. Dang, I thought Edra & Radnar would get away, I didn't see that coming. Black Glade is discovered and Sybbyl wants the Warlocks for her personal harem. The Coven turns its sites on Black Glade to wipe them out at the end of the book. Maybe Black Glade will have better luck than the Hunters.

Will definitely get the next book when it comes out. This is actually a great series by Donna Grant. I love the descriptions of the Witches Grove and of magic being used. Makes a great visual.

After reading and listening to the entire series in this collection by Donna Grant, I was disappointed in the ending and destruction within the last parts of Everbound. To me, it negated the wonderful stories of The Kindred and I found it to be unnecessary. I don't think that I will read or listen to the new book and I'm sorry that I finished Everbound. I gave the story 2 stars because I loved the book up until the final parts of the story.

loved it. great story and reader. I am looking forward to next book. I like the series.

This is book 3 in the Kindred Series. Just as the first 2 it was a great read. We met Jarin and Helena in previous books. We got to know a little about Jarin but not Helena. Helena has been running from the coven for years. But now she is ready to take a stand. Jarin is a Varroki Warrior. With his Hawk and Wolf companions he is a formidable Warlock. Together he and Helena work together to stop the Coven from collecting all the bones of the First Witch. And they fall in love along the way.