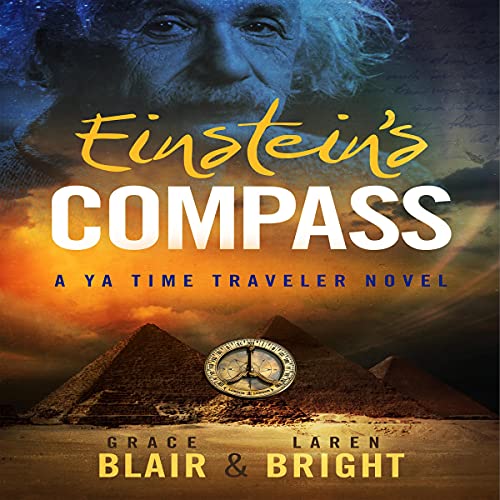 By: Grace Blair,Laren Bright
Narrated by: Curt Bonnem
Try for $0.00

How did Albert Einstein come up with his wondrous theories of light and time?

In Einstein's Compass: A YA Time Traveler Adventure, a young Albert is gifted a supernatural compass that allows him to travel through time and space. He finds wisdom in other dimensions, like the lost city of Atlantis, but evil forces seek the power of the compass, including a monstrous, shape-shifting dragon from a different age.

Can the compass protect Albert from such villainy?

What the critics say:

"Albert Einstein has appeared in Doctor Who a couple of times during the show's long history, most recently in the mini episode "Death Is the Only Answer", but what has been sadly lacking is a full-on, Einstein-centric, time travel adventure. While we wait for that day to come, our attention was drawn to Einstein's Compass, a young adult time travel adventure from the joint pens of Grace Blair and Laren Bright.

Focusing on a young Einstein, the story sees our famed mathematician given a special compass from his father - a compass which opens the doorway to an adventure that spans millennia. From mythical Atlantis to ancient Egypt, through biblical times to mystical beasts, it's a nonstop whirlwind of time travel fantasy, with a good old dash of good versus evil that will have you gripped throughout.

Einstein's Compass has a real vibrancy, thanks in part to the way in which the many locations are brought to life in broad technicolor strokes, juxtaposed with the authors' rounded characters - some of which you will know and get a kick out of their interactions.

Whilst the content is almost wholly a work of fiction, there are factual elements peppered within that add a wonderful balance, keeping the reader's mind open to the possibilities - something that Einstein was renowned for and also something that this book ultimately pays tribute to.

This is a book that is written by two authors, but yet it reads absolutely and unequivocally as one. You sense no conflict in tone or direction, nor do you feel like the narrative is pulling in any jarring direction. Clearly, this is a work of genuine passion from Blair and Bright, and it shines in every drip of ink on the page." (Sebastian J. Brook, actor and writer)

What listeners say about Einstein's Compass

Great Read – I Hope There are More to Come

Anyone who reads my reviews will recall that I am not a fan of high fantasy. I read the summary of this book and loved the concept from the start; however, I was almost thrown by the prologue. I’m very glad I kept going! In addition to the unique concept from the author, it was fascinating to think of Einstein as a child. When most think of him it is with his wild hair, similar to the cover photo used on the book. To imagine him growing up with such a mind was a great treat as well.

Mr. Bonnem did a great job as narrator as well, especially with the accents. All of the base narration was in English, but the dialog was all done with appropriate accents as well as tonal differences for the characters. It was great!

I really hope that Ms. Blair and Ms. Bright continue this concept and create more books with this theory. It was wonderful to see everything play out in the realm and the concept of those folks (not named for spoiler sake) sitting together was quite amusing.

Einstein's Compass was a fantastic listen. I found the start a little slow, but otherwise the story went on an amazing adventure. I loved that it combined several genres/themes I enjoy such as time travel, historical fiction. sci fi, and fantasy, and some religion as well. I do not feel this book is exclusive to the YA audience either. I felt the story was extremely unique to anything I have read or listened to in the past. It is a book I will listen to again in the future.

Curt Bonnem does a great job with the voices, narrartion, and drama.

Such a fantasic listen all the way around.

My son and I both liked this one

This was an interesting listen. First, I think the narrator did a good job. His accent made it very interesting and fitting for a story about Albert Einstein. I think the premise is clever and thought they executed it well. My 11 year old son and I listened to this one together and we both enjoyed it. He more than me, but the salient point being we both got something out of it. I will warn you, though, it has to build up a bit before the story really takes off. Thankfully, it is just the first couple of chapters that are a little slow. After that, though, I felt the pacing was good. All in all, I would recommend this one.

Imagine Albert Einstein as an easily bored and extremely intelligent young boy, a supernaturally magic compass, a dragon and time travel all in one book! Gifted with a magical compass, Einstein travels through time and space discovering and growing his theories of light and time. Faced with forces of evil bent on obtaining the compass, Einstein is protected and guided by Moses and other beings of light and goodness from the Bible. The fallen angel forces Einstein to use his wit and the compass to remain safe and keep the powerful compass from falling into the wrong hands.

Both Grace Blair and Laren Bright took a historical character and intricately blended this adventuresome fantasy. I loved it completely. The different time periods depicted in this story were based on historical fact, mythology, and common belief which made the story richer. I loved the vivid imagery the authors created. The character development was smooth and complete. The plot twists were brilliantly executed.

The narrator, Curt Bonnem was an excellent choice for the book. His German accent, cadence, and tonal inflections were spot on. His masterful voice kept the listener intrigued and the story moving forward. He projected the right amount of emotion – confidence, curiosity, snark, and more that aided in the development of the characters.

Well done book and I look forward to more written by Blair and Bright!

The audio production of this book was well done and clear.

Mixing a lot of historical facts and religious references (from many creeds) this story follows young Albert Einstein in his task to protect one mysterious compass he received as a gift.
The anti-hero is a power collector dragon shifter so the story is original in the way it mixes in a interesting way a lot of themes.
I loved the character of young Albert, specially brought to life by the narrator Curt Bonnem, but sometimes I wished a bit of more depth from the other characters, as the story is not that short.
The russian accent for some of the characters works great, but it may be a bit difficult sometimes for not experienced listeners. I do recommend the audiobook, still.
Full book with no cliffhanger.

A thrilling and engaging metaphysical tale of good vs. evil involving Albert Einstein as a teen and young adult. The story started out in the ancient continent of Atlantis, which is where the antagonist hailed from. He later time traveled to Einstein's life in the early part of the 20th century, seeking a handheld object with spiritual powers that Albert considered to be a compass. Splendidly written and narrated, it's one of the few audiobooks I've ever listened to, and whets my appetite for more!

Albert is given a wonderful gift when he's young. This gift can help him travel through time and space. It helps him collect very important data he needs for his scientific research. What he doesn't know is that evil is lurking about. They want the compass in which he has possession of. They will stop it at nothing to get this compass from him. They will take down whoever they need to get the compass. Including Albert. This book really drug my emotions through the rocks. I can't even. There were so many sad parts. Then there were parts that made me angry. Then there were parts where I was at the edge of my seat trying to figure out what was going on! It was all over the place. It was intense. It was thrilling. I loved every minute of it. I find that the very idea behind the story was brilliant. I get that it's actually based on Albert Einstein. I think that's what adds to the allure of the story for me in my opinion. This book was narrated by Curt Bonnem. As if my emotions weren't already in the raw as it was. He had to go intensify them by intensifying his voice in all the right moments! I don't think it's fair! He has a pretty impressive library that he's narrated. This is the first book that I've listened to by him. It's not going to be my last. Not by any means. He has some amazing talent. I gave this some time to let my emotions settle. It was for the best. It's a great book. I'm not going to lie, the book could have been expanded a bit. It could have had a lot more scenes added to it in all truth. Most of the story could have been told more about Einstein's point of view so that we could see the beauty of his genius. Or his points of view could have been added to more and the other points of view stayed the same. Either way, I enjoyed it very much.

What a creative melding of religion, myth, and history! Blair has created a great story!

This was a really interesting premise, not something I've listened to before. It was great for a departure from my usual fare. I'd give it a solid 4 stars, with an extra star for the narration, which really made the book for me. Good YA listen.

It took me a bit to get in to it. I’ll admit the dragon threw me off but I kept going and glad I did.
I’ve always had a slight fascination with Einstein and I really enjoyed this story. I would recommend this for ages 10 and up.
Curt did an absolutely amazing job narrating this story. His accents and tones were just spectacular.