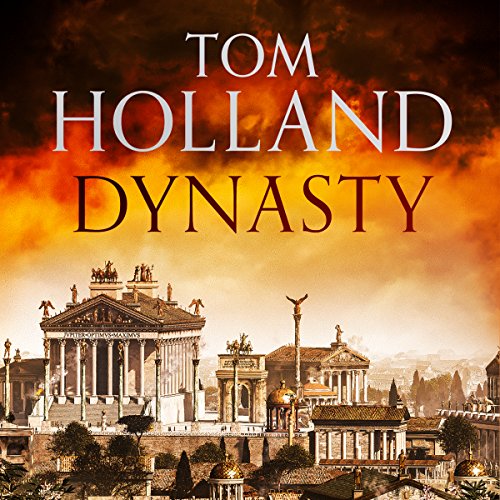 By: Tom Holland
Narrated by: Mark Meadows
Try for $0.00

Dynasty tells the story of Rome's first dynasty of emperors, from its establishment by Augustus Caesar in the last decades of the first century BC to its final, florid extinction less than a century later. The line of autocrats known to historians as the 'Julio-Claudians' remains to this day a byword for depravity.

The brilliance of its allure and the blood-steeped shadows cast by its crimes still haunt the public imagination. When people think of imperial Rome, it is the cities of Tiberius and Caligula, of Claudius and Nero that is most likely to come into their minds.

What listeners say about Dynasty

Tom Holland has an encyclopaedic knowledge of Roman history and a sharp eye for luscious and telling detail. His portraits of Roman emperors, from Julius Cesar to Nero, are compelling and the glimpses of Roman culture highly entertaining.

I learn a lot of history from Dynasty. But I recommend it because Holland tells a great story and the narration is superb.

Fantastic book. Narration excellent, but Tom Holland's understanding and bringing to life of this period is mesmerizing!

Very detailed and well written book. There was a lot in this history that is not generally known because most Roman history covers 900 year, but this covers only the short period of the Julio Claudio dynasty in a lot of depth.

A hugely enjoyable listen. I thought I knew the narrative of these characters and their lives inside out.
I was wrong.
Tom Holland provides rich context, wonderful insights and fresh perspectives.

Magnificent in scope, it paints a picture of the time - little more than a century -in which Rome conquered the world, while at the same time corroding its very core, Its moral rectitude and contempt for the rule of monarchy.

Holland paints this on a broad canvas encompassing everything from Ovid’s revulsion at the uncouth manners of the hinterlands to the gaudy excesses of Tiberius’ Capri or Nero’s rebuilt Rome, with a truly stunning sense of the telling detail

Holland has a marvellous gift for psychological insight, which enables him to judge the outrageous acts of some of these emperors both with the high moral standards of ancient republic and with the perverted sense of showmanship that they used to justify their deeds

Great reflection on the age of house of Caesar

As usual Tom Holland delivers! Great review of the tumultuous years after the ascention of Augustus, based largely on the personalities ot the Caesars.

Loved the book, narrative history at it's finest. really puts you in the time period. narrator was perfect throughout. read or listen to Rubicon first, leads perfectly into this one.

If you could sum up Dynasty in three words, what would they be?

What was one of the most memorable moments of Dynasty?

What does Mark Meadows bring to the story that you wouldn’t experience if you had only read the book?

No. I like to listen to audio books as I complete other tasks

I recommend this audio book to other listeners who love history

This was a gripping and compellingly narrated audio book. Narrative history at its best.

Tom Holland is my favourite writer/historian of Ancient Rome. He brings that world to life so vividly and his use of language is wonderful. As narrative histories 'Rubicon' and 'Dynasty' work incredibly well. I hope he writes another book; perhaps on the Year of the Four Emperors and beyond. Mark Meadows' narration is great and complements the text.

Easy to listen to and very engaging. I have been a massive fan of Tom Holland since Rubicon. Recommend this book!

The old saying is true…

…the first generation establishes the business fortune, the second generation builds on it, the third fritters it away…

Excellent rear, in true Holland style where he takes a tale which many have told, and tells it better.

Excellent for history fans and people needing to know the history of the house of Caesar. However, it does favour a smooth narrative over dealing with conflicting sources.

Great book. Well worth a listen.

if you love roman history Tom Hollands book is a great piece of work regarding the genre. read by a good narrator too