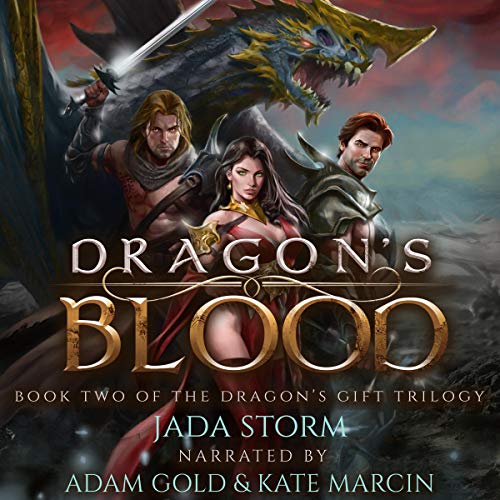 By: Jada Storm
Narrated by: Kate Marcin,Adam Gold
Try for $0.00

Stolen from her homeland. Separated from her mates. Is there any hope for Dareena and her dragons? Or is their kingdom destined to fall?

When Drystan and his brothers managed to drive their madness-stricken father from the throne, Dareena thought the worst of their troubles were over. But the elves are knocking at their door, demanding reparations, and with a new general at the helm, they will not let Dragonfell off the hook so easily.

To buy their kingdom time and save their armies from certain destruction, Dareena and Alistair allow themselves to be taken to Elvenhame, where they will be held hostage until the countries can come to an agreement.

But while the two kingdoms squabble, the real enemy continues its insidious assault. Both Dragonfell and Elvenhame unknowingly teeter on the brink of destruction, and unless Dareena and her mates can uncover the true conspiracy, their world will fall to darkness....

Don't miss this next installment in this scorching-hot reverse harem fantasy trilogy.

What listeners say about Dragon's Blood

Love the story concept, characters & explicit provocative scenes. You have to let go of inhibitions about sexuality & enjoy the trilogy. I also can't wait for the final book. Adam Gold has become my favorite male narrator - his tone of voice & character performances are very manly & smooth. I've hit replay on both audio books just to listen to his voice.😄

Can’t wait for the last in the trilogy!

Well written and well read! I was hesitant about starting the trilogy much less the first book but it’s opened my mind and that’s always a great thing. I could have done with out some of the more explicit details but that was really my only hang up and that’s my shit, and has no bearing on the writing whatsoever. Take a chance and try to keep your mind open. Happy reading!

Loved this part of the story as much as the first. I don't like that they call this a reverse harem story, because it definitely is not. Yes, it is a multiple males to one female, but it is so much more than that. Love the characters and the story line is splendid, awesome, amazing and so much more then just sexual. Will be listening to the last in this series. Which I am looking forward to but will be sad to it coming to and end.

The voice actors were amazing! I love that men read the male parts and females read the fenale parts, rather than having one read the entire chapter.

To the authors: please vary the descriptions. "You could have knocked me over with a feather," "By the Gods!" and other phrases were repeated too many times. Cliches are useful when used sparingly; used too much, they distract from the story.

Looking forward to the next book!

When considering this series in reading one of the book reviews I read someone suggest this story to be realistic and I thought, if you ignore the magic and dragons aspect then yes, I would agree, it is very much a tale of kings, queens and fights over supremacy with the added twists and turns of magic and dragons intertwined. I very much recommend this book series but I will also note it really is made for an adult audience and it has a great deal of explicit sex contained, you might say 3 times the ordinary amount 😋 The narrators are fantastic and I cannot wait for the final book to be made available on Audible.