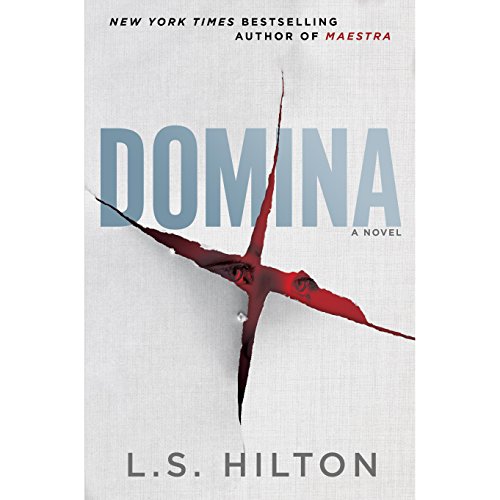 Since opening her own art gallery in Venice, Judith Rashleigh - now Elisabeth Teerlinc - can finally stop running. She's got the paycheck, lifestyle, and wardrobe she always dreamed of, not to mention the interest of a Russian billionaire. But when a chance encounter in Ibiza leads to a corpse that is, for once, not her own doing, she finds her life is back on the line - and she's more alone than ever. It seems Judith's become involved with more than just one stolen painting, and there is someone else willing to kill for what's theirs.

From St. Moritz to Serbia, Judith again finds herself maneuvering the strange landscapes of wealth, but this time there's far more than her reputation at stake. How far will Rage take Judith? Far enough to escape death?

The second installment in an unforgettable trilogy, Domina is the next sexy, ruthless, and decadent thriller from mastermind L. S. Hilton and an adventure that will push Judith further than even she imagined she could go.

“The sequel to Hilton’s masterful Maestra... [is] even more impossible to put down, more twisted. The concluding installment in the trilogy can’t come soon enough for fans of psychological thrillers.” (Booklist [starred review])

“[C]ompulsively readable - like a ritzy 50 Shades meets The Da Vinci Code. It's got sex, shopping, a few Old Masters and plenty of murder - what more could you want?” (Irish Independent)

What listeners say about Domina

loved maestra. narrator was stellar with pronunciation.
however, the entire book was a practical stream of consciousness:
- thoughts about characters we don't meet, - - paranoia without a source.
- too much reference back to events of book one Maestra.
Also, not nearly as sexy as the first book. very weak and hope book three will be better.

I read Maestra and had mixed feelings about it. I decided to read Domina to see what Judith was up to. She's an exciting character.

While there are a lot of things that are good - the author did her research on art, high fashion, etc - the storytelling is just terrible.

First, the transitions. It is hard to follow along. One moment she's in Venice. Then Ibiza. Monaco. Paris. The transitions are so poorly done that half the time, you don't know where Judith is or who she's with.

The list of secondary characters is so long and none of them play a meaningful enough role. It's difficult to remember who's significant.

Other than that, the story is just too convenient for Judith. She finds herself in sticky situations, but they aren't convincing enough - she always has a perfect route out. Not to mention the disposal of bodies is so vague.

Domina goes a little further into her background, which helps round her character out a bit more. Vague spoiler - the flashback in one of the very last chapters with her mom is disgusting, and seems to only have been put in as a side note, for shock value.

This whole book has a lot for pure shock value. I don't mind sex scenes, but these aren't even steamy - they're pornographic.

For the audiobook, I did like the narrator. She did a great job at accents and had range in her voice.

Domina is the sequel to Maestra and revolves around the very same pillars of the first book : 1)the art business and the shady international and greedy world of collectors, 2) the murders and the violence that Judith –the main character- has to accomplish both to survive and to get rich and 3) sex –although very much less than in the first book – that seems to be the unavoidable link between greed, violence and money.
The plot moves fast between different European cities (Paris, Venice, Belgrade) and various characters (but some of them are very roughly sketched and a bit of stereotype) and is full of turns and twists that are meant to keep the attention of the reader. LS Hilton is a good writer, very credible when it comes to describe artists and artwork and to give us a good feel for the various cities where the action take place.
The book however is not fully convincing. Probably the main reason is that the character of Judith is flat : no feelings , no emotions and, regrettably, no charm. We do not know anything of her physical appearance, know little of her past (rather squalid, I must say); she has sex with the same passion I put in put in preparing scrambled eggs (the book is in fact mildly graphic, not at all sexy). The reader is left totally disengaged and without the necessary “participation” that makes an ok book become a really enjoyable experience.
Nevertheless, the concepts (art, murder and sex) at the basis of Maestra &amp; Domina are appealing for a thriller : I am waiting now for episode three hoping that the character of Judith is better developed….

❤️ Finally something fresh, new, and captivating! There's a little Judith in all of us.