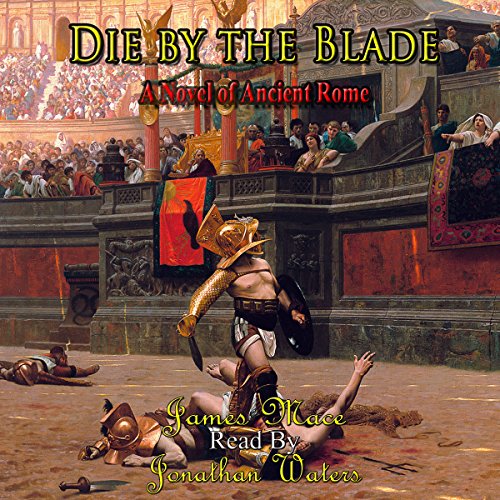 Die by the Blade

By: James Mace
Narrated by: Jonathan Waters
Try for $0.00

Thus Valour and Skill Have Their Reward

The year is 77 AD. On the frontier of the Roman Empire, a Dacian man named Verus is captured and enslaved during an imperial raid north of the Danube. He is sent to a rock quarry known as The Pit, as one among thousands of fresh slaves needed to mine marble for Emperor Vespasian's new amphitheater. Funded by spoils taken during the Siege of Jerusalem, the Emperor promises it will be the largest gladiatorial arena ever; his personal gift to the people of Rome. Requiring years of herculean labor and millions of cubic feet in stone, Vespasian's son, Titus, worries whether his father will live to see its completion.

After months of back-breaking suffering and toil, Verus is taken from The Pit to become a gladiator. Whether by chance or fate, he knows that only by making a pact with death will he have a chance at life. In a savage world of blood, sweat, sand, and steel, his very soul is forged, until he no longer remembers the man he once was. As the Flavian Amphitheatre nears completion, with the possibility of fighting before the Emperor himself, Verus swears to either win his cherished freedom, or ignominiously die by the blade.

What listeners say about Die by the Blade

Great performance by Jonathan Waters. I struggled to follow the characters. Much like Game Of Thrones many of the names started to run together. One character even IS the same name as a GOT one. Overall a good book with well rounded plot lines.

I feel like we don't have a lot of these types of stories. After watching Spartacus and finishing I've never been able to scratch tat itch. I train in mma as well which is somewhat like a modern gladiator. So you know the premise of a gladiators would interest me. I did enjoy the story more than I expect other people to do, so keep in mind if gladiator type stories are not your thing.

I highly recommend this for people who are really in to this type of story.

Takes awhile to get into it, but worth the wait

The book starts a little slow, and I could have skipped the perspective of the Legion as they are planning to go on their raid, but once we got to the Ludus, it really picked up steam and I was very invested.

The characters could have been a little more well rounded and less one dimensional, but it was very clear that the author did extensive amounts of research all the way from the big points about the Roman Emperors to the small things like Romans eating stuffed doormice (true, and gross). As a history nerd I really appreciated the amount of detail that went into the book.

The reader was solid, although his pronunciation of the Danube is bizarre. And a couple of other words were pronounced strangely. But that aside, I really appreciated that his female voice for the "Lady of the Sands" wasn't a caricature. I usually don't like men attempting women's voices, but this was very well done.

Overall I recommend, but you need to give it a couple hours before it really picks up steam. I would definitely give a sequel in the series a listen.

I received this book in exchange for my honest review.

I'm quite the fan of historical fiction, I love how it can breathe life and perspective into great characters and events that we know of, but will never really know. But that's not all historical fiction can do. An author such as James Mace can take an obscure and mostly irrelevant piece of history, and create an enjoyable tale with characters and events that are mostly lost in the sands of the time.

Mace tells the tale of Verus, a Dacian blacksmith who in 77 AD takes up arms to help his people fend off the advance of the Roman army into his territory. Fine warriors though the Dacians may have been, they were no match for the Roman army, a fighting force with hundreds of years of experience. Verus is first sent to a marble quarry, but after spending time there, he gets sent to become a gladiator, a slight improvement on his current state of affairs.

The bulk of the story tells of Verus' trials as a gladiator, and also his friend Prisus (audiobooks don't help with spelling), a Pict (never read a book with a Pict before, as far as I remember) who is the combatant all combatants want to be. Prisus is a likeable character. He's not the killer we expect from gladiator stories, and for the three years of the book, he mourns that he may never see his family again. Prisus on the other hand is a killer, but he's the kind of likeable hardass counterpoint to our hero. The Romans are suitably ghastly, but they add colour to the story when in there, as opposed boo-hiss panto villains. The historical facts and the knowledge of gladiatorial history rings true, although I'm no expert on this matter. The story never goes quite as you'd expect, which is great, and the combat scenes are nicely done.

The narrator does a good job, adding distinct voices to characters, while moving the pace effectively.

4-4.5/5 stars - looks like I"ll have to add James Mace to my ever growing list of must-read Historical Fiction authors.

In every historical fiction there is a piece of history

What makes historical fiction wonderful is this. It can take one tiny tiny piece of historical fact. In this case the names of two gladiators and of course the general knowledge of the times and it’s peoples and activities. But for me it was those two names, those two gladiators of whom the story was based on. Their history and their life is that of pure fiction. Their loves their trials and their triumphs the same. But they were real and this book takes that reality and brings them to life for us to know and walk side by side with. Great story of gladiatorial combat. I was voluntarily provided this free review copy audiobook by the author, narrator or publisher

having read another of Jame's books I was looking forward to listen to this one and I wasn't disappointed. The story of the main character was interesting,whilst the action quick and intense. The narration is done well with distinctive voices for the different characters. I really enjoy historic fiction such as this and I look forward to reading/listening to more of Jame's books in the future.


Please note that I was provided with a copy of this audiobook to provide a non-biased review.

This is a good story. I might have wished for a bit more character development and description of life in Rome at the time. I do wonder about the accuracy of some of the aspects of this story, though.

Jonathan Waters delivers a very competent performance. He makes a reasonable effort at giving distinctive voices to the characters. I'm satisfied with his narration and the story.

I really am interested in this time period of history. I am fully aware that most history books are written by the winners. But the fiction about this time period is written from all sides. I believe I am still living under a Caesar now. With the wealth accumulated would have spent to wipe out the death by famine of Roman citizens. There would have been no need for the arena. Anyway, I highly recommend this book . Now for the obligatory: "I was given this free review copy audiobook at my request and have voluntarily left this review."

A Little Slower than I had hoped

While I appreciate all of the research that was done for this book, I rather felt that it bogged the story down a bit.

Jonathan Waters does an admirable job and was quite impressed with how well he handled the ancient Roman name.

I didn't love it...but didn't hate it either.

EXCELLENT historical fiction based on fact

Classic, exciting gladiator story by James Mace of Verus and Priscus, two real gladiators who fought on the opening day of the 100 days of games in 81 AD, and whose incredible battle was memorialized by the writer Marcus Valerius.
This fabulous book covers a bit of history of the reign of Nero, the building of the amphitheatre,
the eruption of Mt. Vesuvius, the siege of Jerusalem, the Roman conquerers, and fills in the blanks I had about where the labor and marble came from. Having toured the amphitheatre in Rome at the time the pandemic struck in March of 2020, this story was so real to me. The amphitheater itself is a breathtaking beast and this book really brings it to life.
Jonathan Waters is a WONDERFUL narrator, a true voice acting professional. His performance made this book one I couldn't put down. I was laying in bed at 2 a.m. listening to it because I couldn't shut it off.
I was provided this amazing book in exchange for an honest review.