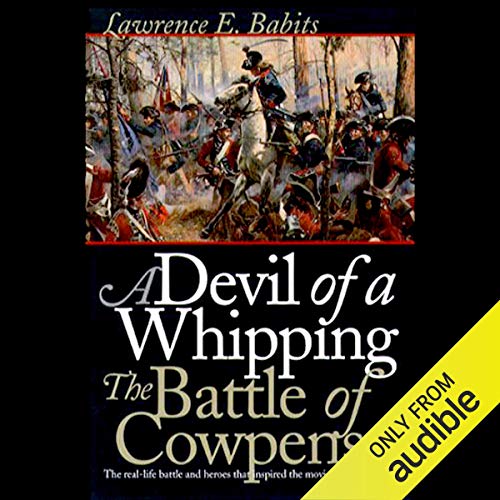 Devil of a Whipping

By: Lawrence Babits
Narrated by: Knighton Bliss
Try for $0.00

The battle of Cowpens was a crucial turning point in the Revolutionary War in the South and stands as perhaps the finest American tactical demonstration of the entire war. On January 17, 1781, Daniel Morgan's force of Continental troops and militia routed British regulars and Loyalists under the command of Banastre Tarleton. The victory at Cowpens helped put the British army on the road to the Yorktown surrender and, ultimately, cleared the way for American independence.

Here, Lawrence Babits provides a brand-new interpretation of this pivotal South Carolina battle. Whereas previous accounts relied on often inaccurate histories and a small sampling of participant narratives, Babits uses veterans' sworn pension statements, long-forgotten published accounts, and a thorough knowledge of weaponry, tactics, and the art of moving men across the landscape. He identifies where individuals were on the battlefield, when they were there, and what they saw--creating an absorbing common soldier's version of the conflict. His minute-by-minute account of the fighting explains what happened and why and, in the process, refutes much of the mythology that has clouded our picture of the battle.

Babits put the events at Cowpens into a sequence that makes sense given the landscape, the drill manual, the time frame, and participants' accounts. He presents an accurate accounting of the numbers involved and the battle's length. Using veterans' statements and an analysis of wounds, he shows how actions by North Carolina militia and American cavalry affected the battle at critical times.

And, by fitting together clues from a number of incomplete and disparate narratives, he answers questions the participants themselves could not, such as why South Carolina militiamen ran toward dragoons they feared and what caused the "mistaken order" on the Continental right flank.

"One of the best analyses that we have of an individual Revolutionary War engagement." ( Journal of American History)

What listeners say about Devil of a Whipping

This book is NOT a novel. It is an in depth review of a pivotal battle of the American Revolution. It really isn't something you can listen to in your car on the way to work. You'll need the reference maps and documentation to follow along.

If you are into the study of military tactics, this is a great book. If you are looking for an overview with entertaining dialog, this book is not for you.

the Narrator using quote and unquote is very annoying and takes your focus off the story. there is no need to use those words in telling this story, I will avoid this Narrator in any future purchases no matter how good the book is.

Use of Quote in the narration

As for the author, no need to use quotation for mundane descriptions.

Reading the book now because narration so difficult to get through

I think being a British Officer in the battle would have been more enjoyable than listening to this repetitive dribble. if you can avoid reading it please for your own sake do.

This book is not for the faint of heart. You must be a real military historian to really enjoy this book. The story is very well researched and written but the narration simply kills it.

The Reader Was A Bot

The history and story behind Cowpens is compelling but the audios delivery was awful. The unwavering voice with mispronounciations was really insulting and I wanted my money back from the start. Audible should know better!!!

Poor narration made the listening monotonous. Also, one needed a map to keep track of all the geography noted by the author regarding troop movements.

...put simply, this excellent book was made unlistenable due to the horrible droning narration - I’ll never listen to that reader’s titles...he shouldn’t be used as a narrator again.

Unlistenable in my opinion...such a shame.