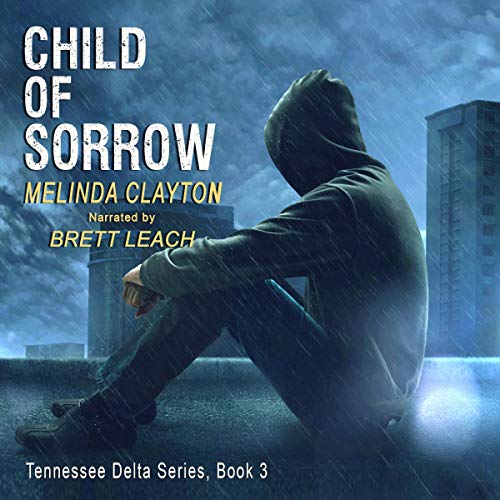 By: Melinda Clayton
Narrated by: Brett Leach
Try for $0.00

When 14-year-old foster child Johnathan Thomas Woods is suspected of murder, an old letter and a tacky billboard advertisement lead him to the office of attorney Brian Stone. Recognizing the sense of hopelessness lurking under John’s angry façade, Stone is soon convinced of his innocence. When John offers up his lawn-mowing money as payment, Stone realizes this is a case he can’t refuse.

In the face of overwhelming evidence assembled by the prosecution, Stone and his team find themselves in a race against time to save an angry boy who’s experienced more than his fair share of betrayal, a boy who more often than not doesn’t seem interested in saving himself.

What listeners say about Child of Sorrow

And the beat goes on

This is the third book and what could be called a Siri’s and even though they have recurring characters and problems from the previous books they are definitely standalone reads. And this one we find a lawyer Brian after having a very bad day with a client and almost getting stabbed to death with a pin on his way to his office and almost tripped over a bicycle parked in front. When he goes into his office he finds a disheveled young man named John wanting to give him his PlayStation money so he will defend them against murder charges on his foster mom. 14-year-old John is soaking wet, has a filthy mouth and Brian can’t help but to feel sorry for him and decide to take his case. That is a Bryans only problem though someone is stalking Lena who he helped get a credit and they never found out who the real murderer was. Is it Rebecca is she stalking her sister and Brian and John out of murder charges. This book is so good unlike all of Melinda‘s box is character driven an action packed. I loved it and highly recommend it to those who love a good legal thriller, who done it and the underdog wins the day. I can’t recommend this book enough it was so good.

I didn't listen to the first two books in this series but this was a complete story that stood on it's own.

Brian Stone is a great character! He's a very smart lawyer with a great sense of humor (and self.) In this listen, he's trying to help a teenager who is doing nothing to help himself. There were a multitude of layers and some really great interpersonal relationships. Loved it!

The narrator performed the character quite well. Great listen!!

I absolutely loved it! This book was full of drama and suspense! This book caught my attention from the very beginning and held it throughout the entire book. The narration was outstanding and gave the story that extra flair! It will keep you entertained! The author did an amazing job with the character builds and plot! This was my first book by this author but definitely not my last! I look forward to reading more books in this series! I was given this free review copy audiobook at my request and have voluntarily left this review.

Simply, but elegantly, written with good, natural dialogue, this is an easy book to be drawn into and provides an intriguing murder mystery. Slight, teenage Jon is accused of the murder of his foster mother whose body was found in a dumpster, hog tied by his belt. He's an awkward, angry young man declaring his innocence to his attorney, Brian, but refusing to tell his story either in full or truthfully. So, if not Jon, who did kill the woman? The list of likely possibles is very short and Jon's poor anger management makes him a very likely candidate. But something about that very anger convinces Brian of the child's innocence. At the same time, other disturbing ripples from his office manager's past continue to disturb their joint feelings of security...

Narration by Brett Leach was nicely paired with the text. His reading was well paced, with good intonation and clear individual voicings for all of the characters. Each of the chapters, apart from those dealing directly with the trial proceedings, gives the first person present point of view from one of the main characters - Brian, Jon or the secretary-cum-friend, Lena, and through their own observations, the reader is given not just the ongoing situation as they see it, but also reveals much about the past of each person. And there is a lot of past - including another unresolved murder. It is a clever construct which really keeps the book interesting.

Overall, this was a very enjoyable book, and I must give my thanks to the rights holder of Child of Sorrow, who, at my request freely gifted me with a complimentary copy via Audiobook Boom. But although a good read throughout the main body, the concluding section was a disappointment and really felt unrealistically trite. Perhaps, because this is book three but the first that I have read of an ongoing series, part of the ending just didn't make sense to me and I might just go back to book two to find out what went before. So, four stars instead of five, but still a book I would recommend to those who enjoy legal mysteries.