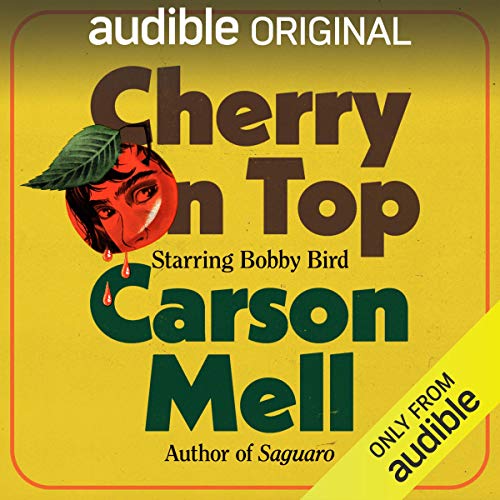 Sometimes recording an album is easy for Bobby Bird, and sometimes it's hard. But never has it been harder than the time he recorded "Cherry on Top."

Carson Mell's first novel, Saguaro, chronicled rock legend's Bobby Bird's entire life, save for the period when the rock star was at the peak of his fame, a period that caused Bobby too much shame and embarrassment to illuminate. In Cherry on Top, Bobby Bird shines a light on one of those hilarious and harrowing years when the world was Bobby's oyster and he was absolutely out of control.

After an affair with a taken woman leads to a blood-drenched and thoroughly incriminating evening, Bobby is whisked away by the all-powerful Colony Records to their "Safe House Seven" in the middle of the Mojave Desert. As he struggles to meet the record label's demands to record a new album and a hit single, he is thrown into a life or death battle with a homicidal record producer, giant lizards, and, perhaps most of all, himself.

In Cherry On Top, Bobby tells his story in his own words and - taking full advantage of the audiobook format - in his own songs.

What listeners say about Cherry on Top

It was great to hear from Bobby again. Check out Cherry if you’re a fan of Saguaro or new to Bird’s world. Mell blends story and song seamlessly. I loved it.

This might be my favorite book. Ever.
Carson is hilarious as Bobby Bird, and the music a really great accompaniment to the story. Bravo.

Now let’s get the movie.

Found myself dozing off.It is narrated in a monotone on a subject I am not interested in. Thought it would be a fun read. Oh well, live and learn.

I've been reading this dude forever and he only ge

Ts better. Carson Mell is the best. Remember to protect yourself at all times. Penile injury can happen to anyone and requires emergency medical attention. If you or a loved one suffer a penile injury contact your local emergency services.

Another gem from Carson Mell

I first discovered Carson Mell through an interview in the little known (but great!) SAVAGE KICK LITERARY MAGAZINE #7. It turned out Mell had been a writer on HBO's SILICON VALLEY - and was often the main writer the best episodes - and so I went on to buy his novels SAGUARO and BLUE BOURBON ORCHESTRA. It's hard to understand why Mell isn't better known. He's a master of his craft. His descriptions are concise yet hilarious and the raucous, aging and self-confessed "ugly" Bobby Bird is as enduring a character as Echo Johnson in his TARANTULA work. CHERRY ON TOP meets the same high level... a novella sized slice of Bird's life acted out by Mell. It was an absolute joy.