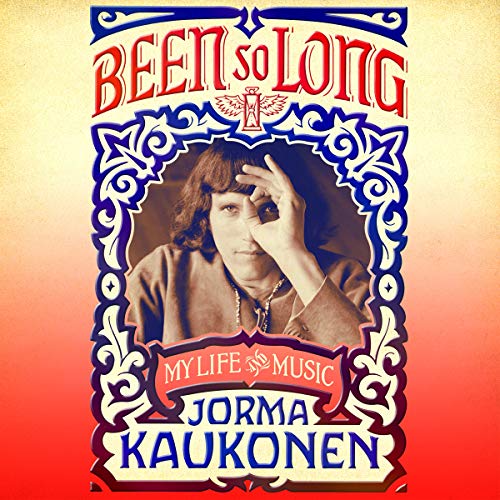 From the man who made a name for himself as a founding member and lead guitarist of Jefferson Airplane comes a memoir that offers a rare glimpse into the heart and soul of a musical genius - and a vivid journey through the psychedelic era in America.

“Music is the reward for being alive”, writes Jorma Kaukonen in this candid and emotional account of his life and work. “It stirs memory in a singular way that is unmatched.” In a career that has already spanned a half-century - one that has earned him induction into the Rock & Roll Hall of Fame and a Grammy Lifetime Achievement Award, among other honors - Jorma is best known for his legendary bands Jefferson Airplane and the still-touring Hot Tuna. But before he won worldwide recognition he was just a young man with a passion and a dream.

Been So Long is the story of how Jorma found his place in the world of music and beyond. The grandson of Finnish and Russian-Jewish immigrants whose formative years were spent abroad with his American-born diplomat father, Jorma channeled his life experiences - from his coming-of-age in Pakistan and the Philippines to his early gigs with Jack Casady in D.C. to his jam sessions in San Francisco with Jerry Garcia, Janis Joplin, Bob Dylan, and other contemporaries - into his art in unique and revelatory ways.

Been So Long charts not only Jorma’s association with the bands that made him famous but goes into never-before-told details about his addiction and recovery, his troubled first marriage and still-thriving second, and more. Interspersed with diary entries, personal correspondence, and song lyrics, this memoir is as unforgettable and inspiring as Jorma’s music itself.

PLEASE NOTE: When you purchase this title, an accompanying PDF will be available in your Audible Library along with the audio.

What listeners say about Been So Long

The memoirs of Jorma Kaukonen, best known (and in the Rock and Roll Hall of Fame) as a founding member and lead guitarist of the Jefferson Airplane -- he is responsible for the haunting intro to White Rabbit and the searing solo that ends Somebody to Love. Better known to his fans and students as one of the greatest guitar players ever, especially fingerstyle.

This is not an anecdotal collection of war stories and name dropping (although he has the photos and audio tape to prove that he backed up Janis Joplin as early as 1962). This is a candid, heartfelt, personal story about Jorma's personal life from his childhood through his days of fame and fortune in the 60s with the Airplane through the ups and downs of the ensuing decades to his current state of content as a family man, teacher, and touring performer, and how it all affected his guitar playing, music, and songwriting. I was lucky enough to get an advance reading copy from Net Galley, so you can read my full review (if you are so inclined) at Good Reads or Amazon.

What is most important for this particular review is, why would you listen to the audio version rather than (or as in my case in addition to) the print edition. Easy: Jorma narrates it himself. I've been a student of his at Fur Peace Ranch for the past number of years, have gotten to know him a bit, which you may read as a disclaimer, but it does put me in position to tell you that this IS Jorma -- this is how he tells it, this is true to life. Not only did he write it all himself (no ghost writer), he wrote it in his natural voice, and that comes through to perfection in audio.

When I read the print version, it felt a little jarring to see the phrases that punctuate his sentences, paragraphs, passages -- "so be it" or "you can't make this stuff up" and the like. I know that's how he speaks, but in print, it was strange to see. In audio, it's perfect. That's who he is, he's a song writer, and his little aphorisms are a rhetorical device, a lyrical device, a form of punctuation, a refrain in his storytelling, vocal rhythm and structure. It really works, better than reading it.

But whether you find that endearing (as I do) or a bit jarring (as I did in print), the most important thing is the depth of this memoir, whether you're a fan looking for insight into the music and musician that you love, or someone interested in the artistic process, how personal life and inner feeling translate into (in this case) music and lyrics -- many of Jorma's songs are described individually in detail. And five songs come with it as a bonus at the end of the audiobook. Certainly great stuff for Jorma's fans, but also illuminating listening for anyone interested in music.

If you’re a fan this audio will delight and fulfill you, there is something in this for everyone, for sure.

It’s like having Jorma sitting in your living room regaling you with tale after tale. But more than that the man shares his humanity in as honest a way I have never heard, his triumphs, and short comings are splayed out as neither boast nor confession, but simply as they unfolded.

Thank you for sharing.

Great Book, But Could Have Used Different Reader

I'm part way into this book, and I'm enjoying it. I'm a huge Jorma/Hot Tuna fan, and wouldn't miss this for the world.

That said, I'm ambivalent about Jorma as the reader. I recognize the value of having him read his own autobiography. But he is not a great reader - he reads too fast, in my opinion, and it detracts from the audiobook.

So, highly recommend the book, but think it could have benefited from a better reader.

I've been a fan of Hot Tuna for many years, so I guess my opinion is a bit biased, but I enjoyed Jorma's memoirs. I've always thought that the pairing of Jorma Kaukonen and Jack Casady was one of the best in music. I enjoy their work, whether listening to a CD, a live recording, or occasionally at a concert.

This book chronicles his life, music and otherwise. Jorma admits that he's made some mistakes in his life, and details what he's done to try and change his life since then.

He combines some of his own dated journal entries with his thoughts at the time of the writing of the book and even song lyrics that relate to that time.

He chronicles the story of the Fur Peace Ranch, from it's initial vision through the various milestones in its existence. Jorma loves the ranch, where young musicians are taught the fundamentals of playing and writing songs.

Overall, it's a story of a man living his life, making mistakes, learning from his mistakes, and eventually changing his life for the better and finding his own inner peace.

Jorma-Thanks for you music, and now for your book as well!

Loved hearing Jorma tell his story. Fantastic job and am so glad I listened as opposed to reading. Jorma does an incredible job narrating

Jorma is so cool

I’ve always been a huge Jorma Kaukonen fan but found there to be very little information about his life. This book gives all the details! I have learned so much about his fascinating career and life. Can’t recommend enough: 11/10!!

What a journey, thank you Jorma

To step inside a musician's life from the beginning is a chance to know the struggles,the triumphs .Along with the passion to express himself as human and love he has for his passion of producing and performing great music.

Because of this book, I am now a big fan of Jorma's. I am also getting into Hot Tuna.Great music

Been To Long Coming

This book is well written, the stories flow in order or the early years of his childhood to The Airplane,Hot Tuna,Vital Parts to his solo career .Jorma does this without beating down anyone around him. Well Done!
For me Jorma has been my favorite guitarist songwriter for 42 years and counting.
add author.
Love this book.
Great bonus music with the book.

please get a pro to read

sorry Jorma has a great story and is obviously an intelligent guy but his voice is terribly distracting. I grew weary of listening to his speaking.... he simply is not suited at all for audio books and would never qualify as a professional voice guy
let a pro or simply someone who sounds better and easier on the ears read your book. I couldnt finish it for this reason