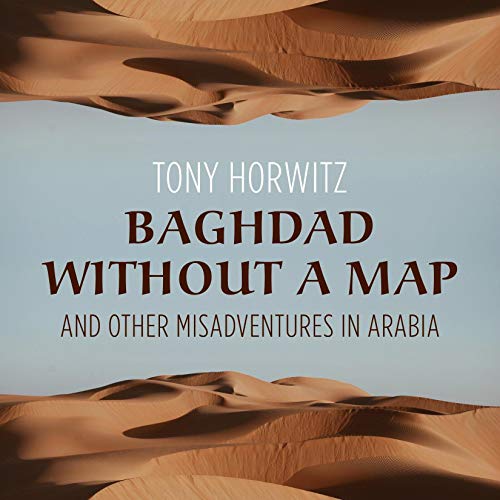 Baghdad Without a Map and Other Misadventures in Arabia

By: Tony Horwitz
Narrated by: Nathaniel Brooks Horwitz
Try for $0.00

“A very funny and frequently insightful look at the world’s most combustible region.” (The New York Times Book Review)

Pulitzer Prize-winning journalist Tony Horwitz's 1991 classic account of his travels across the Middle East and through the Arabian Peninsula, now in audiobook for the first time.

With razor-sharp wit and insight, intrepid journalist Tony Horwitz gets beyond solemn newspaper headlines and romantic myths of the 1990s to offer startling, honest close-ups of the Middle East. His quest for hot stories takes him from the tribal wilds of Yemen to the shell-pocked shores of Lebanon; from the sands of the Sudan to the souks of Saddam Hussein's Iraq.

Careening through 14 countries, including the Sudan, Iraq, Israel, and Afghanistan, Horwitz travels light, packing a keen eye, a wicked sense of humor, and chutzpah in overwhelming measure. This wild and comic tale of misadventure reports on a fascinating world in which the ancient and the modern collide.

“As a document of the cultural impasse that brought on the war, this is unsurpassed.” (Village Voice)

“High-spirited and entertaining.” (The New Yorker)

“A timely and incisive insider’s description of the mysterious Arab world...Tony Horwitz is an ideal guide for American reader[s].” (Chicago Tribune)