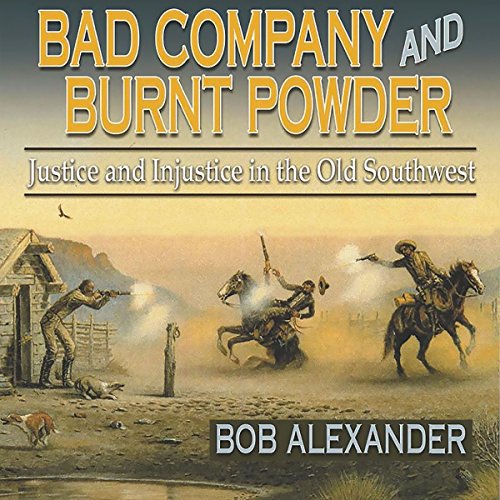 By: Bob Alexander
Narrated by: John Burlinson
Try for $0.00

Within this audiobook, the listener will meet a 19-year-old Texas Ranger figuratively dying to shoot his gun. He does get to shoot at people, but soon realizes what he thought was a bargain, exacted a steep price. Another tale is of an old-school cowman who shut down illicit traffic in stolen livestock that had existed for years on the Llano Estacado. He was tough, salty, and had no quarter for cow thieves, or sympathy for any mealy-mouthed politicians. He cleaned house, maybe not too nicely, but he was unarguably successful. Then there is the tale of an accomplished and unbeaten fugitive, well known and identified for murder of a Texas peace officer. But the Texas Rangers couldn't find him. County sheriffs wouldn't hold him. Slipping away from bounty hunters, he hit Owlhoot Trail.

This audiobook is published by University of North Texas Press.

What listeners say about Bad Company and Burnt Powder

Skip this book unless you are such a Western history fan that all writing on the subject entertains you. Such people exist, and more power to them. If you are somewhat critical of what you read or listen to, know that neither the writer nor narrator of this particular book are up to snuff. I lasted through the (verbose) Introduction, on to the end of Chapter Two, before calling it quits. Mr. Alexander writes for a Wild West magazine and has in-depth knowledge of the 19th century Southwest. He’s found interesting, lesser-known events in Texas, Arizona, Colorado and New Mexico from those times, but his writing is indistinct and wandering. It’s often difficult to follow a line of thought as he weaves in and out of what he is discussing. He writes in a homey, folksy style, then waxes philosophical using three-syllable words (to reveal his education?), then back to homey again. As he meanders he adds asides which further blunt his focus. Listeners cannot ask authors to get back on the subject. We are stuck with their chapters . . . in this case obfuscated by secondary details and digressions. Worsening the book’s fuzzy writing is narration by John Burlinson—a flat, inflection-less delivery with a tinge of the Southwest, making already vague threads of thought even easier to lose track of. Mr. Burlinson has a number of previous narrations listed and thus this sub-par performance comes as a surprise.