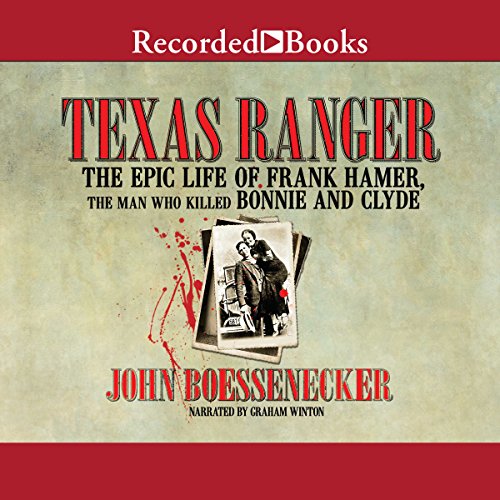 By: John Boessenecker
Narrated by: Graham Winton
Try for $0.00

To most Americans, Frank Hamer is known only as the villain of the 1967 film Bonnie and Clyde. Now, in Texas Ranger, historian John Boessenecker sets out to restore Hamer's good name and prove that he was in fact a classic American hero.

From the horseback days of the Old West through the gangster days of the 1930s, Hamer stood on the front lines of some of the most important and exciting periods in American history. He participated in the Bandit War of 1915, survived the climactic gunfight in the last blood feud of the Old West, battled the Mexican Revolution's spillover across the border, protected African Americans from lynch mobs and the Ku Klux Klan, and ran down gangsters, bootleggers, and Communists. When at last his career came to an end, it was only when he ran up against another legendary Texan: Lyndon B. Johnson.

Written by one of the most acclaimed historians of the Old West, Texas Ranger is the first biography to tell the full story of this near-mythic lawman.

What listeners say about Texas Ranger

Great History of a Forgotten

but remarkable man. No need to look for a cinematic Clint Eastwood as Frank Hamer was clearly the real deal. Boessenecker tells a great story, but mars the overall presentation with incessant value judgements regarding race, politics and personality...the most egregious example terming Hamer’s failure to prevent Lyndon Johnson’s theft of the 1948 Senate Race as his “greatest success.” Really? He would do better to leave those fragments of Divine Augury in the pundit pile. Finally, although the narrator did a good enough job, with fully half my family from the Lone Star State, I didn’t recognize a credible Texas inflection in the entire reading. Those tepid criticisms aside, this is a very worthwhile book about a lawman with honor, integrity and a determination to be fair to all people - regardless of race - as it demonstrates Andrew Jackson’s maxim “one man with courage constitutes a majority.

John Boessenecker's book "Texas Ranger" does a very fair and relatively unbiased look into the life of Frank Hamer. And his work with the Texas Rangers was long and extensive. And most definitely Hamer was a part of some very controversial happenings along the border of Texas and Mexico. And he's FAR more than the man who took down Bonnie and Clyde. That was just one happening in his career.

However, one thing that the author does, and most historians do today, is practically prostrate themselves on the altar of apologies for everything not being politically correct during 19th-20th century, and earlier. Boessenecker isn't as bad as some, who just cannot apologize enough for the past. Why a historian can't just tell the story, without bias, and as it happened, is beyond me. So, if that had happened here this book would have 5 stars.

Graham Winton does a great job narrating here, and the reader can just picture the man that was Frank Hamer.

What a great book about an American hero and the transition as a lawman into the 20th century. Why haven't a heard about this guy? Though he wasn't perfect, he had a high sense of duty and morals. As a lawman, he sacrificed a lot and was unselfish. Maybe the reason we haven't heard of him is that he wasn't a self promoter and didn't like the limelight and couldn't stand the press. Great historical book. Great narration.

I love Frank Hamer, but Boessenecker's left leaning bias is a little too much for a good biography.

I only had a few issues

I loved the book and the narration wasn't bad, but there were a few things that did annoy me. The author is not from Texas and it shows. There were many instances where the author referred to Texas towns (like Bryan) as being in East Texas. Bryan is not in East Texas. Houston is not in East Texas. I know those are little details, but they're simple details that could be gained by just looking at a map or asking any Texan in the area. Aside from that, I really did enjoy the book.

I owe a debt to John Bosseneker for bringing to light some very interesting characters in the American West who are not widely known. His book Texas Ranger is about the man who brought an end to Bonnie and Clyde. Bosseneker’s book Texas Ranger tells the story of Frank Hamer, one of the most effective and deadliest lawman in American History. The surprising thing about Texas Ranger is Frank Hamer’s stopping Bonnie and Clyde is actually a minor episode in his life. Hamer’s saga as a border lawman and force of nature is unprecedented. I consider myself a student of the West and yet I had never heard of Hamer, outside of the 70’s movie about Bonnie and Clyde. Bosseneker’s gift is to dig out the story of these little known, yet exceptionally interesting men and tell their story in a historically accurate yet easy to read manner. If you like Western History or just love a hell of a story listen or read Bosseneker’s books about such men as Tiburcio Vasquez, Bob Paul and Frank Hamer. Fictional characters pale in comparison to the exploits of the men Bosseneker unearths and writes about. Bosseneker, a former lawman himself, loves the West and that comes across in his books.

This book was a great and exciting ride especially being that I’m from east Texas!!! Frank was a True TEXAS Hero just as much a Wyatt Earp in my opinion. Get this book, you will not be disappointed!!!

Not only did I learn more about the great Texas Ranger but I also leaned a bunch more of history fact that I was unaware of that the Tradition started so far back or the reasoning /meaning of some historical facts. Highly Recommended

Wonderfully written and great story. Kept me interested through the entire book. Not one dull moment

Both exciting and thoughtful

A biography of LBJ motivated to read this book.

Frank Hamer would be an almost unbelievable character in fiction. But he was real man and a real hero. This book presents him thoughtfully and fairly. His faults are not glossed over, his accomplishments not smeared with adulation. There are plenty of shoot outs because that was a regular thing in his life and times. There are heart-thumping episodes throughout the book. And then there is the narrative of Hamer’s character carried throughout the book.