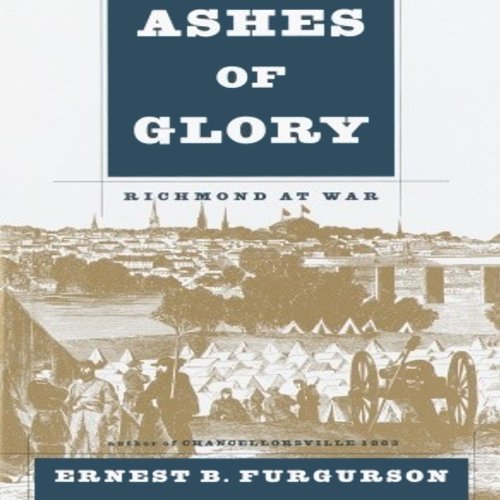 By: Ernest B. Furgurson
Narrated by: Joel Richards
Try for $0.00

On the day the first shots of the Civil War were fired, a mob in Richmond clambered on top of the Capitol to raise the Confederate flag. Four years later, another flag was raised in its place while the city burned below. A 13-year-old girl compared the stars and stripes to "so many bloody gashes". This richly detailed, absorbing book brings to life the years in which Richmond was the symbol of Southern independence and the theater for a drama as splendid, sordid, and tragic as the war itself. Drawing on an array of archival sources, Ashes of Glory portrays Richmond's passion through the voices of soldiers and statesmen, preachers and prostitutes, slaves and slavers. Masterfully orchestrated and finely rendered, the result is a passionate and compelling work of social history.

What listeners say about Ashes of Glory

Enjoyed the history very much

Being from Richmond it was interesting to learn the history of places often visits. Very well written and narrated. Highly recommend to a history buff.

Goes over lots of info that has been covered in Jefferson Davis and Robert E Lee books. Very intriguing

Lots of good information , unfortunately with audio books one never has a chance to follow-up and study the references. Nonetheless, I appreciate the time and effort of the author.

It would not be fair of me to heavily critique this book in the negative because I only made it to the third chapter and then skim through the rest. Nothing personal mind you but the narrators voice reminds me of one I heard while sitting in a seventh grade driver Ed classroom — the scare movie: Mechanized Death. It was scary enough. The narrators voice – – polite state trooper with a background in broadcasting— made a sloppy story intolerable. Here stands “Ashes of Glory.

Ps I also noticed skimming chapter beginnings that that there were many wonderful things done by blacks and for blacks, and in inuendo, that everybody really got along just fine. There was a great deal of hatred in the CW books and documents I have read …. North and South (but particularly and uniquely South as toward blacks

The view from the time

It's the view of the war from the streets of Richmond. The people would sooner give up their family and friends than their property. We'll never know exactly how many supported the war and how many were simply carried along. Too often we impose our own views on the past but we must hear the voices of those who lived then and there.

told through the voices of the common men and women of the time. little of the bluster of the giants of the period.