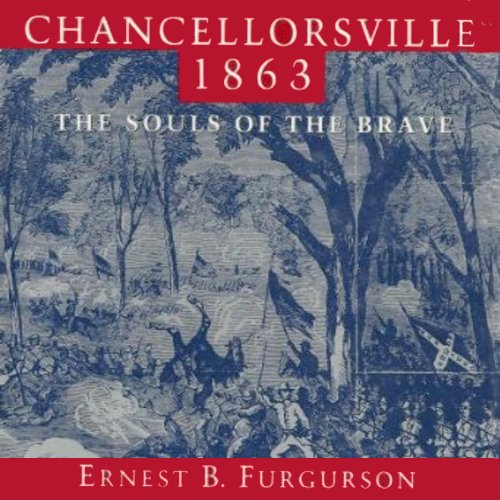 By: Ernest B. Furgurson
Narrated by: Joel Richards
Try for $0.00

For 130 years historians and military strategists have been obsessed by the battle of Chancellorsville. It began with an audaciously planned stroke by Union general Joe Hooker as he sent his army across the Rappahannock River and around Robert E. Lee's lines. It ended with that same army fleeing back in near total disarray - and Hooker's reputation in ruins.

This splendid account of Chancellorsville - the first in more than 35 years - explains Lee's most brilliant victory even as it places the battle within the larger canvas of the Civil War. Drawing on a wealth of first-hand sources, it creates a novelistic chronicle of tactics and characters while it retraces every thrust and parry of the two armies and the fateful decisions of their commanders, from Hooker's glaring display of moral weakness to the inspired risk-taking of Lee and Stonewall Jackson, who was mortally wounded by friendly fire. At once impassioned and gracefully balanced, Chancellorsville 1863 is a grand achievement in Civil War history.

What listeners say about Chancellorsville 1863

The story is a one of competent leadership and endurance of soldiers in both sides.

Overall: This book is an accurate, highly-entertaining account of one of the great battles of the Civil War. It presents a combination of broad sweep, major details, and a great many first-person accounts. The author description of the battlefield is comprehensible

Performance: The narrator is expert. His tempo and his articulation are perfect. I quibble withm his pronunciation of a couple of names, which is the audiobook’s only flaw.

A definitive account of the battle and one of the most concise overviews of the war up to 1863.
Ferguson’s experience in the Marine Corps is clearly illustrated extrapolating the military genius of the battle. However, he still is able to deliver a history filled with outstanding eyewitness accounts that give the work a depth not found in other scholarly works.
And incredible book that I highly recommend.

This is the story of an incredible battle, and an incredibly complicated battle, told about as clearly as I suspect it can be told. The reader does a fine job, but for me the lesson here was that there are some books that are better read then heard. For instance, to listen to the story without the maps in front of you means that your understanding of what's actually happening is impressionistic. And there are times when one wants to simply stop and reread, yes, you can re-listen, but I don't think it's quite the same. So I'd say if you want to get the jist of what happened at Chancellorsville this is excellent. If you want more, read the book.

This is an good listen, it covers the campaign and battle of Chancellorsville, in language that anyone can understand, I Recommend this audio book!