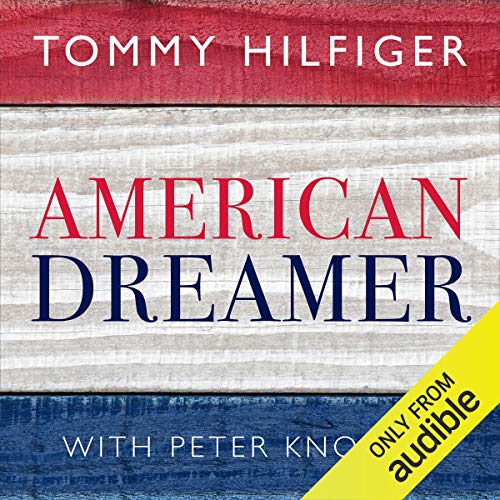 By: Peter Knobler,Tommy Hilfiger
Narrated by: Kevin Free
Try for $0.00

In this tale of grit and glamour, setbacks and comebacks, business and pop culture icon Tommy Hilfiger shares his extraordinary life story for the first time.

Few designers have stayed on top of changing trends the way Tommy Hilfiger has. Fewer still have left such an indelible mark on global culture. Since designing his first collection of "classics with a twist" three decades ago, Tommy Hilfiger has been synonymous with all-American style - but his destiny wasn't always so clear. Growing up one of nine children in a working-class family in Elmira, New York, Tommy suffered from dyslexia, flunked sophomore year of high school, and found himself constantly at odds with his father. Nevertheless, this self-described dreamer had a vision and the relentless will to make it a reality. At 18 he opened his own clothing store, parlaying his uncanny instinct for style into a budding career as a fashion designer. Through decades of triumph and turmoil, Tommy remained doggedly optimistic. To this day his approach to commerce is rooted in his positive view of the world.

American Dreamer brims with anecdotes that cover Tommy's years as a club kid and scrappy entrepreneur in 1970s New York as well as unique insights into the exclusive A-list personalities with whom he's collaborated and interacted, from Mick Jagger and David Bowie to Ralph Lauren and Calvin Klein. But this is more than just a fashion icon's memoir - it's a road map for building a brand, both professionally and personally. Tommy takes us behind the scenes of every decision - and every mistake - he's ever made, offering advice on leadership, business, team-building, and creativity. This is the story of a true American original, told for the first time in his own words, with honesty, humor, and the insatiable appetite for life and style that proves that sometimes you have to dream big to make it big.

"A unique look into the fashion world... an honest, straightforward, mostly entertaining autobiography of the man who created a classic yet hip line of clothing." ( Kirkus Reviews)
"Fashionistas and business gurus alike will glean important lessons from Hilfiger's rags-to-riches rag-trade story." ( Booklist)
"Tommy burst onto the fashion scene at the height of hip-hop and was instantly taken up by rappers and rockers alike. Since then, year after year he has been ahead of the curve with his elegant and stylish looks. His creative energy has always been an inspiration to me. He's really himself in American Dreamer." (Mick Jagger)

What listeners say about American Dreamer

This book has several parts, each distinct and some better than others, as follows:

Chapters 1 - 10
This is by far the best part of the book, because it's captivating, inspiring and one learns a lot about fashion and the business of fashion. I loved, loved these chapters.

Chapters 11 - 16
This is about Hilfiger going beyond the brand and the company, making himself the special thing. He went out of his way to be with celebrities and their families, to make sure corporate profits were beyond the reach of the U.S. government, and to capture the hip-hop and street markets.

Chapters 17 - 19
Hilfiger's business suffered when Spike Lee went after him on race, and he suffered personally. But he had also apparently become quite arrogant, and his business partners left him, and marriage ended. The business went downhill pretty fast. However, TARP (Troubled Asset Relief Program) and other federal programs saved the day, and they saved Tommy big time.

Chapter 20
Hilfiger finds new love, and a lot of it has to do with celebrity and fame. One gets to see the concerns of the celebrity when it comes to dating and marriage, and it's a revelation to say the least.

Chapters 21 - 23
This last section of the book is about politics. Hilfiger had brought in a CEO to cut costs by cutting jobs and divisions. Then when that work was done, Hilfiger had to distance himself from the cost-cutting. Hilfiger attempts to position himself favorably in many ways for legacy purposes, and while one feels the need to throw up, it's all instructive in unintended ways.

One completes the book grateful for the education in fashion, and wiser in a few ways.

This book was absolutely amazing and inspiring.
I couldn't put it down.
I ended up trying to google photos and read articles and actually live myself in the moment.
I now have so much respect and regard for the Tommy Hilfiger brand.
I love hearing how through all his trials and error, he built himself up again.
Always improving no matter what the obstacle was.
I am so motivated to start making my own way into the fashion industry.
This book I will always keep at hand.
It truly inspires me to hear that great people are able to achieve whatever they set out to do, and never let things such as collage or finances hold them back.
Thank you so much for writing this book.

nothing is easy and keep your circle small and be open to new ideas but don't forget your own, only do what feels right even when it doesn't seem right. that's what I got from this.

One of the Greats

This is one of the best and most interesting stories about the business of fashion you will ever read.

Very well written and narrated. Excellent business book! For business owners who have made it but are facing new challenges, this a must read for them. It explains the different paths and angles you can take to become even more successful. A positive read!

This was a very interesting story of a person turning their insecurities & interests/passions into life long success.

Much respect for Tommy

Highly recommend this book if you’re into fashion, business & retail. Or just interested in how Tommy Hilfiger turned his dreams into millions.

The book was a bit slow in the beginning but hang in there. Tommy Hilfiger is an American Dream success story. I would recommend for any young professional. Success doesn't come without failure. Stay true to your vision.

Great story and words of wisdom for designers!

Really enjoyed this book and all of the ups and downs of Tommy's career as a designer!

I'm still torn on where the blame for this should fall. The performance was bland and mundane, lacking any real emotion or passion. It was just hard to listen to. However, he didn't have much to work with. The biography itself is self gratuitous and nauseating, and at times bizarre. For example, the author glossed over, and rushed through, the account of his father's death, but offered detailed accounts of his upscale real estate transactions, and the time he hung out at the beach with Mick Jagger and David Bowie. I never felt a connection to the author and at times felt myself disliking him. I respect Tommy Hilfiger for all that he's achieved. He's a great American success story of rags to riches, which is why I chose this book to listen to. Unfortunately it fails to deliver in any meaningful way.