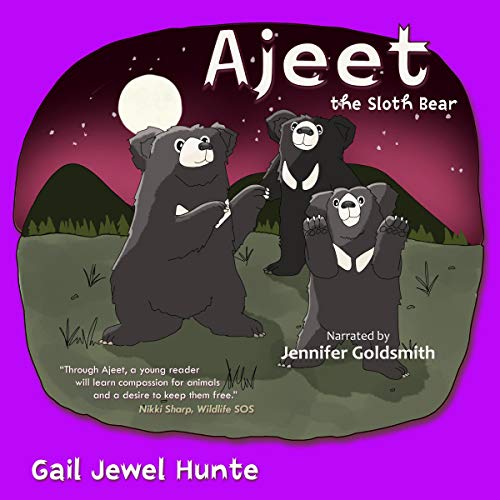 By: Gail Jewel Hunte
Narrated by: Jennifer Goldsmith
Try for $0.00

Ajeet the sloth bear had been awake for hours, eating his fill of ants and termites. His tummy was full, but he used his strong paws to shake the mango tree until a few came tumbling down anyway.

His sister, playing in the grass, called to him. “Ajeet, come and play with me before Mamma Bear calls us back to the cave,” she shouted.

Ajeet peeked through the bushes, and then stopped. Who were those strange men? Before he knew it, the little sloth bear had been taken far away, where he would soon learn his fate....

Inspired by the conservation work of Wildlife SOS in India, Ajeet the Sloth Bear tells the story of a young bear who is captured and forced to dance for entertainment.

Ajeet is afraid of humans, but he senses kindness in a little boy named Ravi. The bear begins to feel hope again as he realizes Ravi wants to set him free. Could he get back to the family and life he longs for? Find out in Ajeet the Sloth Bear, by Gail Jewel Hunte. For ages seven and up.

What listeners say about Ajeet the Sloth Bear