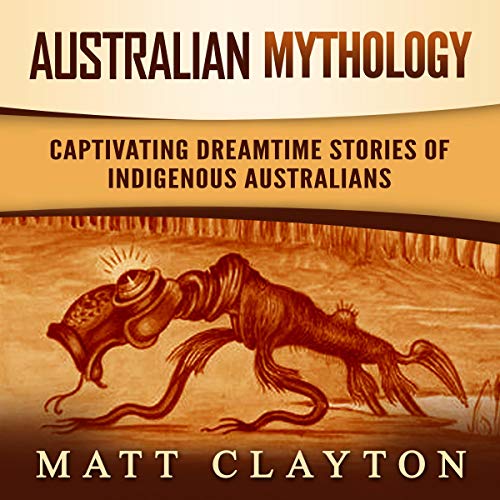 By: Matt Clayton
Narrated by: Mike Reaves
Try for $0.00

If you're looking for a captivating collection of Australian myths, then pay attention....

With a history reaching back over 40,000 years, Indigenous Australian culture is one of the oldest continually existing cultures in the world. According to DNA tests conducted at the University of Copenhagen, Indigenous Australian people are the descendants of the first migrants to have left the birthplace of humanity in Africa, some 75,000 years ago. Across these many millennia, the Indigenous peoples of Australia have established complex and unique societies that have adapted well to the often harsh conditions of the Australian landscape.

Although Indigenous Australian culture tends to be named as though it were a single unit, it is far from monolithic. According to the Australian government’s website, at the time of first contact with Europeans, there were some 500 distinct Indigenous nations inhabiting Australia, speaking different languages and following their own religious and cultural practices, with a certain amount of overlap across cultures.

Australian Mythology: Captivating Dreamtime Stories of Indigenous Australians invites you to go on a startling journey and discover:

So if you want a captivating collection of Australian myths, click the “Add to Cart” button!

What listeners say about Australian Mythology

So informative! I've been searching everywhere for a detailed collection of the gods and this was perfect. Still listening, but good so far!

I have been studying Australian Mythology for many years and I am always looking for new Audiobooks on the subject. I found this Audiobook to be very informative and accurate. It is also very easy to follow for those just learning about the subject

I have not finished listening to it all yet but I love this Audiobook! You can start from the beginning and listen about all those characters or you can choose your favorite characters from the index and just learn about them

Some prior basic knowledge of Australian mythology is suggested though. If you have little to no knowledge on the subject, you will still find this Audiobook very useful

If you are looking for an enjoyable audible

If you are looking for an enjoyable audible about Australian Mythology, I highly suggest this audiobook. It is rather short, but with lots of knowledge packed into it.

I would suggest it to anyone

I would suggest it to anyone who requires to be aware of the Gods and Goddesses of Australian Mythology.

If anyone has an interest in Australian Mythology

If anyone has an interest in Australian Mythology they cannot do better than buy this audiobook. Full marks to the author for his analysis.

What is with the voice

Australian mythology spoken by what sounds like an American robot. They couldn’t get one indigenous Australian to read their own mythology? Or even just an Australian?

The stories are great, but so many simple words are mispronounced. Such a shame. I would have preferred to have read the book myself.

This audiobook was exactly what my husband wanted.

This audiobook was exactly what my husband wanted. Some idea of who is who and who belongs to who in the world of gods and men- or more often women. It is hard to believe that anyone could believe such a way out nonsense.

Fantastic Audiobook. accurately what I required and gives clear info on the Gods and their connections to each other

A very interesting listen. I was happy to find this because my audible store doesn’t have a lot of audibles like this. Thank you so much!

I enjoyed this audible on Australian Mythology. I found these tales from Australia very interesting. I didn't know anything about the Myths of Australia.

This listen gives information that is not taught in school and you might not know. It is informative and is an easy listen also.

A very neat approach to three different cultures & their beliefs. All major civilizations have myths, beliefs.

Great listening & information on Native Australians. Many of the stories are similar but, yet still different.

I liked the variety of Myths included. I liked the way the stories are divided into sections. I will be looking for more!

We forget how rich native Australian culture is, also we forget that myths tell of their world view. This is a wonderful listen. The bibliography opens a wider door for more.

This listen gives information that is not taught in school and you might not know. It is informative and is an easy listen also.

Fantastic listening. As an anthropology major culture interests me. This audible has a manner in which a listener may easily close one's eyes and see the dynamic aspects of this deep and ancient culture.

couldn't get passed the intro

the American voice over artist wasn't really the right choice to read this audio book. would love to have it re done with an Australian reading it.

Interesting collection of stories, but the narration is oh so slow and a little dumbed down. Listen on a faster speed to improve the effect.

Why an American narrating?

A fairly superficial treatment of our indigenous mythology in an American accent.
Plenty of room for improvement.

I moved to Australia almost 8 years. During those years I’d rarely exposed to aboriginal people and particularly to their culture and mythology. This book taught me a great deal about them and filled the void. While the book does not put a contrast between their mythology and others (e.g. Greek mythology), one can make that contrast and learn even more. I also learned good stories to tell such as why you mustn’t imitate kookaburra, or why wombats have flat faces and kangaroos long tail. The narrator’s style was not my favorite but still pretty good to listen to.

The narrator has a strong American accent and mispronounces every Australian name, place name and animal.

mispronunciation of words and American accent is not good. It is not specific about culture, area or people that the story belongs to.

I was really looking forward to hearing these stories, but unfortunately it's narrated by an American. These stories should be narrated by a First Nation Australian or at least an Australian.
The guy can't even say Kookaburra properly.
I'd definitely listen if this was changed.