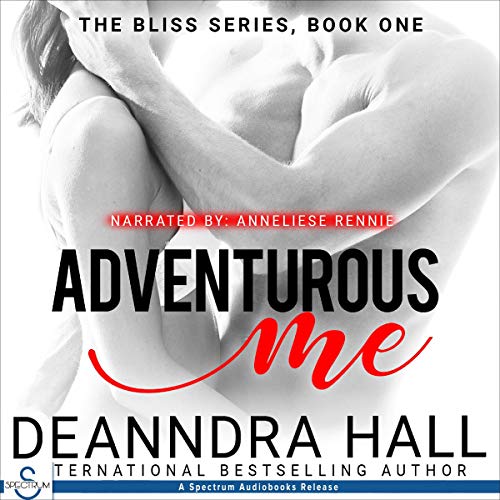 By: Deanndra Hall
Narrated by: Anneliese Rennie
Try for $0.00

When Trish's husband of almost 30 years announces that he's leaving her because she's "boring", she sets out to find an adventure. Her attempt to drink her heartbreak away drops her onto a handsome gentleman who invites her to have an adventure, and Trish can't help but say yes.

She embarks on that adventure, but her path keeps crossing with that of another - Clint Winstead, a Dominant at the club Bliss and the one person in the place who seems to despise her. And that's fine with Trish. After all, there are plenty of other Doms there who want to play.

But when an annual event at the club throws Trish and Clint together for two weeks, both of them are horrified, not by the pairing, but by the feelings they're trying hard to deny. As the time passes, it's harder and harder to deny what they know is true - that is, until one nearly-tragic incident that almost changes both their lives irreparably. And when Trish realizes that continuing on with her commitment could cost her the ultimate - her life - she knows that it has to end. But does it?

Trish is the queen of second chances. But this second chance might just come at a price too high to pay. A little adventure is a good thing, but perhaps she's gotten far more adventure than she can handle.

What listeners say about Adventurous Me

It seems strange for an almost 50 year old woman to become a submissive - but she did. I am not sure what to make of this book. For the most part, to me this book was just OK. Anneliese Rennie did an OK job with the narration. I received this free copy audiobook at my request and have voluntarily left this review.

The narration was good, although this would definitely be better as a dual narration.

I know that Clint is supposed to be the most trustworthy Dom, and we're supposed to like him as a main male character, but I just couldn't find him likeable.  He gets angry that Dave doesn't tell her about safewords, but he only asks her safeword AFTER starting anal play.  His primary goal should be to keep a careful eye on his sub and protect her, yet he fails to do so multiple times. His way of "teaching" her that Doms should barter her is really troublesome and completely careless. Later in the book, his excuses for not watching her (twice!) is ridiculous. This guy should not be a Dom, and most clubs would have him blackballed.

Things also seem to move too quickly for Trish, in my opinion.  She needed someone **she could trust** to first sit down with her and explain everything much better (or hell, allow her to do her own research first), rather than giving a 30 second intro, then getting her right into it.  Hell, she doesn't know the basic terminology (sub, bottom, etc.), which worries me for Trish.  During her playtimes, she seems to have feelings of anxiety and even trepidation.  To me, this makes me reconsider how fully consensual these relationships are and how prepared she really is for this (and perhaps that it all went too premature).

I love when books jump right into the story! Trish is coming out of a bad marriage and decides to work on herself for a change. She doesn’t even realize what jumping into a Dom/sub lifestyle will mean to her, but she enjoys the adventure. Will she find the man that will collar her? Loved her journey and the happy ever after.

if this is at all interesting to you get it...
the story was fun and entertaining, the smut turn me on HARD....

and Anneliese was amazing...
kind of afraid I will be turned on if I listen to something else by her going forward

Anneliese Rennie did an awesome job of portraying the emotions of these characters. She definitely knew how to bring the sex scenes to life. I could feel the heartache and denial that Clint was living with. She gave the characters distinctive voices and held my attention from the beginning to the end.

I highly recommend this Audible book. Just remember that these are flawed characters and mistakes will be made.

With this first in a series, Deanndra Hall brings us a walk down a slightly different path to fulfillment. Stuck in the aftermath of her divorce , Trish talked up an invitation which turns her world around
With intense experiences in this new world, she takes chances denied to her previously. I have to admit that it was a bit of a leap to accept her acceptance of very different behaviour, but I got it. I wasn't quite as convinced of Clint. Some of his behaviour is suspect to say the least and, in a world where trust is premium, I was unsure. However, I enjoyed the journey overall and Annaliese Rennie once again proved to be very listenable! 💖💖💖💖

Taking control of her life at 49!

I really wanted to like this but nope. This was my first book by this author but I'm willing to give another book a chance.

The narrator did a good job for what was given.

I enjoyed this book immensely, it is uniquely original story that grabbed my attention right from the start and captivated it straight to the end. It is my first book written by Deanndra Hall, she is a gifted author, the storylines and characters she created are realistic, easy to relate to and connect with. Trish was married close to 30 years when her husband decides to leave her, telling her she is boring. Instead of staying home and crying about it she goes out with a friend, while out she meets Dave, they start talking and he invites her to a club named Bliss. She goes and walks in to a world different than anything she knows, a world of kink and BDSM. She is intrigued by what she sees, a guy at the bar catches her eye too but he does not stay around to chat with her. Dave explains how things work in the club and agrees to train her to be a submissive until she finds a permanent Dom. This is the start of Trish’s BDSM adventure, an adventure where she learns things about herself and awakens a side to her she never knew she had. Things get even more adventurous when she gets paired with Clint, a Dom who she thinks hates her, for a two week home stay. She is not too thrilled about the pairing but Dave assures her it is a perfect match and she goes with it. Clint is a great Dom and Dave tells him he would be great for Trish. Clint is a long time member of Bliss but because of personal issues he has not had the easiest times. There is great chemistry between him but Clint seems to be holding back to maintain distance, all goes well until it doesn’t. I loved how everything plays out in this book, the story is nicely plotted, there is a great balance of drama, angst, kink and emotion. Clint has his reasons for holding back, events in his life hardened him and he built walls around his heart, so it turns out Trish is not the only one who needs to learn things, he does as well. Deanndra Hall thank you for the great story and emotional rollercoaster. It is a real treat to get to listen to a book where the lead female is in the prime of her life as well as the other characters.

🎧📚🎧 And for the wonderful narration, Anneliese Rennie is a talented and versatile voice artist. She does a fabulous job portraying the characters, humanizing them as she brings them to life, giving each their own voice and personality. I loved her take on Trish, she took the role and made it her own, completely grasping her persona as well as all her emotions which could be heard in her performance. She perfected the roles of the other characters as well, she made it easy to follow along and know who was who. She is an entertaining storyteller and a pleasure to listen to. Thank you for another great listen.

Adventurous Me is the perfect title for this story as Trish finds her new self. Being told she is boring by her soon to be ex-husband of 30 years, she stumbles upon Dave. Dave takes her under his wind and brings her to Bliss, the local BDSM club, and Trish begins her new journey to finding the real her. When given the chance to spend 2 weeks with a DOM, she takes it and is paired up with the one person who seems to hate her the most, Clint. But she takes on the challenge. Will this be the person to change her life? Clint is a tough character, and even with his back story, it was hard for me to warm up to him. While this relationship is difficult, I will tell you there are several things I loved about the book. I loved that it features a woman who is older, not perfect and she find her self confidence. This for me is everything! The story is steamy and adventurous and I loved her spunk and willingness to find her new self!

Anneliese Rennie brings the characters to life with a fantastic performance. She becomes Trish, and gives us her emotions on her sleeve. From the beginning, where she is put down to her ability to know her own worth, Rennie brings out the feelings with ease. She is talented, able to switch between characters with distinct voices and makes the book easy on the ears.