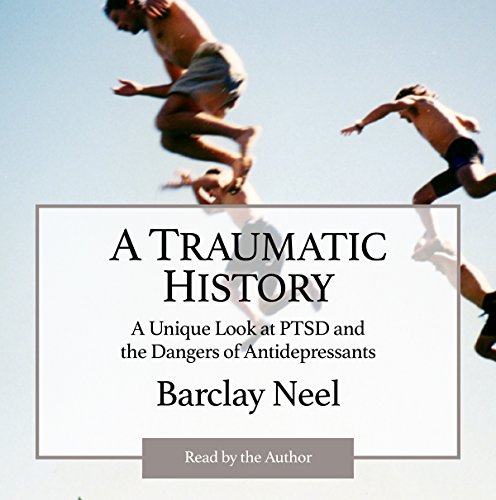 A Unique Look at PTSD and the Dangers of Antidepressants
By: Barclay L. Neel
Narrated by: Barclay L. Neel
Length: 8 hrs and 48 mins
Categories: Health & Wellness, Psychology & Mental Health
4 out of 5 stars 3.9 (7 ratings)

What comes to mind when you hear the term Post-Traumatic Stress Disorder or PTSD? Images of soldiers coming home from war with psychological scars from the battlefield? Or perhaps a woman who has survived a sexual assault and appears to be frozen in time from her harrowing event. But what exactly is this mercurial condition, and what do these two frequently cited examples have to do with one another?

PTSD, as the name suggests, is a stress disorder that follows a traumatic event or period of time where an individual is gripped by such terror and feelings of helplessness that it actually changes how their nervous system operates moving forward. This insidious, and far too often life-threatening disorder can arise from the aforementioned cases of war or sexual abuse, but it also can be set in motion by any and all other forms of psychological trauma.

A Traumatic History is a unique look into this disorder through the eyes of an individual who was in the process of becoming a psychotherapist when he had an adverse reaction to an antidepressant, or SSRI, after only being on the drug for one month. But it was the severe and unexpected withdrawal that followed (after being improperly weaned off of the medication) that eventually led this previously healthy and highly active person to a dramatic breakdown that gave rise to this debilitating disorder.

A Traumatic History is as much about a firsthand account into the darkness and despair of PTSD and the eventual journey back to health, as it is a cautionary tale about the dangerous practice of overprescribing psychiatric medications.

What listeners say about A Traumatic History

Enjoyable and helpful! Reads like a novel but offers keen insights to PTSD.

Though PTSD is a "heavy" topic, this book provides levity into the subject matter while telling an important story. It's a personal journey that's enjoyable to read due to the author's writing style - you find yourself immediately bought-in to the story from the first few sentences and suddenly you're now traveling alongside his travels, both literal and figurative. If you know anyone who's struggled with PTSD or you have yourself, this book also provides keen insights into the pilgrimage back to health and "normal" life. In the back it also offers a summary of key learnings and helpfully describes the symptoms of the disorder - a bit of a roadmap to understanding PTSD and trauma, providing or seeking support, and also some very important thoughts about anti-depressants. Even this part is enjoyable to read because it's not clinical, but rather still part of the author's personal journey and his desire to help others by sharing his experiences. A great read! And further, an important one for anyone wanting to understand more about PTSD.

Very captivating. I have dealt with a lot of these same issues and it is really interesting to see how the author makes sense of it all. Funny as well at times. Must read for people who have ptsd anxiety issues and for those thinking about taking antidepressants. Important book.

The author had issues but not PTSD. There is no trauma. Very poorly written and narrated.