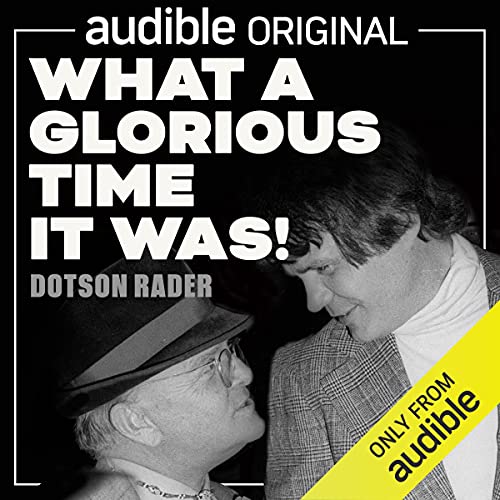 What a Glorious Time It Was!

By: Dotson Rader
Narrated by: Victor Bevine
Try for $0.00

Dotson Rader was first published in *The New Republic *while a student at Columbia University. He was Editor of Defiance: A Radical Review, and has written extensively for publications here and abroad, among them, Evergreen Review, The New York Times, Esquire, The Paris Review, Vanity Fair, the London Sunday Times and Parade. He is the author of four novels – The Dream’s on Me, Miracle, Gov’t Inspected Meat and Other Fun Summer Things, Beau Monde – and two books of non-fiction, I Ain’t Marchin’ Anymore, and Tennessee: Cry of the Heart. Rader’s new play, God Looked Away, starring Al Pacino and Judith Light, premiered at the Pasadena Playhouse. Dotson Rader is single, and lives in Manhattan.

Victor Bevine is an author, actor, and narrator who has worked extensively for over 35 years. His short film, Desert Cross, won accolades at the Athens International Film Festival. His screenplay, Certainty, was chosen for two writers’ conferences (LA Outfest, Hamptons International Film Festival) and served as the basis for his first novel, published in 2014. Bevine spent two seasons as artistic director of the Classical Theatre Lab in Los Angeles and has worked extensively with nonprofits in New York and Los Angeles teaching the power of storytelling to young people in underserved communities. As an actor, Bevine has appeared on and off Broadway at the New York Shakespeare Festival, Circle in the Square, and Playwrights Horizon. On the big screen he has appeared most notably in the adaptation of John Knowles's A Separate Peace, and has acted in dozens of guest and recurring roles on the small screen. A four-time Audie nominee, winner of multiple Earphones Awards, and over 350 narrated titles to his credit, Bevine is proud to be a member of the corps of Audible narrators helping to bring great storytelling to a new world of "readers."

What inspired me to tell my story?
"This is what it was like to be a young man in the decade of the '70s, living with the famous and unknown in the demimonde and beau monde of New York, open to anything, captive to the wonderful intoxication and decadence and dazzling promise of that time and place. The years between the ending of the Vietnam War and the coming of the AIDS plague were the most glorious, dangerous, exuberant decade in American history. It was a time of unparalleled freedom, sexual liberation, and creativity, an era unlike any other. In that decade we believed we were making a new world and letting the sun shine in. We believed it would never end. But it did end because of AIDS and Ronald Reagan. And as the bills came due, the bright and beautiful paid, and I saw the best lost to drugs, violence, disease, and despair. The rest of us lived on, never again to be as free nor as brave and good. But, oh! What a grand, exciting time to be young and in the thick of it! What a time!" –Dotson Rader, author of What a Glorious Time It Was!
ORIGINALS

These quotes from celebrated authors, poets, and innovators will spark breakthrough ideas.

What listeners say about What a Glorious Time It Was!

it wasn't what I expected. Talented but entitled people living a lifestyle with consequences. I guess that's one part of the seventies...

I loved this view of the times and people. Really good writing that got me right into the story. Narrator did a great job.

revisit my past history

I wish I had discovered this author sooner. he has provided such a cultural experience into my youth. I hope a lot of younger people read this.

Oh what a great tale this is

I adored every minute of this. I was there in New York at that time. I loved Dotson Rader's political commentary but didn't know he was so close to Truman capote and gay life in New York at the time. He captures the glory and sadness of it all. My only complaint is it was too short

A fascinating history of the gay 70's

This short listen was an interesting look at what it was like to be gay in NYC in the 1970's living among the famous and infamous. This biographical overview of the author's life during that time period is chock full of interesting tidbits about famous, authors, artists, and other personalities of the decade.