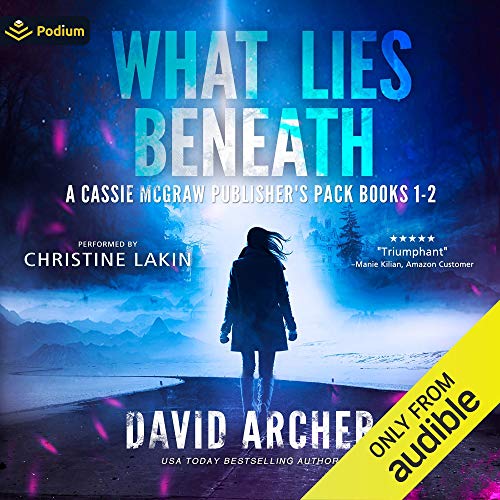 What Lies Beneath: A Cassie McGraw Publisher's Pack

By: David Archer
Narrated by: Christine Lakin
Try for $0.00

What Lies Beneath, Book 1:

Fresh out of high school and off to college, Cassie thought she had the world by its tail, and then she met Mike. Tall, handsome, and a police detective to boot, he swept her off her feet and into a whirlwind relationship that led to an engagement ring.

But things aren't always as they seem, and Cassie comes to discover that Mike has a dark side. When she learns just how dark it can be, she comes face-to-face with the greatest forward she could imagine, and it leaves her burned and scarred for the rest of her life.

Cassie isn't one to wallow in misery. She takes her experiences and a degree in psychology and sets out to help other women avoid the kind of thing that happened to her, but then one of her clients comes to her in desperation. Her abusive husband has kidnapped her daughter, and it's up to Cassie to find the girl before it's too late.

Of course, then the only trick is how to survive.

Someone is abducting and killing the abused women that Cassie works with, and it all seems to be aimed at hurting her. The police are stymied and can't find any leads, but Cassie is too stubborn to let this monster win. With the help of her FWB, Dex, she learns some things the police don't know, but that she can't reveal without getting herself into serious trouble.

After five women have gone missing, Cassie manages to identify the type of woman the perpetrator goes after, and decides to set a trap of her own for him. Using the prosthetic mask that makes her look almost normal, she uses herself as bait, but this is a man who is highly skilled at abducting his victims. Despite all her precautions, Cassie ends up having to depend only on herself if she has any hope of survival, let alone saving the lives of his other victims.

Cassie is a survivor, however, and doesn't know how to give up. This guy may be a serial killer, but he's never had to deal with the likes of Cassie McGraw.

What listeners say about What Lies Beneath: A Cassie McGraw Publisher's Pack

Loved it. Cassie is a great character as is Dex. can't wait for the next book. very much enjoy David archer books.

Better then a movie

Loved it! Christine did an excellent job bringing David's characters to life. Would like more.