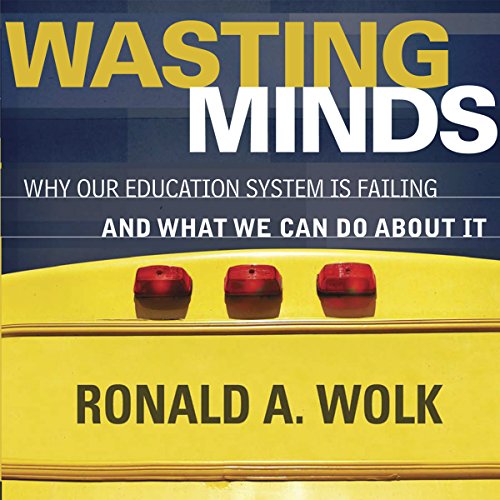 Wasting Minds: Why Our Education System Is Failing and What We Can Do about It

Why has successful school reform been so difficult to achieve, despite decades of well-intentioned efforts, endless rhetoric, and billions of dollars of investment? Why do most U.S. schools continue to produce disappointing results? Why is there such a disconnect between the schools we need and the schools we have?

In this thoughtful and insightful book, Ronald A. Wolk tackles these questions head-on, identifying key assumptions that have shaped the debate on school reform for the past several decades, including the emphasis on standards and testing, calls for a longer school day and year, the push to enroll more students in advanced math classes, and the quest to place a highly qualified teacher in every classroom. Backed by research and other evidence, he points out the flaws in each assumption, and then proposes alternative assumptions as the basis for new, innovative schools that would emphasize such elements as

Acknowledging that the current system is too entrenched to accept radical reform, Wolk suggests incorporating his assumptions into a separate, parallel strategy for new schools. The result is a provocative proposal for teachers, administrators, policymakers, parents, and others to consider as they contemplate the future of public education in the United States.

The book is published by ASCD.

“In the trench warfare surrounding school improvement that has raged for decades, Ron Wolk has worked as an embedded journalist who communicated to the rest of us how progress was lost and won. Reading Wasting Minds is like sitting at the feet of the sage of the movement as he separates the false from the true. The perspective he gives is invaluable.” (Professor Clayton M. Christensen, Harvard Business School and author of Disrupting Class and The Innovator's Dilemma)
“This book challenges the sacred cows of public education and seeks to change the way we think about schools. Ron Wolk offers logical, common-sense answers to the enormous educational problems facing us. Those responsible for finding solutions should pay close attention to what he says.” (Stanley Goldstein, founder and former CEO and Chairman of CVS Caremark Corporation)

What listeners say about Wasting Minds: Why Our Education System Is Failing and What We Can Do about It