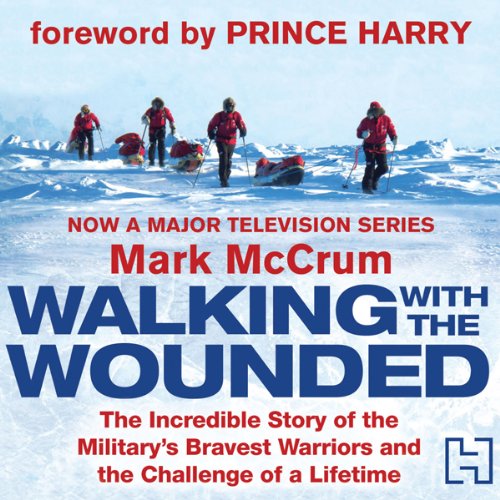 Walking with the Wounded

In April 2011, four soldiers - each a hero of recent conflicts who suffered devastating injuries in the line of duty - set out on a challenge that even an able-bodied athlete would balk at: a 200-mile trek, unsupported, to the North Pole. It was the culmination of a journey that began long before, when two friends decided to mount an expedition that would demonstrate how remarkable our armed forces are and raise funds for the rehabilitation of injured service men and women. Little did they know that their idea would ultimately gain global attention, and royal endorsement.

The year-long selection process was more physically and emotionally draining than anyone had anticipated. But by September 2010 the final team was set: the two founders, four wounded soldiers, a polar guide, and patron Prince Harry. Once they'd ventured inside the arctic circle, they had to contend with new challenges. Pulling sleds weighing more then 100kg over vast swathes of ice rubble, pressure ridges, and dangerous open water 'leads'; constant daylight; ground that could literally tear itself apart beneath them as they slept; and temperatures as low as -35 degrees. And all the time, they had to be alert for signs of the notoriously aggressive Polar Bears that roam the desolate landscape.

With every step fraught with risk, the trek tested its participants' resilience to the limit. Each of these brave men tells their story here, along with that of the extraordinary expedition itself: the rigorous training, the meticulous preparation, and of course, the final, awe-inspiring journey across the ice. They returned as heroes again - proof that strength of mind can be every bit as powerful as strength of body, and an inspiration to us all.

What listeners say about Walking with the Wounded

The synopsis is probably enough

This didn't live up to my expectations, which might say more about my expectations than the book itself. If you are okay with stories of male bonding via killing, drinking, and physical challenges then you might enjoy this more, but I didn't ever feel particularly engaged. They produced the event (walking to the North Pole) to raise money for injured soldiers which seems worthy, and yet somehow the book comes across more as a piece of slick promotion than an engagement with adventure and tough issues. The narrators are good.

Where does Walking with the Wounded rank among all the audiobooks you’ve listened to so far?

What was one of the most memorable moments of Walking with the Wounded?

Liked the chapter by Prince Harry

Great book well worth a listen to support the troops