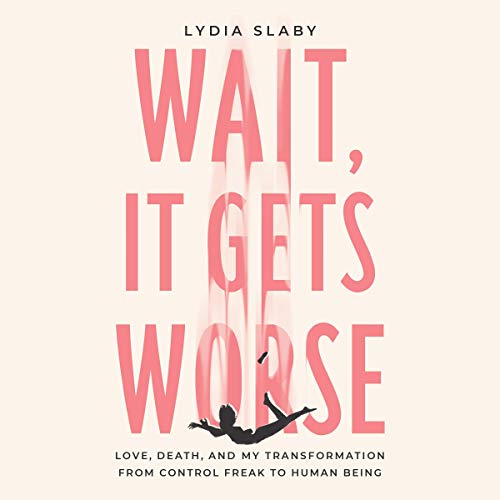 Wait, It Gets Worse: Love, Death, and My Transformation from Control Freak to Human Being

Wait, It Gets Worse: Love, Death, and My Transformation from Control Freak to Human Being

Lydia Slaby was 33 years old and had everything she believed would make her happy: three fancy private school degrees, a successful husband who was in the inner circles of Barack Obama’s presidential campaign, a high-paying job as an attorney - even an enviable yoga practice.

But under the surface Lydia’s life was in free fall. Her new marriage was one argument after another, she had a job she never wanted, and for some reason she had begun to rapidly lose weight, eventually turning a strange shade of yellowish-green.

When she made a doctor’s appointment to talk about the toll of extreme stress, she was instead admitted with a diagnosis of lymphoma. As a cancer survivor, Lydia tries to piece back together her marriage, her career, and her own worth. It’s an imperfect rebirth, but perfection is something she must abandon if she is to find a new calm, healthy life.

What listeners say about Wait, It Gets Worse: Love, Death, and My Transformation from Control Freak to Human Being

In her beautifully crafted memoir, Lydia Slaby manages to reveal the painful reality of battling cancer, with all its complications, as well as what her path toward recovery entailed. Her physical body, emotional state, spiritual awareness, relationships. She is generous with insights, humor and descriptions of true, human joy and sacrifice. Can't say enough about this woman's willingness to reveal her soul to the world and trust us all to embrace the emotion she has given so willingly to invigorate ourselves in our own lives.

Wow, what a struggle. Thanks for sharing. I enjoyed hearing your story. Good Luck and God Bless.

I learned so much from hearing this story