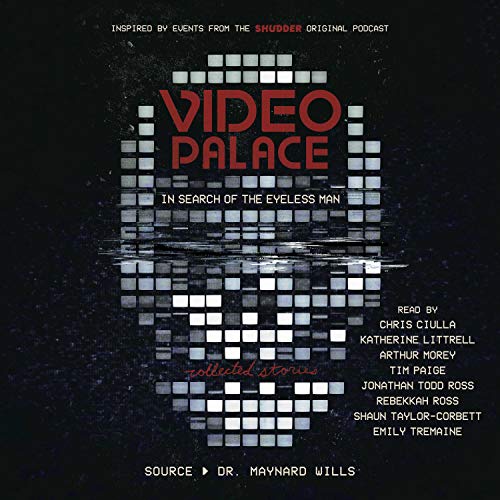 Video Palace: In Search of the Eyeless Man

A collection of chilling stories from the leading writers in horror and suspense, exploring elusive urban legends.

Join Michael Monelo, one of the creators of the Blair Witch Project, and TV writer/director veteran, Nick Braccia, on a journey through urban horror and suspense.

Explore the world of Maynard Wills, PhD, professor of folklore and fan of the podcast, Video Palace. The podcast followed a man named Mark Cambria, who along with his girlfriend Tamra Wulff, investigated the origins of a series of esoteric white video tapes. Cambria went missing in pursuit of these tapes, but not before hearing whispers of an ominous figure called the Eyeless Man.

Fascinated by the podcast and Cambria’s disappearance, Wills embarks on his own investigation into the origins of the tapes and the Eyeless Man, who he believes has lurked in the dark corners of media culture and urban legends for at least seventy-five years. As part of his study, he has invited popular writers of horror and gothic fiction to share their own Eyeless Man stories, whether heard around the campfire or experienced themselves.

Get swept away in this thrilling and terrifying horror anthology - which can be listened to on its own or as a companion to the hit Shudder podcast, Video Palace.

What listeners say about Video Palace: In Search of the Eyeless Man

I was happy to video palace proceeds creepy and scary thrills I loved this podcast which is why I love this audiobook, bob derosa and Ben rock are awesome

I got this book after finishing the podcast it's based on: the podcast itself had issues, but I enjoyed it. However, the book bounces between very poor and decent writing. Some of the stories are painfully contrived, others are fine, but nothing special. It all feels like very average "Creepypasta" offerings. I gave up for awhile at the Satanic Schoolgirl (or whatever) story because it was just too self conscious. I don't even necessarily disagree with the rhetoric being spewed, but the way that it was written, and the cringe worthy way the characters act and speak just lost me.

That being said, if you liked the book (or the podcast), give The Black Tapes a shot.

A great complement and follow-up to the podcast

If you've listened to the Video Palace podcast, or are a fan of horror or strange fiction, I am sure you'll love this collection of stories. All of the narrators do a fantastic job.

I Should Know Better

Got this because of the podcast. It's no different in quality. I feel like this is just a different way for a podcast trying to monetize their product. Bait & switch.

Acting and writing - donation level, no where near professional level.

This is a collection of small treasures. Each one is different. Several are about the cruelty and toxicity of online culture, a bunch capture a slice of life from growing up, but some are just good campfire stories, and they're all connected by a nice frame story. If you like the book there's also a podcast but this is such an indirect spinoff that you definitely don't need any familiarity with it going in. 10/10 recommend this.

For fans of the podcast

Not really a stand alone book, in my opinion, but rather, a collection of creepy pasta stories that fans of the podcast will enjoy.

Really enjoyed this follow up to the podcast. Great collection of stories. would love to see a sequel.

It’s so well done. Feels like the podcast! I want more. Please make another! Eerie, smart and creepy! Loved every word. The eyeless man is watching you.

This anthology surpassed the original podcast series, which was very original and compelling. Fantastic storytelling.