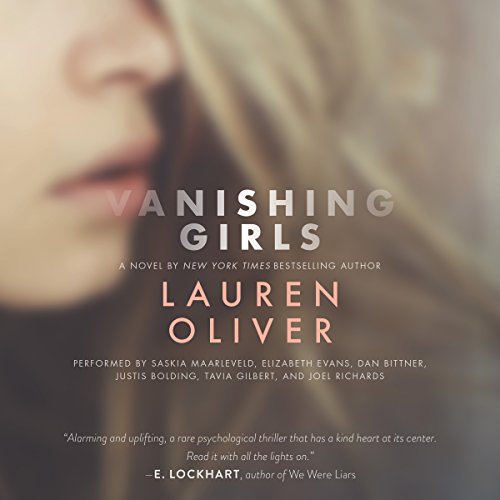 Dara and Nick used to be inseparable, but that was before - before Dara kissed Parker, before Nick lost him as her best friend, before the accident that left Dara's beautiful face scarred. Now the two sisters, who used to be so close, aren't speaking. In an instant Nick lost everything and is determined to use the summer to get it all back.

But Dara has other plans. When she vanishes on her birthday, Nick thinks Dara is just playing around. But another girl has vanished, too - nine-year-old Madeline Snow - and as Nick pursues her sister, she becomes increasingly convinced that the two disappearances may be linked.

In this edgy and compelling novel, New York Times best-selling author Lauren Oliver creates a world of intrigue, loss, and suspicion as two sisters search to find themselves and each other.

What listeners say about Vanishing Girls

I have a serious love/hate relationship with this author. I loved Before I Fall and the Delirium Trilogy but hated Panic and was seriously disappointed with Vanishing Girls. The plot twist in this book was so contrived that I saw it coming from a mile away. These sort of gimmicks rarely work and in this case it was an epic fail.

Do Not Get This

The story starts out interestingly enough but never rises above an R rated YA novel. About half way through you'll probably start thinking, "This isn't one of those book where it turns out..." but you'll say, "No Way! That plot twist has been done to death." So you'll keep reading and discover IT IS.

The plot twist/surprise ending is totally lame. Save your time and money. Just watch an episode of Law and Order because even they had an episode with this played out premise.

Not even close to as good as her other books

Not up to par with Lauren Oliver's other books. The story was boring until the final chapter which had a twist but didn't make up for the lack of story to that point. I'm a huge fan of the Delerium series and highly recommend all 3 of those books but wouldn't waste a credit on this one.

I enjoyed the book and when it got to the good Part it was really engaging, but it just took SOOO long to get there, I almost gave up a few times.

The narrator was Great! The story was good! I got a little confused & sad at times but it had a happy ending! If you have a sister it will make you take note & think. Thanks!

this story lacked something

I really kept hoping it was gonna get better pick up a little but it never did. The authors attempt at a twist fell flat because the story itself lacked depth.

the story is good, the plot twist and everything, it took me a while to puzzle everything, it did made sense once I reached the ending. I like how the author writes, very detailed. I didn’t mind how slow the story goes since these types of novel needs patience and understanding.

i thought i knew where the wnsing was headed and then it took me by complete surprise!! such a great book!

Felt like it took a while to pick up speed but the last 3 hours are a ride.