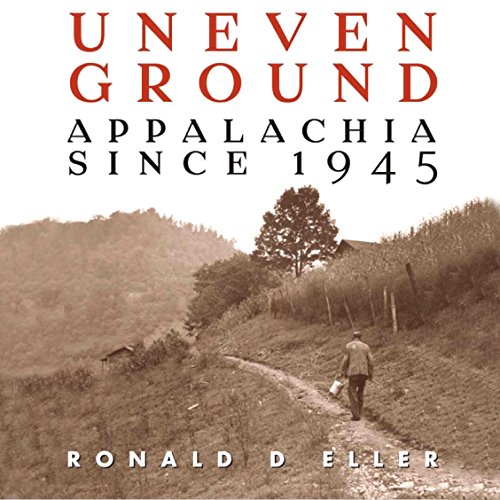 Appalachia has played a complex and often contradictory role in the unfolding of American history. Created by urban journalists in the years following the Civil War, the idea of Appalachia provided a counterpoint to emerging definitions of progress. Early 20th-century critics of modernity saw the region as a remnant of frontier life, a reflection of simpler times that should be preserved and protected. However, supporters of development and of the growth of material production, consumption, and technology decried what they perceived as the isolation and backwardness of the place and sought to "uplift" the mountain people through education and industrialization.

Ronald D Eller has worked with local leaders, state policymakers, and national planners to translate the lessons of private industrial-development history into public policy affecting the region. In Uneven Ground: Appalachia Since 1945, Eller examines the politics of development in Appalachia since World War II with an eye toward exploring the idea of progress as it has evolved in modern America. Appalachia's struggle to overcome poverty, to live in harmony with the land, and to respect the diversity of cultures and the value of community is also an American story. In the end, Eller concludes, "Appalachia was not different from the rest of America; it was in fact a mirror of what the nation was becoming."

What listeners say about Uneven Ground

If Harry Caudill's Night Comes to the Cumberlands is the gold standard of books about Appalachia, Uneven Ground by Ronald Eller is a solid silver medal finisher. It is my opinion any author would find it difficult to recount the history of Appalachia prior to the 1960's better than Caudill did with Night Comes to the Cumberlands, which is perhaps why Eller focuses his book after 1945. Eller does a great job In furthering the history of the region, and discussing the overall socioeconomic, political, and personal struggles faced by its residents. For anyone with ties and personal interests in the region, or who intends on living, or working in Appalachia this book should be required reading. The narration is very dry and unexciting, which doesn't help a subject matter which may be dry to start with if the listener isn't already personally invested in the material. This book can easily be listened to at 1.5x or 1.75x speed, which helps with some of the monotonous narration. Overall, though the narration is mediocre, this is a very good and well researched book with many important insights and observations about Appalachia.