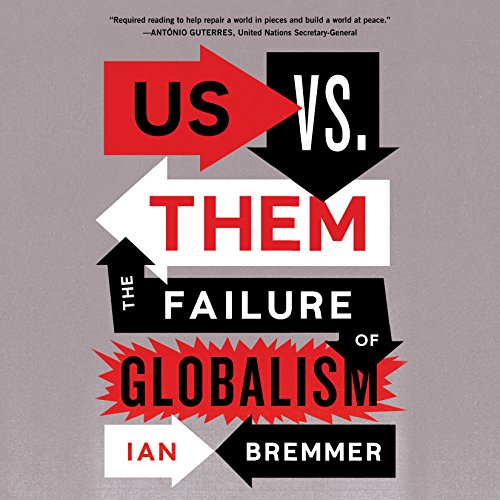 By: Ian Bremmer
Narrated by: Willis Sparks
Try for $0.00

From Ian Bremmer, the acclaimed Time columnist, Eurasia Group president, and expert consultant on global risk, comes a definitive guide to navigating the dangers of the age of populism.

From Brexit in the UK, to Donald Trump in the US, to extremist parties in Europe and the developing world, populism has dominated recent headlines. What explains this rise of leaders who stoke nationalist anger in their countries, from Le Pen to Erdogan? How long will the populist wave last? Who will be the winners and losers in this climate, and how can we defend the values of democracy, free trade, and international cooperation?

No one is better suited to explore these questions than Ian Bremmer, who has built his career on assessing global risk for his clients, and explaining complex political dynamics in accessible terms in publications such as Time. He explains the social, economic, and technological forces fueling this new wave of populism and why we're witnessing a rejection of the democratic, global cosmopolitan trends of the late 20th century.

Bremmer argues that, much like climate change, the rise of populism around the world is inevitable, likely to spread wider and worsen over the coming decade. But despite this bleak assessment, he also sees a light at the end of the tunnel. This audiobook offers a guide to navigating the shifting political landscape and weathering the populist storm.

“The best book yet on the waves Donald Trump rode to power. Ian Bremmer is right that rage and scorn are not plans. He provides good practical ideas for what can be done.” (Lawrence Summers, professor at Harvard’s Kennedy School of Government and former director or the National Economic Council)

“My favorite thinker on geopolitics offers a masterful analysis of why globalism crashed and populism has soared. This book won’t just help you predict the future of nations; it will play a role in shaping that future.” (Adam Grant, author of Give and Take, Originals, and Option B with Sheryl Sandberg)

"Once again, Ian Bremmer provides a striking preview of tomorrow's top stories. A timely warning, but also a source of hope, Us vs. Them is required reading for those worried about our world’s future." (Nouriel Roubini, author of Crisis Economics; professor at New York University’s Stern School of Business; chairman of Roubini Macro Associates)

What listeners say about Us vs. Them

Felt it was a very well written, concise overview of Bremmer's highly informed worldview. Excellent narration also. Very worthwhile for anyone interested in what's going on around the world in 2018 and what is likely to start happening soon. Not sure why so many struggle to grasp the insights he brings to bear. They're so straightforward when you see them!

That said, I think the exclusion of the militarism that is helping precipitate the current situation should have been addressed. Makes me significantly less enthusiastic about recommending it.

This book should be common sense to anyone born within the past 40 years. It also doesn’t go into depth at all about any of the topics it covers. It’s basically an extended TV news interview.

Not worth anyone's time or money, this book offers opinions (surface level ideas) instead of facts but pretends it's presenting the latter. No historical or other context, just here-and-now account of things that dives no deeper than just going with the motions but clothes itself in bombastic language. Truly depressing, how little actual substance can pass for a title these days

Great read. unbiased and intelligent. Narration is superior. A must for every American in this age of uncertainty.

Learned nothing. Much pontificating and hypothesizing without substance. A veiled political mantra with no substance

meh. Nothing particularly new or different.

Fast and loose with statistics based on surveys. This book COULD have been great but is only average in insightful content.

Interesting analysis of our times, but depressing

Full of troublesome facts, like a majority of Republicans would support delaying the 2020 elections, if Trump wanted to. Like there are twice as many working age men in America not working as are working and half of them take painkillers everyday. Like the majority of young people would support a government run by the military. And these trends are worldwide. Thoroughly depressing. Makes me even more worried about my grandchildren’s future.

Not enough in depth analysis

yet again Ian has given a completely different perspective on the current world view. really good book

The book reads like a fair assessment of what is going on around the world with rising populism, a rejection of globalization and turning back on multi national organizations and cooperation. But that’s where it feels like this book stops while it should continue. It does a fair job of diagnosing current problems, and predicting the difficulties that are likely to come as these trends continue. But by not prescribing ways that humanity can avoid the that future state, the book becomes a pessimistic treatise on today’s issues that left me depressed about the next 10-20 years.