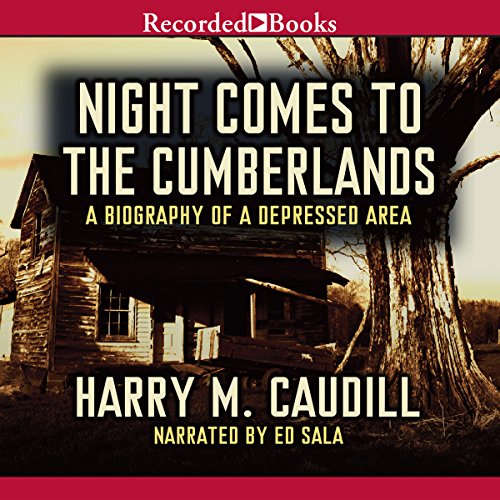 Night Comes to the Cumberlands

After its publication in 1962, Harry M. Caudill’s acclaimed portrait of the southern Appalachian Mountains became a rallying cry for action against the poverty plaguing the region. Here Caudill explores the area’s history, from its first settlement to the Civil War, and from the rise of coal barons to the economic despair of the 1950s and 1960s.

“[A] masterpiece of cogent argument for specific solutions to specific problems.” ( Kirkus Reviews)

What listeners say about Night Comes to the Cumberlands

I have several issues with Caudill’s broad-sweeping generalizations of the Appalachian people, but the book does a good job going through the history of the region and describing the impact of exploitative coal companies.

Essential For Those Who Care About Eastern KY

Yes! This book should be essential reading for anyone who plans to work or live in the Appalachian region, especially Eastern Kentucky. I know this book was released in 1963, but in many aspects time has, unfortunately, stood still in the Cumberlands. Many of the problems that confronted the region in 1963 still harass the population today, and have perhaps grown worse. Harry M. Caudill does a great job at relaying the history of the region, and explains how the culture of the region was formed, much of which was unknown by me, and I was born and raised in that region.

The only character in this book is really Appalachia/Eastern KY, itself, and its population. You will be at times awed, inspired, and enraged over the treatment of Eastern Kentucky's land and people. A chapter is entitled &quot;The Rape of Appalachia&quot;, but in complete honesty that title could apply to a vast majority of this book.

What does Ed Sala bring to the story that you wouldn’t experience if you just read the book?

Ed Sala does a masterful performance at articulating the tone of this book, and he effectively encapsulates Henry Caudill's vision of Appalachia. There are times he has to read quotes from natives of the region, and his subtle voice-change sincerely conveys the emotions of the quoted individual. The only reason I gave his performance a 4 out 5 stars is because his voice may not be enjoyable to every listener, as I will admit it took me an hour or two to appreciate his narration.

There is so many insights in this book for anyone who cares about, is from, or intends to work or live in Appalachia. The settling of Appalachia/Eastern Kentucky was more violent and godless than I was led to believe as a child from the area. The book unfortunately doesn't go into great detail about the Native Americans who were in this region before America started moving westward. The most surprising aspect of the book is in discussing the impact of the coal industry. Being born and raised in the region, a love of coal was instilled in me subconsciously; however, this book delves into the inhumane treatment of coal worker's by coal executives, who trapped their employees in a viciously hopeless cycle of generational poverty. I no longer understand the infatuation Appalachia/Eastern Kentucky has with an industry that has taken ruinous advantage of the greatest resource it has: its people.

With all the attention given to the struggling white Americans who voted for Trump, this book should be required reading. And undoubtedly it should be read before HillBilly Elegy or White Trash or any of the other books that feebly attempt to understand the minds of poor white Americans.

This is a regional history of the part of Kentucky covered by the Appalachian mountains. Caudill goes all the way back to the beginning to introduce us to the fiercely independent rough hewn Scotch-Irish and English settlers who inhabited Appalachia since well before the Revolution. He peppered his book with songs and stories he’d heard in the course of his life, as he himself was native to the area and a Highlander by heritage. You’ll hear how they survived and thrived, and were kicked in the gut, time and again. By the end, you will understand WHY these people are often dependent on public assistance and WHY they have learned to grab onto any shred of help, whether honestly or dishonestly acquired. It’s an astonishing tale, and Caudill tells it with empathy and realism. He doesn’t mince words about the frailties and flaws of the mountain people but by the end you’ll have compassion for them and an understanding you couldn’t possibly get any other way.

The narrator of this book is ideally suited for the task. He sounds like he might be the author, but of course he’s not.The book is long but he never loses interest in the subject and tells it like he wants you personally to know this story.

The book was written in the Kennedy administration, so it’s quite old, but the history is not one you’re likely to get reading a current book about the Appalachian people. Just ... outstanding. I was ignorant of this aspect of American history and now I know a whole lot about it,

A brilliant man of his era describes the roots of the Cumberland culture, the exploitation by outsiders, the lack of educational and financial resources to fight back, the fickleness of the coal market, the debilitating community structures, the goods and bads of family loyalties, the incredible state governmental systems, the physically broken, the spiritually exploited, and the successes and failures of the Kennedy-Johnson programs of Federal assistance. Caudill is fiery, discursive, and knowledgeable. His chapter on remedies is pessimistic and prescient. Not enough has happened in the past half-century to hope for improvement. I remember thinking the best thing that could happen is for everyone to move away and start over. The tales of the tangle of political corruption and arcane laws alone will probably convince you, too. Highly recommended.