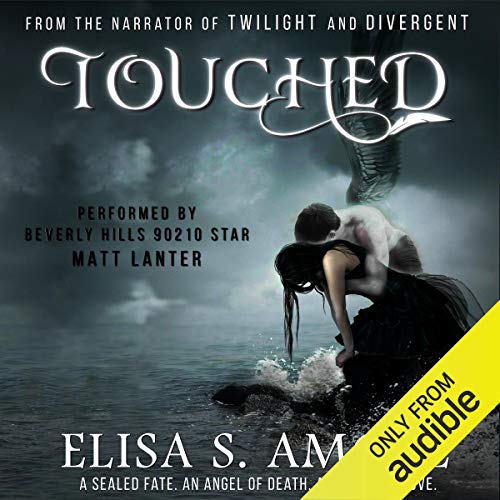 The number one best-selling series everyone's talking about.

What are you willing to sacrifice when the only person who can save you is the same one who has to kill you?

Evan is a Soldier of Death and his assignment is to kill Gemma because her time has come.

But what if he falls in love with her?

Can love rebel against fate?

As seductive as Meet Joe Black. As mysterious as City of Angels. As powerful as Twilight.

Number one in Best Paranormal Romance/Urban Fantasy on Goodreads

What listeners say about Touched

I only finished this book to write a review. the main character had no growth, was not an asset and frankly I was hoping she would have died in the end. This story was about a useless teenager who had an unhealthy obsession with a boy. I would not recommend this book! It goes no where and not worth the price.

i think i could listen to any book that emma galvin reads and enjoy it. she can bring any book to life.

Best story in a long time

This is the best story in a long time! Can`t wait to read the rest of the saga!!

I love this book, it was so romantic.
I really hope they make this book into a movie.
Matt Lanter was awesome as the narrator. Cant wait to read the other books.

this was a great story that tugged at your heartstrings! it had just the right amount of thrill, passion and twist! Just when you thought you knew what was going to happen next it changed! I really enjoyed the two narrators, I'm glad that a man narrated Evan. it's so weird when s woman tries to narrate a guy. over all I give it 5 stars! I'm almost scared to read the next book because I'm not sure if it will be as good as this.

Great story and fantastic premise. I love Matt Lanter's voice. This story had everything romance,action,great plot and it leaves you wanting more. I love Elisa's writing. Superb

Can’t get past the first chapter

The narrator is amazing, except for the fact she sounds like a 12 yr old boy. Just couldn’t get into story line. This is a young adult book. The verbiage is more 4th year college level. No teens think or speak like this.

the cover is just as good as the story it's self

I like how the author bounces back and forth between who's point of view the story is told from. then adding in the switch between a male and female narrator helps emphasize the change in characters.

loved the first two books of this series.....wish the whole series was on audible since I am able to listen to books while I am working.

I got the book as I like the genre & it had some good reviews. However I found it a very slow burn, & found myself waiting for something to happen - it didn’t, not really. I finished the book out of curiosity more than anything & I don’t like to leave books unfinished.

I dont normally read these type of books but was looking for a change in a one off book. this book was brilliant! interesting storyline and very well read. This book has made me do something i have never done before; i have brought the following 3 books! Must read!!!!!!!

I think this must be for teenagers. I loved the Afterlife saga and this was recommended to me when I'd finished that series. I managed to listen for about three hours and had to return the book. The female narrator sounds like a 12 year old boy and has such an annoying voice. I couldn't bear up listen to her any longer. The story is so slow and boring and full of romantic cliches. The characters are stereotypical teens full of angst and exaggerated feelings. I've never disliked a book as much as this.