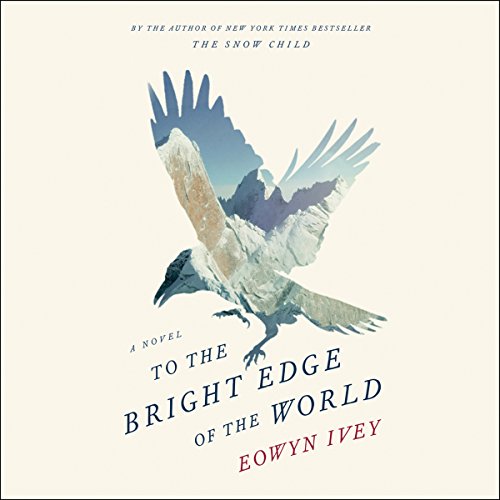 To the Bright Edge of the World

From the best-selling author of The Snow Child, a thrilling tale of historical adventure set in the Alaskan wilderness.

In the winter of 1885, Lieutenant Colonel Allen Forrester sets out with his men on an expedition into the newly acquired territory of Alaska. Their objective: to travel up the ferocious Wolverine River, mapping the interior and gathering information on the region's potentially dangerous native tribes. With a young and newly pregnant wife at home, Forrester is anxious to complete the journey with all possible speed and return to her. But once the crew passes beyond the edge of the known world, there's no telling what awaits them.

With gorgeous descriptions of the Alaskan wilds and a vivid cast of characters - including Forrester; his wife, Sophie; a mysterious Eyak guide; and a Native American woman who joins the expedition - To the Bright Edge of the World is an epic tale of one of America's last frontiers, combining myth, history, romance, and adventure.

What listeners say about To the Bright Edge of the World

For me this book was too heavy on the myth, the romance and the supernatural. The letters and journal entries were confusing and nonlinear. If you decide on giving the book a try it is imperative to pay close attention to the dates announced with each narrator change. If you don't you will find the whole thing hard to follow as the story jumps around through time.

I would have liked more history and a tighter story line. For example, things like the lack of attention and detail about the actualities of the "row boat" the men used on the exploration of the river weakened the story. The fact that the men in reality would have portaged thousands of pounds of gear, lined (dragged by ropes) what was most likely a Columbia boat along miles of icy river banks and then did not freeze to death when submerged "to the neck" in the "frozen" water--just to mention three things missing from the story--was disappointing. I understand that Columbia boats--used during the time of this story--in the Pacific Northwest were lighter and easier to portage than the York boats of central and eastern Canada--but still they weighed thousands of pounds loaded. This would have been a terrible job--but all we hear is that the men carried their packs???

For me, there were too many missed opportunities for accuracy and historic detail that mattered to the story being told. Only for readers who love epistolary romance novels heavy on supernatural myths.

Let me start by saying Eowyn Ivey's novel "The Snow Child" absolutely captivated me so I was looking forward to the publication of this book. It is a very different kind of novel but also fascinating and brilliant. It helps that I do love a good Alaska story and this one does not disappoint. I will admit I had some trouble getting into it at the beginning, but once I did I was completely immersed in the story. It is a great book and the readers are wonderful. I highly recommend.

LOVED IT.
Expository novel in alternating voices: The journals of Colonel Allen Forrester, on an expedition to explore an uncharted region in Alaska in the late 1800's, and his wife Sophie, who wishes to be with him but remains behind in the army barracks of Vancouver, Washington, pregnant; in between these alternating journal entries are the modern day letters between Forrester's descendent and a museum curator in Alaska. Expository novel + magical realism (Ivey incorporates many Alaskan Native myths into the narrative) probably makes it something not everyone will like, but I loved it.

The audiobook was a good production, each character having their own narrator. [I think the thing that bothered me with some audiobook narrations with male narrators is when they voice female characters it reminds me of the "Kids in the Hall" when they do skits with female characters.] But the actual book is worth checking out, as it has maps & (photoshopped) photos and old-style advertisements spread about.

I'm starting to read a lot of these novels with the eye of an aspiring writer, and with this novel, it has to be incredible the amount of research Ivey put into it, even as an Alaskan. Early Alaskan history, expedition journals, both Russian & American, early photography, native lives & myths, the geography...mid-1800 military life...ornithology...Mindboggling.

The audio sample of this book does not due it justice. In fact if I only had that to go by a never would have read it. Through journals and letters the author weaves the narrative of an early explorer to the territory of Alaska and his wife. We also hear the voices of his nephew and museum director who is part Indian as the make sense of it all. Along the way we learn about the Alaskan territory, it’s spirits, beauty and hardships during a time of great change.

Yes, with qualifications - some of the voices were distracting, yet the story had some beautiful passages.

Alan Forrester was the most honest, thoughtful character. He reacted humanely to events and thought about people and circumstances during his days and recorded all of this in his journal with clarity and insight. The person reading his part used voice and timing well for the book's character.

Not all of it - some slow places in the photography descriptions. Also, some of the voices seemed forced as they tried to mimic certain accents. This was not a pacing problem, but it was annoying.

Yes, when Alan saw the light on the bird's wing in Sophie's photo and voiced his reaction to her letter and her first photograph. Also, his reaction to the woman nursing her baby toward the end of the book, (the wife of the missionary who was quite lonely) - this passage was charged with emotion.

The story itself was a challange for me to listen to, as the mystical parts felt unnaturally placed, did not quite flow with the realistic parts of the story.

I loved this book, as an Alaskan it touched on many of the complex questions and perspectives that come from the telling of Alaska history. There was a humanity to it that I appreciated.

I was thoroughly engrossed in this story, with its rich characters, complex relationships, vivid descriptions of Alaskan landscapes and parallel journeys taken by husband and wife, Allen & Sophie Forrester in the late 1880s. I liked the way the author tells the parallel stories from various viewpoints. Portrayals of Alaska are well written and vivid. I highly recommend this title

I really enjoyed this book and would recommend the audible book plus looking at the book because there are pictures that correspond to the story. I kept thinking about an ancestor I have that left his wife and children to "discover" Alaska in the early 1900's. Makes me want to learn more about his adventures. Loved the book!

I'd recommend this one in hard copy

I love audiobooks, but wish I would've read this one in its actual paper version. The book has pictures and maps that add some nice visuals to the story. Also, I wasn't a big fan at the way Christine Lakin read Sophie's part (which is a large segment of the story). I thought Sophie's character could use a more &quot;grounded&quot; voice... I get that Sophie has a fervent soul with a wide current of transcendentalism, but she didn't need to be as breathy and girlish. As a woman, I guess I'm a little picky and want all my strong women characters (which Sophie certainly is) to be represented that way. It was harder to respect her. It feels like sort of a petty complaint for a book that I certainly enjoyed.

Warmed up slowly, but well done

Having enjoyed the The Snow Child, I was eager to see if this second effort would meet my expectations for another magical tale of the Alaskan wilderness. In the early chapters I was worried. For one thing, I had seen no indications that this is a story told exclusively through letters, diary entries and miscellaneous book excerpts. In the beginning this lent the story a very choppy rhythm that stalled my ability to form a relationship with the main characters. I did eventually warm up to the format, but it was over an hour into the story before I felt engaged enough to commit to finishing – up to that point I was unsure if I would.

But I did become engaged, and that commitment grew stronger as the story went on, especially as Colonel Forrester’s expedition got well underway and Ivey’s love of the wilderness asserted itself in that part of the narrative. As the explorers pushed through the Wolverine River territory, we learned more of the native culture and mythology, bringing in a bit of shamanic magic that touched both the explorers and Sophie Forrester, waiting behind in Washington Territory for her husband’s return. Her mundane existence in the army barracks as a military wife did not suit her own adventurous nature, so she carved out a unique place for herself in that insular community, scandalizing some, but drawing admiration from others.

As with The Snow Child, the magic of the tale is offset by the harsh realities of an unforgiving land of few resources. Personal sacrifices and unsentimental decisions were necessary for survival, with no guarantee of a successful return. In the end I found my expectations well rewarded by the fullness of the story, augmented by excellent narration by all of the readers. BTW - The PDF download adds a visual interest to many parts of the story, especially the maps and photographs.