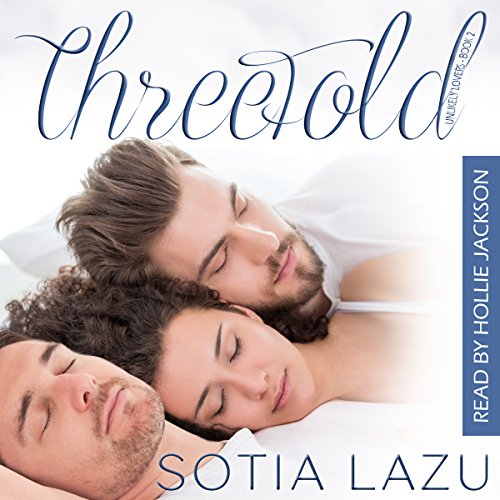 By: Sotia Lazu
Narrated by: Hollie Jackson
Try for $0.00

Colin Daniels is shallow, and proud of it. He only concerns himself with people who live up to his standards of beauty, and his best friend's new girlfriend is found lacking. Which wouldn't matter, if Colin didn't find her sexy despite his better judgment.

Miller thought he was being attentive to his girlfriend's needs when he talked his best friend into having sex with her, but if Becca's taught him anything, it's to be true to himself.

Becca Keith was never a one-man woman until she met Brad. When he comes to her with a confession and a suggestion, Becca has to choose. She can stay with Brad, leave him, or give in to something that might make her happy beyond her wildest dreams.

What listeners say about Threefold

Sizzling story and so much more

What a sizzling story this one was...I mean I knew I should have expected that with the title and all but this storyline has so much more going for it than just the steamy chemistry. Colin and Brad have been friends for years and Brad now has a girlfriend Becca who is being introduced to Colin (who is also a confirmed bachelor). Colin does not understand Brad's relationship but soon is presented with an offer that would make all his dreams come true - only he's scared that giving into his desires will only mean disaster in the long run.

These characters are amazing. Each has their own strengths but due to past experiences also have vulnerabilities that I feel like the author did a great job of introducing into the storyline. There is of course plenty of steamy scenes and chemistry but also a lot of character growth and acceptance found within too.

The narration was well done and I enjoyed the vocal changes that went along with the separate characters which made it easier to hear who's point of view we were listening to and who was speaking - really brought out these characters.

I received a free copy of this book and am voluntarily leaving a review.

Threefold by Sotia Lazy was a good read. Colin is a very shallow person and is very proud of that. He meets his best friends new girlfriend and things start going a way he never expected. I enjoyed reading this book.

Sotia is a new author to me. I received a copy of this book for an honest review.
I have to admit, I was skeptical going into this book. However, I had no reason to be.
I was shocked at how much I liked this story!
The author definitely has a way with words.
This story is sweet, sexy, and scorching hot!!
I have to tell you, there's so much more to this story then just the sexiness. The characters have background and depth.

This is a story about a fairly new couple, Brad and Becca, who are at a point in their relationship where feelings are starting to happen and boundaries are becoming blurred.
Becca's 30th Birthday is approaching and her boyfriend Brad wants to give her what she's been wanting but sharing his girlfriend is something he'd never thought he'd do.
As Brad thinks about this request from his girlfriend he can't help but to think of his best friend Collin and how much he'd love to share Becca with him.
But as the three come together to discuss this situation it becomes obviously clear that there's more to the story then what's on the surface.
Collin has been friends with Brad for six years and now that he's put in a situation that puts him so close to his best friend in such an intimate way, he's questioning what he really wants and how he really feels.
I highly enjoyed this story and watching each character unfold and go through self discovery.
There is humor, angst, and loads of flirty fun.
This story was definitely enjoyable and perfect if you're looking for a short story that will give you the full bang for your buck!!
I loved how everything played out and I really did enjoy all the characters.
You will love Becca and her brutal honesty, Brad and his good guy charm, as well as Collin and his alpha attitude with his wicked need to be in control.

Narrator Hollie Jackson did a great job!
She was able to tell the story from all three characters points of view and made it easy to follow along and get caught up in the story.